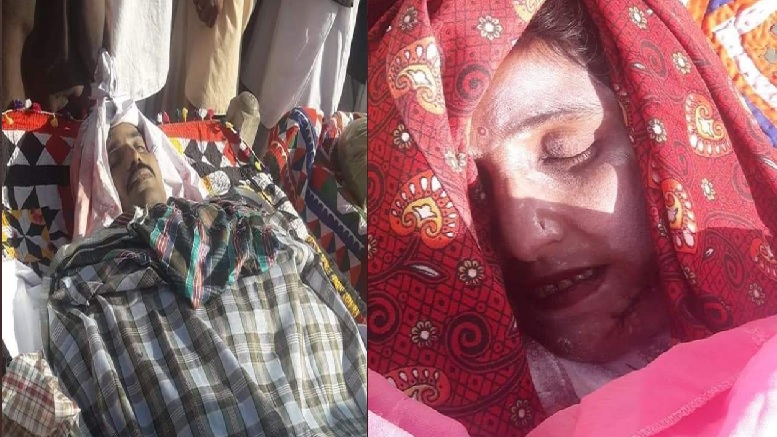 A five-member Hindu family in Pakistan was found dead with their throats slit under mysterious circumstances on Friday. The bodies were found in Abu Dhabi Colony, 15-kilometre away from Rahim Yar Khan city of Punjab province, reported The News International.

Police have recovered some of the murder weapons used in the killings, including a knife and an axe. Social activist Birbal Das in Rahim Yar Khan told The News International that one of the victims, Ram Chand, was a Meghwal Hindu around 35-36 years old, running a tailoring shop. He was a peaceful man and lived a happy life, and the incident has left locals shopped.

It is amazing that such a brutal incident has occurred but scant details have emerged in mainstream media of both Pakistan and Bharat. If the same had occurred with a minority family in Bharat, there would have been an international outcry by now, and Western governments and NGOs would have expressed their condemnation of ‘plight of minorities.’ But since the incident has occurred in Pakistan, the Hindumisic English-language media in Bharat and US & other Western powers who regard Pakistan as a crucial partner for their geopolitical goals, are both treating this as just another crime.

We don’t even have details of who else was murdered apart from Ram Chand. But a Hindu human rights activist on social media has shared images of the murdered family which tell us that one woman (probably Ram Chand’s wife), a young girl and a boy were 3 of the other victims. (warning: disturbing images)

This is the Hindu family that was murdered yesterday in their house in Rahim Yar Khan, Punjab in Pakistan. Police have recovered the knife and ax used in the incident from the victim's house.
GraphicContent: pic.twitter.com/0vTw0tcjRM

While abduction, rape and forced conversion & marriage of minor Hindu girls is the most dastardly form of oppression of this hapless minority population, murderous attacks and lynchings of Hindus on pretext of blasphemy (against Islam) or something else are also common in Pakistan.

While the murder of Ram Chand’s 5-member family at least made it in the news, the murder of Mahesh Kumar from Jacobabad, Sindh, or the brutal thrashing given to 13-year-old Krishna Meghwar by his Muslim neighbor for ‘blowing dust’ towards him while Krishna was brooming outside his shop in Sindh, or the Hindu father-son duo abducted and assaulted by goons in Khairpur, Sindh, are all stories that never made it beyond Hindu activists on social media.

Meanwhile, a report submitted to the Supreme Court of Pakistan on February 5 has revealed that most of the Hindu holy sites across the country were in a state of decay. In December last year, a temple in Terri village in Khyber Pakhtunkhwa’s Karak district was torched by members of Jamiat Ulema-e-Islam party (Fazal ur Rehman group).

Can some Hindu politician in Bharat consistently raise the persecution of Hindus in Islamo-fascist nations like Pakistan and Bangladesh in Bharat’s Parliament to at least make Hindus aware of what awaits them in Muslim-majority theocracies? When Pakistan PM is frequently ranting falsehoods about Bharat and ‘RSS-Nazi fascism’, isn’t this the least Hindu politicians can do?