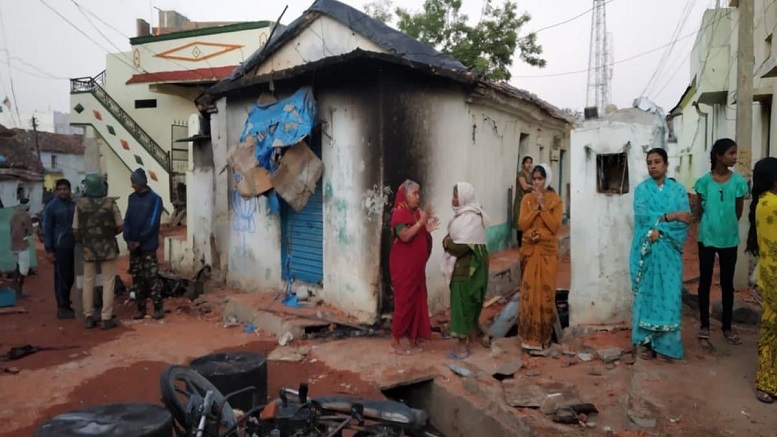 A communal clash has been reported from Bhainsa town in Nirmal district of Telangana. This is the 3rd such incident of communal violence from the town, where the Muslim community accounts for almost half of the total population, in the last 14 months.

There are two versions of what sparked the violence last night. As per News 18, violence broke out after nearly 50 people from two groups came to blows outside a mosque after a heated argument between a biker and another person after 11pm.

However, local reports indicate that a seemingly contrived dispute in Zulfikar Colony of Bhainsa town escalated into a major conflagration. Around 7.30 p.m. on Sunday, few youth were driving around in noisy motorcycles whose silencers had been removed. This led to residents of the colony asking them to stop creating the ruckus, as farmers and other agricultural workers were taking rest after a hard day’s labour.

As is often the case, this minor objection to provocative actions became an excuse for radicals to indulge in wanton violence, and later the other side too retaliated. Soon the violence spread and stone pelting was reported from Julfekar Galli, Kubheer Road, Ganesh Nagar, Medarigalli, Batti Galli, Panje Sha Chowk, Korba Galli, Town Bus Stand and other areas.

Youth of a particular community burnt down two auto rickshaws, one car and two two-wheelers. Brandishing swords, they were seen roaming freely. Few houses and one vegetable shop were burnt down. Media persons who went to cover the violence were attacked with swords.

In this attack on journalists, Deva, Vijay and Prabhakar from Andhra Jyothi, Eenadu and Raj News respectively were injured. As the first two journalists were injured seriously, they were rushed to Nizamabad district HQ hospital. At least 10 people, including 3 policemen and 3 journalists, were injured. Police said around 100 suspected persons were taken into custody, while the condition of those injured is stable.

BJP Telangana state president Sri Bandi Sanjay strongly condemned the violence and took the administration and Telangana government to task, asking whether we are living in Bharat or in Pakistan?

History repeats in this AIMIM stronghold

This incident has parallels to the violence seen in January 2020, which occurred on the last day of a 3-day ijtema (Muslim religious congregation) organised by fundamentalist organisation Tablighi Jamaat in district headquarters Nirmal. In the lead-up to that violence too, bikers had troubled local Hindus by making loud noises at night, and picked up a fight when people objected.

At least 13 houses, 24 two-wheelers, a car and an auto rickshaw were completely gutted – most of them belonging to Hindus – in that violence. Locals reported the presence of a known associate of an AIMIM strongman Jabir Ahmed, vice-chairman of Bhainsa municipality and AIMIM councilor, with the mob. Victims and their neighbours had said that the violence was linked to the Tablighi Jamaat gathering, and many outsiders shouting Allahu Akbar and some other slogans which they couldn’t understand, were also part of the mob. AIMIM won the municipal elections which followed soon after the orchestrated violence.

Bhainsa witnessed communal violence in May of last year as well, after reports of disturbance outside a religious place. In October, Ameer, son of the same Jabir Ahmed, was booked for assaulting a Hindu woman Devbai over a property matter in Bhainsa town.

MP Asaduddin Owaisi led Islamist party AIMIM, a spawn of the Razakar movement which tried to merge the princely state of Hyderabad with Pakistan, is an ally of ruling TRS in Telangana. Nirmal is the place where Asaduddin’s younger brother, MLA Akbaruddin Owaisi, gave his infamous “remove police for 15 minutes, and we (Muslims) will show you (Hindus) who is powerful” speech in Dec, 2012. The junior Owaisi has also abused Bhagwan Ram, questioning his birthplace, and incited Muslims to violence by asking them to hit out without worrying about consequences.

The competence and integrity of Telangana Home Minister Mahmood Ali is also being questioned in the wake of such repeat instances of violence pre-dominantly targeting the ‘majority’ Hindu community. More than Ali, his grandson Furqan Ahmed, an engineering student, is famous for throwing his weight around – assaulting fellow students and making Tik Tok videos threatening senior police officers to ‘respect him’.

A few days back some ‘right wing’ celebrities were proclaiming Asaduddin Owaisi as a ‘rational and intelligent’ voice because he criticized the dowry system and domestic violence prevalent in Muslim society, after a young Muslim girl committed suicide in Ahmedabad.

One flash of sanity, that too couched in terms of what is permissible in Islam, was enough to wash away the tide of bigotry which this London-educated Islamist carries. As a member of the regressive AIMPLB, Owaisi remains a staunch proponent of the medieval instant triple talaq law which the secular state of India finally abolished few years back. He calls for Muslim women to wear burqa and hijab, bats for  madrassas and maulvis who he claimed played the main role in the freedom struggle, and crudely mocks the Government of Bharat saying it is subservient to Allah. This Islamist thug has even issued open dawah (invitation to convert to Islam) to Hindus, and threatened the country with a ‘third wave of radicalization’ (aka Islamic terror) after the 2012 Assam riots.

Will the Bhainsa violence be reduced to usual political slugfest, or will Hindus learn deeper lessons beyond politics from it?