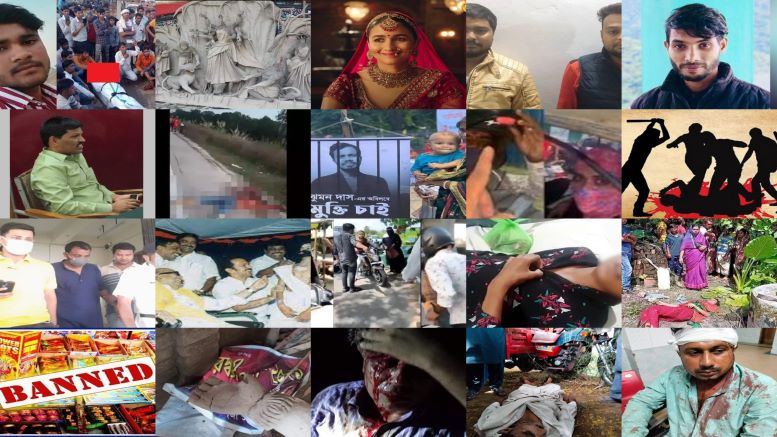 In this weekly summary for the period from 19 September to 25 September 2021, we hope to provide a snapshot of such crimes and hopefully awaken more people around the world to this human rights crisis:

1) Mohammed Akhtar Hussain, a married man with children, from Siliguri has been arrested by West Bengal police on account of two murders. Both the victims are Hindu women with who the accused had relationships and later killed in cold blood.

2) Attacking Hindu rituals in the garb of making a feminist point has become a trend these days and multiple brands have been hopping on the bash-Hindu-rituals bandwagon. Taking no notes from Tanishq’s ad fiascos, clothing brand Manyavar took to hurting Hindu religious sentiments through their latest commercial.

3) A Hindu man was assaulted in Bengaluru for giving a ride to the Muslim woman working with him. 2 Muslim youngsters involved in the incident have been arrested after the woman lodged a complaint with the police for harassing her. The woman had requested her colleague to drop her at home as it was late and they encountered the stalkers around 9.20 pm near Dairy Circle, Bengaluru.

4) A married Sikh woman was lured into a live-in relationship by a Muslim truck driver. When the woman started to pressure him for marriage, he decided to get rid of her in the most cold-blooded way.

5) 17-year-old Yogesh Jatav finally succumbed to his injuries after fighting for his life for three days. On September 15, the Hindu SC youth from Alwar was lynched by a Muslim mob. They accused him of hitting a Muslim girl while riding his bike. However, as detailed reports reveal, he was only trying to skirt a pothole and accidentally brushed the girl in the Meena Ka Baas area.

6) A Hindu man from an SC/ST community was abducted and assaulted by five Muslim men in Telangana’s Nizamabad district. The incident took place on September 8, but local police took cognizance of the matter only on September 11.

9) Uttar Pradesh Ballia district District Magistrate IAS officer Aditi Singh has effectively banned Hindu festivals by imposing section 144 for the next two months. As many Hindu festivals like Navratri, Bhai Dhooj and Diwali are approaching in these two months, the move has been widely criticised. On the other hand the Delhi government has shown the way for other state governments by enforcing a complete ban on “storage, sale and use of firecrackers”.

10) A case of religious discrimination against a Hindu student named Pawan Sen at the hands of his Muslim teacher Nishat Begum has been reported from the Raisen district of Madhya Pradesh. The teacher at Government New Boys Secondary School, Garatganj allegedly used some Muslim boys from outside the school to beat up the victim, an 8th standard student. His ‘crime’ was that even after objections from the teacher, he used to go to school wearing a tilak.

11) A Hindu youth, Harendra Yadav, was abducted and brutally thrashed by a Muslim mob in village Budhirampur of Maharajganj district, Uttar Pradesh. When police came to rescue him, they too were attacked.

12) In a shocking case, a minor girl ended her life after harassment by her teacher, Usman, who had been sending her inappropriate messages on social media.

13) An old Hindu woman who has been running from pillar to post to get justice for her daughter who was murdered 4 years back, is now being threatened with further harm by the accused Salman and his father Sajid Ali. On 19 September 2021, Uma Shukla has approached ADG, UP police to protect her from the killers of her daughter Rachna Shukla.

14) In an unsurprising move the DMK government has included Kanimozhi MP, an atheist and Geeta Jeevan, a Christian MLA in the committee for establishing educational institutions using temple money. Earlier the HRCE minister had announced that schools and colleges will be built on temple lands to get income. It was opposed by Hindus as the government would be running the schools and colleges as secular institutions.

1) Bangladesh’s Supreme Court on Thursday granted conditional bail to Jhumon Das, a Hindu minority victim of militants, in a case lodged against him under the Digital Security Act for an “objectionable” post on social media against a Hefazat-e-Islam leader.