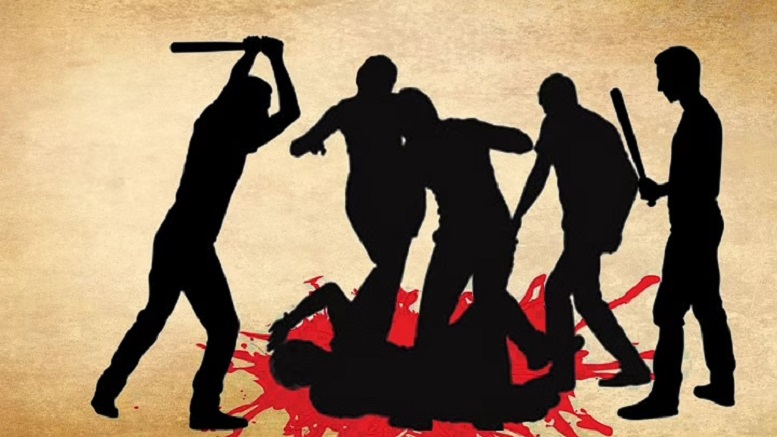 A Hindu youth, Harendra Yadav, was abducted and brutally thrashed by a Muslim mob in village Budhirampur of Maharajganj district, Uttar Pradesh. When police came to rescue him, they too were attacked.

Harendra’s “crime”? He had gone out for a walk along the village canal on Sunday evening when he is said to have met a Muslim girl outside her house and exchanged a few words. Soon, a mob gathered, dragged him to a nearby house and thrashed him so brutally that he suffered multiple fractures and is now recovering in a local medical college.

As per Amar Ujala, Harendra was taken to the house of Usman Ali and also attacked with knives. When his family learnt about this assault, they dialed the UP Police emergency helpline 112. A police team arrived but when they tried to free Harendra from captivity, the mob turned on them too.

To save their lives, one policeman jumped into a pond while another ran into the fields. Later, the Circle Officer arrived with a larger force to rescue Harendra and control the situation.

Based on Harendra Yadav’s complaint, Shyamdeurwa police has registered a case against 32 accused – 7 named and 25 unnamed. Ali Mohammed, the Budhirampur Pradhan’s (village head) husband, is the main accused. He is reportedly a history-sheeter with a criminal background. Other named accused are Sarfaraz, Yusuf, Jamruddin, Aibrar, Sainuddin, Mehdi Hasan.

It is also being said that the accused men had some old feud with Harendra and the issue about him talking to Muslim girl was cooked up to justify their assault.

Sharia Police on the rise

Such Islamic ‘morality police’ or ‘sharia patrol’ is increasingly making life difficult for ordinary citizens across the country.

A few days back in Telangana, a Hindu SC/ST youth was similarly abducted and thrashed by Muslim goons for merely going on his bike with a Muslim female colleague on official work. Another Hindu man dropping off a Muslim woman co-worker home at night in Bengaluru was slapped and abused. In both cases, the Muslim women were clothed in a burqa, the black Islamic garment that Muslim women wear to fully cover themselves from head to toe to ‘protect’ themselves. Even when their family members/husbands told the mob over phone that the Hindu men they were going with are just colleagues, the mob didn’t relent and abused the women and their family members too.

In Afghanistan, the Taliban whip women for being out of their house without a male family member or not being fully veiled. A woman who was wearing a burqa without mesh covering her face was flogged so mercilessly that she lost consciousness.

In the Islamic Republic of Iran too, official morality police such as Gasht-e Ershad (Persian for Guidance Patrols) enforce the Islamic code of conduct in public such as ensuring women observe hijab and avoid cosmetics. So whether Shia or Sunni, such brutal subjugation of women is a common theme in Islamic nations.

Islamists across Bharat, including influential maulanas and politicians, were seen supporting the power grab by Taliban in Afghanistan. Arshad Madani, head of the powerful Deoband Islamic seminary, heralded the Taliban as ‘freedom fighters’, akin to Gandhi and Nehru.

Liberals will claim that such incidents are a backlash against the growing discussion on Grooming Jihad, aka ‘Love Jihad’, wherein Muslim youth groom non-Muslim girls for sexual exploitation and/or forced conversion and marriage. A Bishop in Kerala has recently spoken up on the issue, and a few states have passed laws to counter this heinous crime.

Skilled as they are in the art of propaganda, Islamists are also trying to create a counter-narrative of ‘reverse Love Jihad’, to kill two birds with one stone: project themselves as victims, and use that bogey to enforce even stricter control on Muslim women.

There has not been a single case, as far as we know, wherein a Muslim woman was duped by a non-Muslim man faking a Muslim identity, who then went on to blackmail her with intimate videos or forced her to convert out of Islam. More often than not, if a Hindu youth and a Muslim girl fall in love with each other, the Hindu youth ends up dead: Ankit Saxena, Mahesh Kolli, Dharmendra Chouhan, K Lakshmipathi, Rahul Rajput are some such recent victims.

Liberals warn about ‘Hindu Taliban’, but the truth is that the real danger is from the Talibanization of the Indian Muslim. And that increasing radicalization is not due to some imaginary persecution at the hands of Hindus, but due to a desire to dominate (‘we will rule again’) – a recurring theme as history teaches us – coupled with the lure of the global ummah.