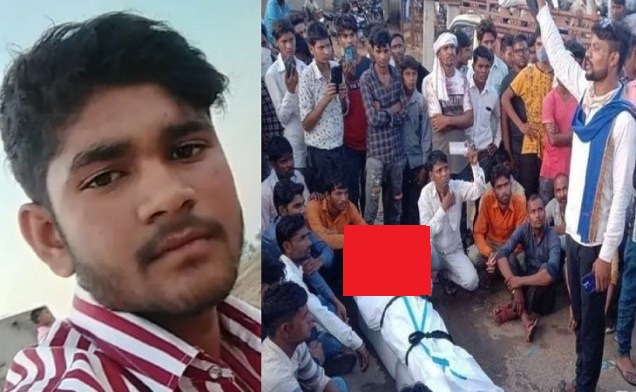 17-year-old Yogesh Jatav finally succumbed to his injuries after fighting for his life for three days. On September 15, the Hindu SC youth from Alwar was lynched by a Muslim mob. They accused him of hitting a Muslim girl while riding his bike. However, as detailed reports reveal, he was only trying to skirt a pothole and accidentally brushed the girl in the Meena Ka Baas area.

Instantly, an enraged mob gathered and pounced on the minor; they attacked him with sticks and iron rods. Bleeding profusely, Yogesh was rushed to a private hospital and then moved to Jaipur-based SMS hospital. However, he had gone into a coma on the day of the attack and passed away on September 18. His body was handed over to his family for the last rites the next day after the post mortem.

The day after the brutal attack, Yogesh’s family had filed a complaint with the local police. In his complaint, Yogesh’s father mentioned the names of the accused – Rashid, Sajeet Pathan, Mubina and four others. He mentioned how blood started oozing out of his son’s ear due to the blows he received.

The bereaved family members staged a protest with Yogesh’s body and blocked the Alwar-Bharatpur road. They refused to cremate the body until the accused were arrested. Soon, a mass of aggravated villagers joined the protest.

Administration officials arrived at the protest site to address their concerns. Finally, the villagers agreed to cremate Yogesh’s body but warned police to act strongly against those responsible for murdering the minor. They also demanded a sum of Rs. 50 lakhs as financial support for the mourning family that has lost their son.

Netizens compared the silence of left-liberals on Yogesh Jatav’s lynching with their massive outrage over the death of a professional thief Tabrez Ansari in a Jharkhand police lock-up after being caught red-handed and beaten by villagers.

Equally strikingly, the same Alwar was seared into national consciousness by the national media after a cow smuggler Pehlu Khan died when he was stopped and beaten by angry villagers in 2017. But Yogesh Jatav’s murder has been buried in the inside pages; there are no lines of reporters waiting to interview his family.

Addressing a press conference in Rajsamand, BJP state chief Satish Poonia said “Rajasthan once again has been ashamed. The brutal way in which 17 year old Yogesh Jatav has been mobbed to death proves the breakdown of law and order in the state.”

“In 2019, a similar incident was reported when Harish Jatav was lynched after his vehicle hit a woman. Krishna Valmiki from Jhalawad also faced a similar fate,” said Poonia.

28-year-old Harish Jatav, father to four daughters and son to a blind man, was also lynched by a Muslim mob in Alwar in 2019 after he accidentally hit a Muslim woman while driving his bike. Just a month after Harish’s death his father committed suicide, heart-broken and aggrieved over police inaction against the people who lynched his son.

In July this year, Jhalawar resident Krishna Valimiki, another Hindu SC youth, was beaten to death by Muslim goons. It was alleged that Rajasthan police authorities tried to protect the accused by not booking them under the SC-ST Act. Instead, they rained lathis on the workers of BJP Yuva Morcha (BJYM), who reached Jaipur to submit a memorandum to the Collector protesting the brutal murder.

Congress spokesperson Randeep Surjewala brushed off Yogesh’s death as only an entitled and protected secular leader can, saying “…crimes can happen in any state, crime prevention is our duty we will continue to do so… “

The National Commission for Protection of Child Rights has sent a notice to the Alwar Superintendent of Police demanding a detailed report on police action in the case.