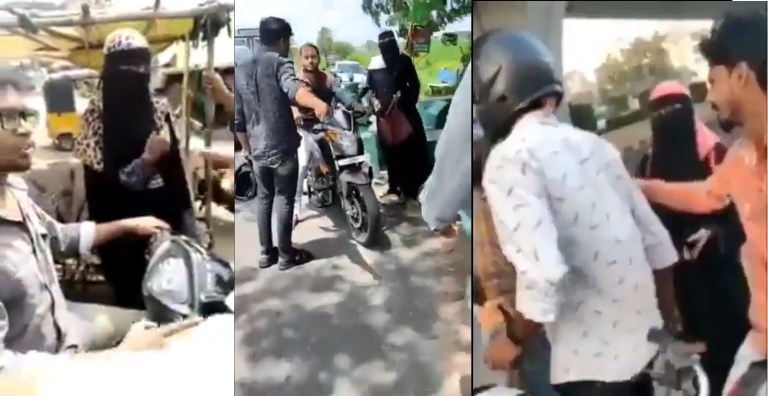 A Hindu man from an SC/ST community was abducted and assaulted by five Muslim men in Telangana’s Nizamabad district. The incident took place on September 8, but local police took cognizance of the matter only on September 11.

The victim was cornered and assaulted by the Muslim men because he was accompanied by a Muslim woman in a burqa on his two-wheeler. The Muslim woman in question is his colleague. Both are employees of IIIT Basara, also known as RGUKT, an autonomous state university offering IT & engineering courses. They were headed for the Nizamabad Government Hospital to procure some documents that they needed to submit for their salaries.

It was during this journey that a car with a group of at least 5 Muslim men inside chased and halted them. A disturbing video of the incident has surfaced. It shows the men aggressively questioning the duo, repeatedly accusing the woman with “quam ka naam badnam karti ho…sharam nahin aati? Musalmanon ka naam badnam kar diya” (you are shaming the community…don’t you have shame? You have shamed all Muslim). The woman pleads with them, even offers to call her parents to explain her job, but to no avail. The shouting soon turns to abuses directed at the Hindu man and then they start hitting him.

The perpetrators then abducted the man and took him to another spot where he was held for several hours. Eventually, the Muslim woman’s brother showed up at the location where the Hindu man was kept as a hostage. He confirmed that it was with his consent that his sister was travelling with her colleague on official work. It was then that the Hindu man was released after a harrowing ordeal.

As per reports, all 5 accused are residents of Bhainsa town. Readers might remember that Bhainsa is a seething communal cauldron where Islamists of the Razakar AIMIM party run amok. The town has witnessed at least two major flare-ups since last year.

Police has booked all the attackers under section 295A and 365 (kidnapping) of the Indian Penal Code, and four of them have been arrested. They have also been charged with the SC/ST Act. Police is investigating further and suspects more people could be involved.

There has been pin-drop silence around this incident among self-appointed Dalit activists and politicians who seek votes through Dalit-identity politics. The absolute indifference from the “Jai-Bhim-Jai-Meem” camp was pointed out by netizens. The left-liberal cabal, which claims to be the gatekeeper of the nation’s conscience, is also quiet.

It is safe to infer that the lack of “wokeness” in this case is due to the religious identity of the 5 assaulters. In multiple cases in the past also, we have witnessed these seasonal Dalit-activist and human rights groups staying unmoved over attacks on SC/STs by Muslim goons, and there is no dearth of such cases.

Multiple videos of such ‘sharia police‘ have emerged from Hyderabad and surrounding areas and the modus operandi is consistent, indicating that such gangs are operating in a planned manner. These gangs stop anyone where they suspect a Hindu youth is travelling or moving with a Muslim woman. The two are then questioned in a threatening manner, and the girl is forced to call her parents who are then lectured to not allow their daughters to move with non-Muslim men.