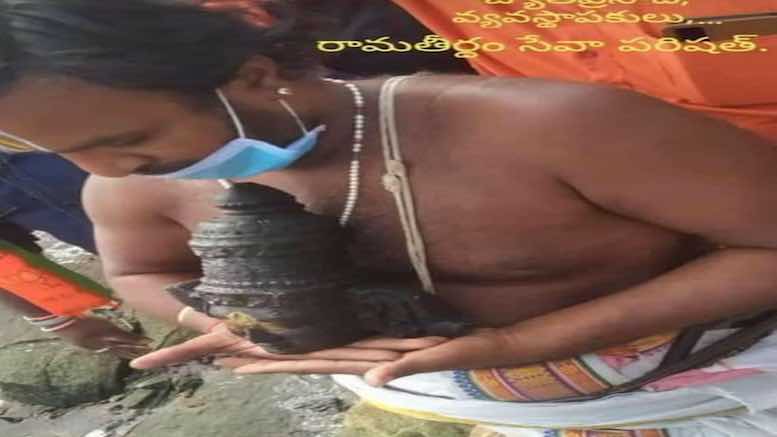 Incidents of temple desecration are just not stopping in Andhra Pradesh. On Tuesday, villagers found that the 400-years-old Kodanda Rama temple near Ramateertham village of Nellimarla Mandal in Vizianagaram district had been vandalised.

The murti of Sri Rama in the temple at Bodi Konda (a hill) nearby the village had been decapitated. The head of the murti was nowhere to be found and locals suspected it had been dumped somewhere in the forest. The deity’s head was found the next day.

Ramateertham village is visited by a large number of devotees who come to offer pooja at the Kodanda Rama temple and a Sitarama Swamy temple that is located in the village too.

Representatives of various political parties, the local MLA and others have come to the village. Srinivasananda Swamy, Chairman of Ramateertham Parirakshana Parishad, said that, “this is an insulting incident and the emotions of the devotees are hurt. The government should rapidly act on this issue and create confidence among the public and provide protection to all the temples in the state”.

This is the state of temples and murtis in Andhra Pradesh. This is the murti of Sri Rama that was destroyed yesterday at Ramatheertam. They found the head today.
My heart breaks seeing this. Doesn't yours @narendramodi @AmitShah
Save AP. pic.twitter.com/Zi8EjOUEsM

Many such incidents have occurred this year in AP, amidst reports of tacit state backing for Christian conversion on a mass scale ever since the Jagan Reddy, a Christian, was sworn in as CM in May 2019. Here is a partial list of those incidents which have come to our notice:

Feb 2020: A chariot belonging to Prasanna Venkateswara temple at Kondabitragunta village, Bogol Mandal in Nellore district was completely burnt down at midnight.

March 2020: Two ancient Hindu temples in Suryaraopeta, Kakinada Rural Mandal of East Godavari District were demolished allegedly by a Church Pastor using a JCB machine who then took away the antique murtis of the Goddess.

Sept 2020:  Three lion statues that adorn the silver-plated chariot of the historic Kanaka Durga temple in Vijayawada were found missing.

Sept 2020: A murti of Sri Ganesh was desecrated by allegedly applying human excreta to the sacred murti in Rajahmundry.

Oct 2020: A temple dedicated to Sri Hanuman was attacked and the murti destroyed in Lachipalem village situated in the East Godavari District.

The spate of attacks has left Hindus across the state shocked, with even ‘secular’ leaders like Jana Sena Chief and Telugu film actor Pawan Kalyan demanding safety and security of Hindu temples and saying that “lame excuses such as ‘it was an act conducted by mentally unstable persons’ or ‘honey hunters set fire to the chariot accidentally’ are not acceptable anymore”.

But the Jagan government seems to be shrugging off all Hindu pleas with brazen nonchalance. AP Civil Supplies minister Kodali Sri Venkateswara Rao, popularly known as Kodali Nani, rubbed salt on the wounds of Hindus by saying, “There’s no loss for Hanuman if his Idol’s hand was broken. After all, it’s just an idol. There’s no loss for Goddess Durga if silver lions weighing 10 kgs were stolen. After all, it’s six lakh rupees. Nothing happens to God in Antarvedi if the holy chariot is destroyed due to a fire mishap. The government will compensate for the same.”

Jagan Reddy is a devout Christian who is said to read the Bible every day. His great grandparents had embraced Christianity, and the promotion of Christianity as a state policy was something critics claim was started by his late father YSR who became CM of undivided Andhra in 2004 with blessings of Sonia Gandhi.

However, YSRCP loyalists claim Jagan ‘respects’ Hindu Dharma and follows ‘mixed faiths’. Jagan’s mother Y S Vijayamma, wife Bharathi and sister Sharmila are all devout Christians who do not even accompany Jagan on his photo-op visits to temples. Sharmila is married to P Anil Kumar, a Hindu who converted to Christianity post-marriage and is now a popular evangelist.

Jagan even appointed his maternal uncle YV Subba Reddy as Chairman of the Tirumala Tirupati Devasthanams (TTD) board which controls the iconic Tirupati temple. There were strong protests that Subba Reddy was a devout Christian like his nephew Jagan. Subba Reddy has denied this.

Overt and covert Government incentives to Christians

Multiple reports have come in regarding serious fraud and diversion of government schemes intended for poor Hindus in AP. Christian converts are holding on to CS/OBC caste certificates to avail dual benefits. This has been happening for many years now, but has seemingly accelerated under Jagan and is being unearthed now due to work of legal rights organisations like LRPF.

Last  August, the government had issued an order to provide for an honorarium of ₹5,000 per month for pastors.  The government is also taking steps to fulfil other manifesto promises for the Christian community — plots and house construction for pastors, financial assistance of ₹1 lakh for wedding of Christian girls, among others.

Jagan has also hiked by 50% the subsidy provided to Christians as part of a scheme introduced by the Congress government in undivided Andhra Pradesh in 2013 for pilgrimage to Jerusalem and other Biblical sites. There is no such subsidy in AP for Hindu pilgrimages.

As per the 2011 Census, Christians constitute only 1.4% of the total population, but there are many crypto-Christians who hide their true identity from census enumerators in order to retain their SC/caste reservation benefits. YSCRP MP Raghu Ramakrishna Raju has accepted that in reality Christians are 25% of total population in Telugu-speaking states (AP and Telangana) as Christian missionaries are indulging in large-scale conversions using foreign money power.