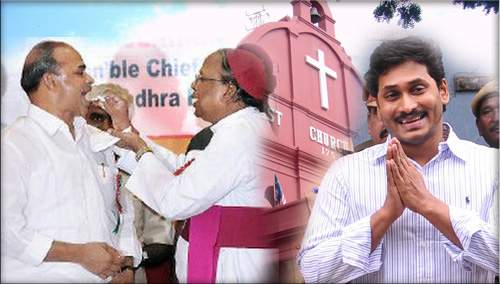 In a video, Saripella Rajesh, Christian Mahasena leader, is seen offering one lakh rupees to anyone who marries an upper caste Hindu girl – needless to say, after converting the girl to Christianity. He not just encourages Christian boys to lure Hindu girls, but also assures them of providing protection and physically assaulting those who might ‘come in the way’ of those boys.

The southern states in general and undivided Andhra Pradesh in particular have seen a meteorical rise in conversions. Here’s what Padma Shri awardee TV Mohandas Pai had to say about the conversion situation-

“Andhra Pradesh, particularly the interiors, Hyderabad and the coastal regions, has been specifically targeted due to the red carpet laid by a now deceased Chief Minister whose son-in-law is a Pastor with his own outfit. The visible impact across this region to any observer shows clearly that a huge amount of money has come in and that there is targeted conversion going on. Some evangelical groups have claimed that 9-12% of undivided AP has been converted, and have sought special benefits from the State (which has been reported in the media)”

The deceased Chief Minister referred to in the above article is none other than YSR Reddy. His son-in-law Anil Kumar, a Hindu Brahmin by birth, converted to Christianity after marrying YSR’s daughter and Jagan Reddy’s sister Sharmila Reddy in 1995. He has been into evangelism since 1998 and runs Anil World Evangelism.

YSR led the Congress party to victory in Andhra Pradesh in 2004 and his tenure as Chief Minister saw a meteoric rise in the evangelisation of Andhra Pradesh. Rural areas in particular saw a huge increase in conversion to Christianity. Hindu pilgrimage places were targeted aggressively by missionaries and the Church which received tremendous support from YSR. Government support encouraged the missionaries to pursue their conversion activities with renewed vigour and they began rampant construction of churches across the state. While Hindu temples were neglected and looted, the Church and missionaries had a free hand to ‘harvest souls’.

While YSR also conducted homa at home and visited Hindu temples, may be to gain the trust of Hindus and hoodwink them into voting for him, he ensured his government’s covert and overt support to missionaries so that they could pursue their evangelical activities.

Jagan Reddy has also adopted the same modus operandi. To fool Hindus, in the past Jagan Reddy has performed some Hindu rituals. But no matter how hard a wolf tries to hide behind a sheep skin, ultimately the truth would be out. From giving benefits to pastors, to providing funds for construction of new churches and repair of existing churches and other church managed organizations such as old age homes, orphanages etc, he has followed in his father’s footsteps.

Contrast this with how temple wealth is being controlled by the state government right from the Tirumala Tirupati Temple to Kalahasti to Srisailam. While there have been accusations of utilisation of Tirupati Temple funds for non-charitable and non-Hindu purposes, the loot and plunder continues unabated because Hindus are not only passive but not a vote bank either.

YSR and his family has been using religion as a political tool for a long time now. YSR was a Congress man, a party that is known for minority appeasement, and a close Sonia aide. Jagan Mohan Reddy, a practising Christian, broke away from the parent party & founded YSR Congress Party (YSRCP). His mother, Vijaya Lakshmi who is the chairperson of the party, is known to openly flaunt her religion by holding Bible in full public view during party rallies.

A person’s faith/religion is his/her personal choice but when the top leadership of the party openly supports one religion over others & promote proselytization of that religion, its members are encouraged to peddle their religious agenda and continue their vicious anti-Hindu campaign.

Islamism is an open threat, one that attacks with you with swords and in modern times bombs, but Christian evangelism is a hidden threat, one that adopts the strategy of infiltrating governments and the official system and slowly eating away at the local culture and religion. That is how much of Europe, Africa and Americas lost their native culture and religion. We Bharatiyas have successfully kept out both these threats despite centuries of attacks, but the fight still continues and has actually intensified under the guise of secularism.

As Swami Vivekananda once said “every man who goes out of the Hindu pale is not only a man less, but an enemy more”. The enemies are now sitting in Government in many states and using the system to peddle their agenda.