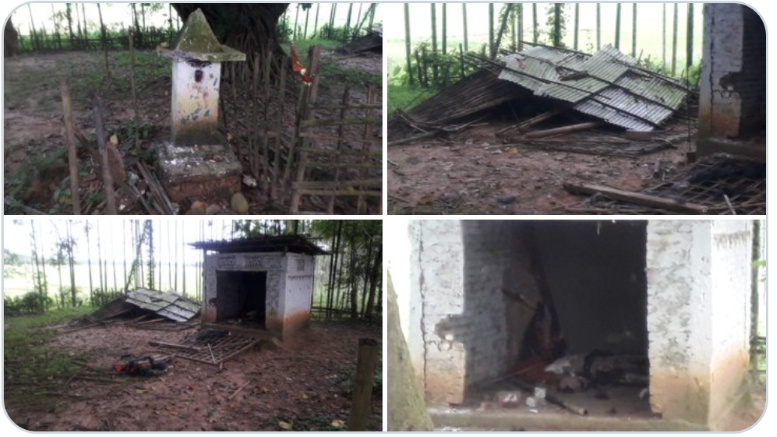 A Kali temple built by Hindus of Merenggapara in West Garo Hills district of Meghalaya has been destroyed, allegedly by Christian extremists.

This incident comes after a similar incident reported last year from Kongthong in East Khasi Hills district where a Niam Khasi sanctum sanctorum was vandalized and desecrated by Church elders and others who interrupted an annual ritual by practitioners of the Khasi tribal religion while police and a local magistrate stood by mutely.

The incident took place on the 19th of August when miscreants destroyed the Marok Ancholic Mahamaya Mandir. While the police have stated that investigations are on-going in this case, LRO has pointed out that the police are simply dragging their feet as they did in the Niam Khasi Kongthong case.

It is important to point out here that despite the fact that LRO has written more than 50 follow-up emails, there have been no arrests in the Niam Khasi case where the sanctum sanctorum was vandalized.

#Meghalaya Police @MeghalayaPolice PR on #Merengapara #Kali temple destruction.
Our Qstn- Despite 50 plus follow up emails why #Kongthong Niam Khasi attack culprits r not arrested? To whom U r threatening on #GaroHills attack with PR?
Sorry to say but ur track record is worst! pic.twitter.com/BB6fJ3FjQ2

In its press release, the Meghalaya police has stated that a police team visited the site as soon as they received information regarding the incident and registered a case under relevant sections of the IPC at Tura Police Station.

The press statement also points out that they have convened a ‘peace committee’ meeting comprising of people from all communities at Merenggapara village attended by villagers from Merenggapara and six other neighboring villages.

Furthermore, the police have stated that villagers have assured to co-operate in their on-going investigations and asked the public to refrain from believing in ‘rumors’ and instead contact them for further clarification.

As per information shared by Newsline Network Bangla on their Facebook page, Mandir President Manoranjan Koch has filed a written complaint to the police demanding a thorough investigation and meting out exemplary punishment to the culprits.

It remains to be seen how seriously the Meghalaya police take this case considering the fact that they are yet to act in the Kongthong case as well.

Just last month, a pastor burnt a murti of tribal Goddess Ain Donyi (Mother of the Sun) in the name of Jesus, calling her ‘power of the enemy.’

This is not the first instance when evangelical missionaries, radical Christians or Islamists have attacked Hindu temples across the country. Several desecration incidents or attacks on Hindu religious leaders have been reported from North East. There have been reports of Hindu temples being ransacked in Manipur’s Senapati district where the Christians form the majority (89%) while the Hindu population is merely 9%. In 2000, terrorists belonging to the Christian extremist terror outfit National Liberation Front of Tripura (NLFT) broke into a temple and shot dead a popular tribal Hindu preacher known as Shanti Kali.

In May 2016, a Christian employee of Hindustan Photo Films had damaged eight vigrahas of Hindu deities in Tamil Nadu’s (TN) Udagamandalam (Ooty). Even in January, this year reports had emerged of vigrahas of Hindu Devis and Devatas having been desecrated in East Godavari district of Andhra Pradesh. It is worth mentioning that evangelical activities have received a boost under Jagan Mohan Reddy’s regime just like they had when his father YSR Reddy was the Chief Minister.

Fundamentalist adherents of Abrahamic faiths like Christianity and Islam have time and again indulged in vandalizing and desecrating murtis of Hindu Devis and Devatas. Extremists of both faiths consider Hindus as “devil worshippers” who need to be ‘rescued’ from sin and hellfire by bringing them to the path of the “one true God”.

While both religions are aggressive in their proselytization, evangelical Christian missionaries are able to buy favorable media coverage and collusion with the huge donations they receive from abroad.

The harsh reality is that peace prevails when Hindus are in majority whereas when Abrahamic population supersedes that of Hindus, violence and attacks on Hindus become the norm.