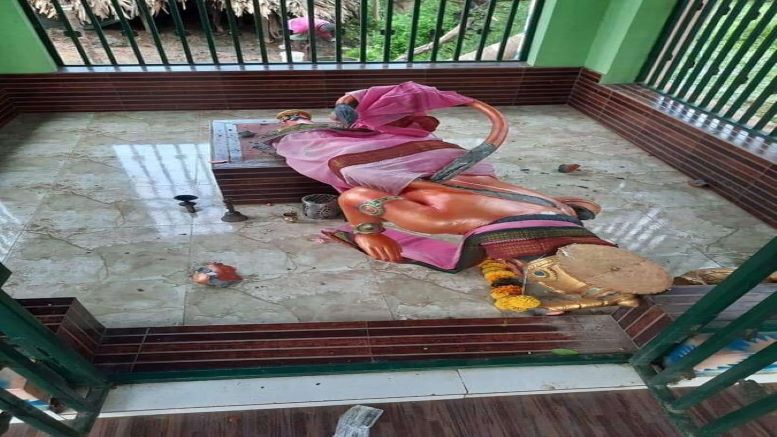 The brazen assault on Hindu temples and culture in Andhra Pradesh (AP) is continuing unabashedly with news emerging of yet another temple being attacked and murti desecrated this time in East Godavari district. As per news reports, a temple dedicated to Bhagwan Hanuman was attacked and the vigraha was destroyed by unidentified miscreants in Lachipalem village situated in the East Godavari District.

BJP State Secretary Rameshnaidu Nagothu tweeted about the incident and questioned “how long must Hindus tolerate such incidents”?

The locals were angered by this incident and reported the matter to the police demanding action against the criminals. Several Hindu organizations also echoed the demands of the villagers stating that attacks on Hindu Dharma and temples have increased in recent times.

Like in some of the earlier cases, the CCTV cameras at the Lachipalem junction were conveniently malfunctioning which further irked the locals who believe this could be an attempt by the police to save the miscreants. One of the locals asked for a judicial inquiry considering the fact that Hindus are constantly under attack in the state.

Readers may recall that several such incidents have been reported from Andhra Pradesh towards which Hindupost has been constantly drawing the attention of the readers. Be it the desecration of the vigraha of Bhagwan Ganesh in Rajahmundry or numerous murtis being destroyed in Pithapuram or the chariot of Shri Lakshmi Narasimha Swamy Temple catching fire, the incidents are too frequent to be ignored.

Further, it must also be noted how the majority of the incidents are taking place in East Godavari district which cannot be a mere coincidence and calls for a thorough probe. It is high time the state government set up an impartial judicial inquiry into these incidents so as to address the genuine concerns of the Hindu populace.