Frequent attack on temples in Andhra causes concern among devotees 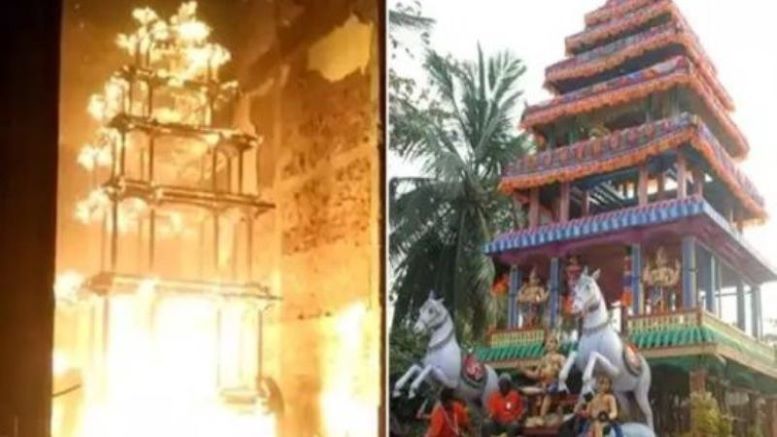 Temples in Andhra are time and again being attacked and vandalized. In what can only be termed as suspicious, the chariot of Sri Lakshmi Narasimha Swamy Temple in East Godavari District’s Antharvedi village was found afire despite the fact that there is no possibility of self-combustion either due to short circuit or lamps being lit in the room where the chariot is kept.

Following the incident, this is one in a series of many attacks on Hindu temples this year, devotees gathered to protest against the incident and demand action from the government. Beginning from February this year when the chariot of the famous Prasanna Venkateswara Temple in Nellore district was completely burnt down at midnight, the frequent damage to Hindu temples has caused concerns among the devotees who suspect foul play.

Immediately after receiving the information temple in-charge, Shri Arjun Rao contacted the Superintendent of Police over the phone to discuss the incident. A police complaint has been registered and investigations in the case are underway.

LRPF (Legal Rights Protection Forum) has taken cognizance of the series of incidents and written to the governor of Andhra Pradesh (AP) to seek a thorough investigation into the matter as well as order the Andhra police to make sufficient arrangements for the safety and protection of Hindu temples.

In their letter, LRPF has pointed out that they had earlier written to the AP HM Smt. Mekathoti Sucharita asking her to provide protection to Hindu temples. However, their plea seems to have gone unheard, and hence they are reiterating their request to the governor.

They have cited a few incidents to make their point that has been listed below:

The letter cites a possible criminal conspiracy in view of the similarity in the pattern of attacks. Furthermore, considering the anguish among Hindu devotees, LRPF has said that inaction may lead to communal strife. Therefore, besides a thorough investigation, the letter also seeks ample protection for Hindu temples to protect the religious sentiments of Hindus in the state.