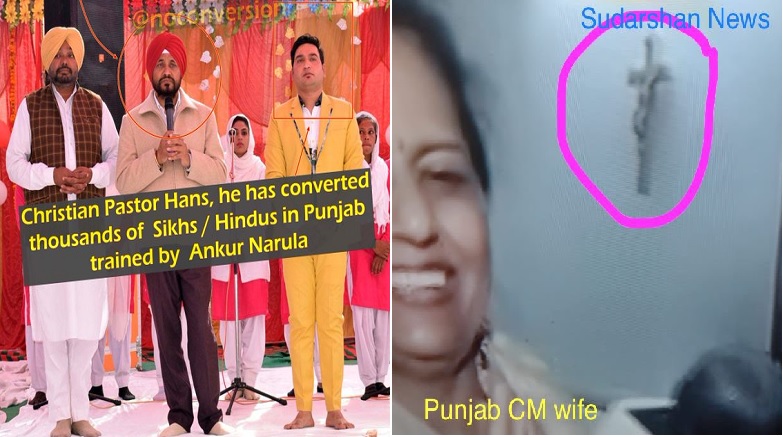 Charanjit Singh Channi has been appointed the new CM of Punjab replacing Captain Amarinder Singh. He is reportedly a Dalit Sikh, but new information has emerged which raises a question mark over his real religious identity.

While interviewing Channi’s wife after his appointment as CM, Sudarshan News TV channel observed a Christian cross with a crucified Jesus hanging on the wall.

Punjab has been facing rampant Christian missionary activity for at least two decades now. Officially, Christians are a mere 1.26% of the total population – Sikhs at 57.7% and Hindus at 38.5% form the two largest demographies in this border state.

But the true figure is much higher. Back in 2016, a Pentecostal Christian leader had claimed that Christians are 7-10% of the total population. We have covered how the conversion industry is flourishing in Punjab with proselytizers like “Apostle” Ankur Narula, Gursharan Kaur, rape-accused Bajinder Singh etc. using fake miracle cures, deception, illegal foreign funds and the good old-fashioned ‘rice bag’ (including illegally diverted government rations) to lure converts from among the poor & underprivileged sections of Sikhs and Hindus.

Controversial Christian activist John Dayal, who rose to prominence under Sonia Gandhi’s UPA regime, explains the concept of ‘Crypto Christians’ in Bharat who he says “live a unique double life, Hindus in the public domain, and on official records, while privately professing faithfulness to Jesus Christ.” In a 2014 article written for a German Federal Government site, Dayal had written –

These are communities, specially in the states of Andhra Pradesh, Maharashtra, Punjab and Tamil Nadu, who avoid registering themselves officially as such in order to continue taking advantage of government’s affirmative action programmes that include reservations in academic institutions, the civil service, and legislatures.

An image has also surfaced which shows Punjab’s new CM Charanjit Singh Channi at an event by one Pastor Hans, who was reportedly trained by evangelist Ankur Narula

Incidentally, Channi was also accused of sending indecent messages to a senior woman IAS officer in 2018, with the matter being ‘resolved’ with intervention of Amarinder Singh. In 2016, Channi had tweeted that he was ‘privileged’ to drive Rahul Gandhi’s vehicle during the latter’s trip to Punjab.

Sonia Gandhi’s appointment of Y. S. Rajasekhara Reddy unleashed a wave of bigoted, poisonous Christian evangelism in undivided Andhra Pradesh, and that work is now being carried forward by YSR’s son Jagan Reddy. It is also pertinent that Punjab’s number one proselytiser Ankur Narula started in 2008, during UPA-1, with 3 followers and has witnessed explosive growth since.

Now, if Channi is truly a crypto-Christian as evidence suggests, Punjab could be in for another spurt of unbridled evangelism with dangerous consequences for the nation as a whole.