Census does not tell real population of Christians in Punjab: Pentecostal Leaders 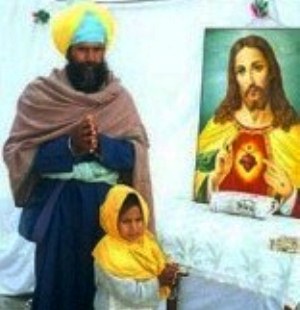 Christian population in Punjab is 7-10% and Christianity is a ‘fast emerging religion’ in the state, say Pentecostal Church leaders. Pentecostals are a radical sect within Protestant Christianity that emerged in the late 19th/early 20th century in South USA. They believe in the inerrancy of the Biblical scripture and in ‘spiritual gifts’ such as ‘speaking in tongues’ (the ability to speak a previously unknown human or divine language) and ‘divine healing’.

Pentecostals are extremist evangelical Christians – an evangelical is a Christian dedicated to promoting the ‘good news’ about Christianity i.e proselytizing by informing non-Christians that they are destined to burn in eternal hell-fire unless they accept Jesus Christ as their savior .

“Bishops and pastors of Pentecostal and para church organisations of Punjab said here on Saturday that the census, which is conducted by the government after a decade, did not tell the actual number of the Christians residing in Punjab.

While interacting with mediapersons on the sidelines of the state-level assembly of the Christian leaders, organised at Virsa Vihar here, a Christian leader Imanul Rehmat Masih said, “In reality, our population is 7 to 10% in the state, but the latest census shows us less than 1% under a deep-rooted conspiracy against the fast emerging religion.”

“Despite our sizeable population in Punjab, no political party has given us representation in the state legislative assembly, Parliament and executive since the country got Independence, which is injustice with us,” he said. He further alleged that the successive governments had never addressed demands of our community, nor given them the rights they deserved for.

“Even, we are being deprived of the reservation under backward classes. When, any member of the Christian community applies for a reservation certificate, he is asked to produce conversion certificate which is impossible generally,” he added.

He also criticised the state government for not allotting him a ground for performing last rites of the dead as per Christian tenets. When asked about their support to any political party in the upcoming assembly elections of 2017, the leaders said they would support a party that accepts their conditions.

Commenting on the alleged obstacles being created by the Rashtriya Swayamsewak Sangh (RSS) in the propagation of their religion, they said the constitution has given right to every citizen of the country to adopt any religion, according to his will and no direct and indirect restriction can be imposed on anyone.

They also formed a state-level united front of the bishops and pastors to fight for their rights. Masih was elected the front’s chairman, while Ulfat Raj was appointed president.”

While the Census of Bharat is generally considered reliable, there have been question marks raised over the census exercise from time to time. As this OpIndia article states, in absence of “pointed questions” in the census, there is a definite risk of Hindu population being overestimated and inflated in official records. An excerpt from the article says –

“Please note that SCs are to be counted only as Hindus. Since the neo-converts to Christianity or Islam don’t want to lose the reservation benefits, they are often asked by evangelists to wrongly claim their religion as Hinduism so that they get the benefits of reservation.

The scale of conversions in North East and in many areas of Andhra Pradesh has been gigantic. It is estimated that nearly 30 per cent of Coastal Andhra is now Christian, while some states in North East are entirely Christian.

It should be noted that the converts in North East list themselves as Christians in census because STs can belong to any religion (see picture) and continue to get reservations, but the SC converts, mostly in the rest of India, wrongly list themselves as Hindus, thus over representing the actual strength of Hindus in India.

This is the reason many Christian organizations have been demanding reservations for “Dalit Christians”. Once this is allowed, the neo-converts would come out of this pretense and make themselves counted as non-Hindus.”

This analysis of the Census 2011 data for the state of Andhra Pradesh by respected demographer Dr. JK Bajaj further educates us about this issue –

A noted ‘Breaking India’ intellectual and Christian activist like John Dayal, who rose to prominence under Sonia Gandhi’s UPA regime, explains the concept of ‘Crypto Christians’ in Bharat who he says “live a unique double life, Hindus in the public domain, and on official records, while privately professing faithfulness to Jesus Christ.” Dayal adds in this 2014 article on a German Federal Government site –

“The official Census is not the best guide to the number of Christians in India. No one believed the official figures (of Census 2001) that Christians constituted just 2.3 percent of the population. The Catholic Church, Protestant groups and particularly the Pentecostal churches collectively claim a total figure that may be two or three times the official Census numbers…. others estimate it as high as 9 percent.”

And Dayal echoes the OpIndia piece and Dr. Bajaj in providing the reason for this discrepancy between Census and real figures regarding the Christian population –

“Social scientists and researchers say there are a number of reasons why this may in fact be true. The enumerators’ questions in the Census operations discouraged members of the former untouchable castes, who call themselves Dalits and are called Scheduled Castes by the government, from registering themselves as Christians. These are communities, specially in the states of Andhra Pradesh, Maharashtra, Punjab and Tamil Nadu, who avoid registering themselves officially as such in order to continue taking advantage of government’s affirmative action programmes that include reservations in academic institutions, the civil service, and legislatures. Official conversion to Christianity would make them ineligible under Article 341 (iii) of the Constitution, which holds such affirmative action only for Hindus, Sikhs and Buddhists. This law has been challenged twice in the Supreme Court, which upheld it the first time, but five years ago reopened hearings on a public interest litigation by Dalit Christians.”

But the same Dayal executes a neat U-turn a year later, when he uses the Census 2011 figures (which claims the share of Christians has actually reduced from 2.35% in 2001 to 2.3% in 2011!) to dismiss Hindu opposition to conversion by Christian missionaries as ‘Hindu fanatic’ ranting! Of course, this statement came while addressing a Bharatiya audience in a Christian propaganda site.

The Pentecostal leaders of Punjab like Imanual Masih are most likely spot on when they say the Christian population in Punjab is 7 -10%. Hindus and followers of other Dharmic faiths like Sikhs, Jains, Buddhists in Bharat are facing a grim battle for survival against a well-entrenched, globally networked, extremely well financed (through FCRA route) missionary industrial complex, which has powerful backers in Bharat’s polity in the shape of Sonia’s Congress, Leftists and other ‘secular’ parties, media (including entertainment media) and academia.

We must use every legal means at our disposal to fight this battle to uphold Dharma and end this religious-cultural genocide which will end up killing the unique diversity of our nation.