Christian conversion in Punjab : the conversion empire of Ankur Narula and its funding In the Jalandhar district of Punjab, there is a small village called Khambra. A non-government organisation named Spiritual Welfare Society is headquartered in Khambra. The NGO is headed by one Varsha Rani and other important functionaries include Balvir Kaur and Piara.

If you peruse the FCRA returns, you will find that a majority of the donors are Punjabis, some with Christian names and others with typical Punjabi names. In 2017-18, there were 253 such donors who donated above Rs. 20000. In 2018-19, the number increased to 506 i.e. exactly the double. There is nothing strange in overseas Punjabis funding an NGO in Jalandhar. In fact, most Punjabis consider sewa as the essence of religion. Surely, it must be doing some great work!

Search the name of the NGO on Google and you will not find much about the society. For an NGO receiving crores in foreign donation and probably much more in local donations, it has negligible footprint on the internet. There is a single Youtube video showing that it distributed 50 sewing machines and some rations to poor women. The video tells that it did the same in association with Khambra Church and Rashtriya Masihi Sangh. Nothing else is known about the activities of the NGO.

Ankur Narula’s church : where the money of this NGO is used

The end purpose of money received through donation, as mentioned in the FCRA form is educational, social and religious. The return form for 2017-18 shows that the NGO created assets worth approximately  Rs. 1.4 crores. The return form for 2018-19 shows that Rs. 1.67 crores of foreign money was utilized for educational purposes, about Rs. 53 lakhs for religious purposes and rest Rs. 62 lakhs for social purposes. This much amount of money spent should show results somewhere.

We might be able to solve this mystery if we dig a bit about its key functionaries, i.e. Varsha Rani, Balvir Kaur and Piara. A simple google search of this name with Ankur Narula will show that all three are Pastors in his church and actively promote conversion to Christianity. Varsha Rani is the vice president of Ankur Narula Ministry society. Balvir Kaur, who calls herself a “Prophetess”, runs Roshni Ki Kiran Ministry, another front for Ankur Narula, and is routinely featured in Masih Parivar Channel on YouTube. In the description of this video, shown below, you can see how both are connected. 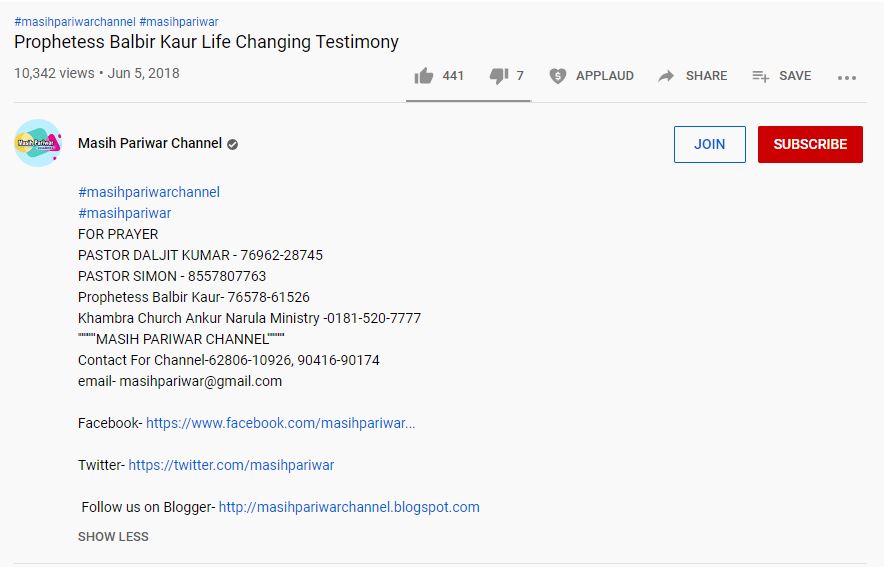 Piara or Pastor Piara Lal, as he is now known, runs Gospel for Nations, Dialpur. That is another front for Ankur Narula. You can see the description of this video, that he is an associate of Ankur Narula just like others mentioned in the list. Basically, Ankur Narula runs a web of organisations, all of which have the same goal of converting Hindus and Sikhs of Punjab to Christianity. The money being used in these activities can be openly seen in their programmes.

On the other hand, Ankur Narula claimed on his social media that he had bought many properties in the year 2018. He bought a college building and also opened The Christ Bible College. Clearly, a lot of money was spent here. If the account of Spiritual Welfare Society are audited, probably we shall know the whole truth.

At this stage, a simple question arises. How does an organisation, which has practically no footprint on the internet, manage to attract crores of rupees from foreign countries? Now this donation is not by a single organisation, but by hundreds of people, who must have known about the activities of the organisation before donating.

Please remember that the NGO named Spiritual Welfare Society does not even have a simple blog or website to solicit donations. Clearly, the donations are being solicited elsewhere. If not, hundreds of people do not magically know the correct account details of the organisation.

Here comes the role of media arms of the Ankur Narula organisation. Ankur Narula and his lackeys, publicize their activities through various social media channels. To take an example, the YouTube Channel by the name of Ankur Narula Ministries has more than 4 lakh subscribers. It is also known by the name of Anugrah TV. He actively seeks donations on the channel and the website of the channel. It must be noted that despite Ankur Narula not formally having any FCRA, he seeks foreign donations or “offerings”, as he calls it! It is clearly against the law. 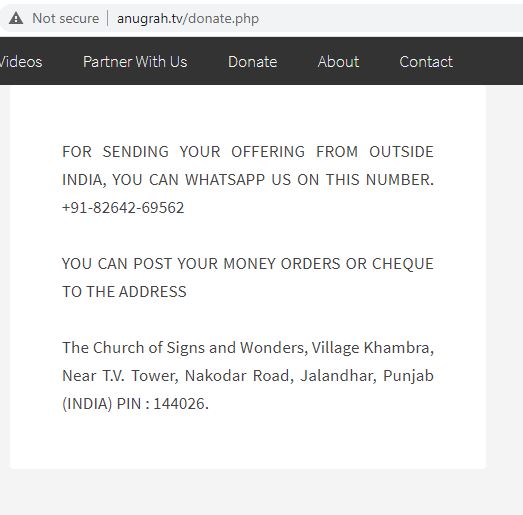 It is for the investigating agencies to check where is he directing the money received from foreign countries. Infact, Spiritual Welfare Society might not be the sole route through which he is receiving money. He might be getting money through various other NGOs and through hawala route too. The information might be communicated to his followers through the given WhatsApp number. Please note that formally, on papers, Ankur Narula has nothing to do with Spiritual Welfare Society, so getting money from even there is illegal for him, specially as his organisation is not registered under FCRA! He cannot solicit any donations from outside Bharat at all.

The impact of this pumping of money in conversion activities can clearly be seen in Punjab. As we wrote in an earlier piece, Punjab is now 10% Christian.  Ankur Narula started with 3 followers in 2008. By 2018, he had 1.2 lakh followers and his followers were growing double every year by his own admission. If we extrapolate the number, by 2020, he would have about 3-4 lakh members. Please note that the entire Christian population of Punjab in 2011 census was reported to be 3,48,230!

In 2016, Christian leader Imanul Rehmat Masih said, “In reality, our population is 7 to 10% in the state, but the latest census shows us less than 1%.” He demanded representation of Christian community in Legislative Assembly and easier methods to get conversion certificate. It is a matter of time before the political parties start another kind of appeasement in Punjab. In many cases, it has already started.

The government has recently amended the FCRA and it might curb to some extent the activities of these NGO, which are fronts for conversion factories. It is likely that the hawala transactions will now increase and unscrupulous elements will find and exploit some loopholes that still remain. It is important that the relevant investigating agencies mount a full investigation into the accounts of such persons so that fear of law can be put in the hearts of these people.

Edit: Twitter user @by2kaafi, who regularly tweets on FCRA related issues, has found more proof of connection between Ankur Narula, Varsha Rani, Spiritual Welfare Society and his conversion activities. In this facebook post, Ankur says that Spiritual Welfare Society is run by his mother. Also note the cheque in photo, it contains signature of Varsha and also name of the NGO. Narula apparently gave this cheque to  father of a gangrape victim girl, who seems to be from a Christian family. Curiously, he proclaims himself to be “MAN OF GOD” in the post.