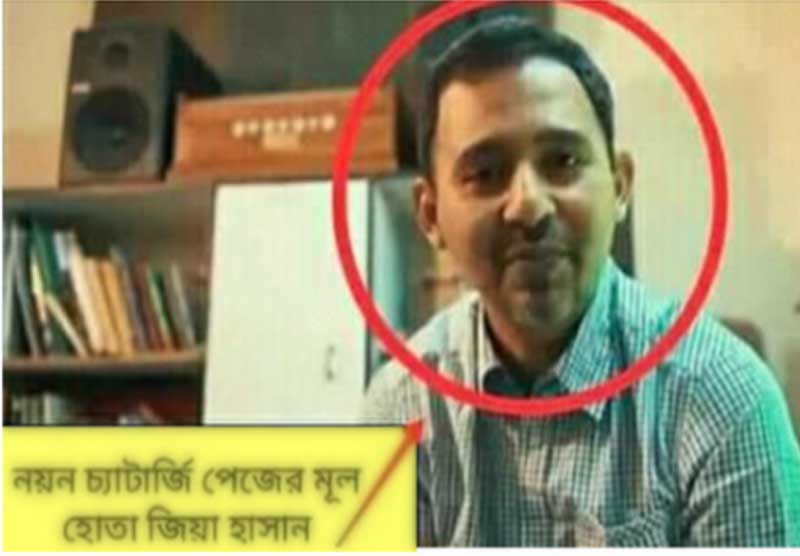 Bangladesh-focused propaganda Facebook page ‘Nayan Chaterjee” has come to light for peddling anti-Hindu sentiments, reports Banglaeshi news outlet BDTimes365.com. Though the authorities initially found it challenging to reach the admin behind this provocative page, it has finally been revealed that a man named Zia Hasan posing as ‘Nayan Chatterjee’ was operating the hate-page by assuming a Hindu Brahmin name.

Zia Hasan has been using the page, “Nayan Chatterjee” to provoke the Muslims of Bangladesh against the Hindus who form a vulnerable minority in the Islamic country. Hasan started working on his conspiracy against the Hindus by spreading unfounded rumors about them. This turned the already agitated Bangladeshi Muslims more hostile against the Hindus. The objective was to prevent the Hindus from establishing themselves and getting any benefits in Bangladesh, especially government jobs. Stating that he currently resides in Bharat, Hasan claimed to be in contact with senior officials in Bangladesh’s State Intelligence agencies, and the armed forces.

Zia Hasan is part of the cyber department of the Ansarullah Bangla Team, an affiliate of the Islamic terrorist group Jamaat-ul-Mujahideen Bangladesh. His aspirations are not limited to running a vile Facebook page; he nurtures a greater extreme ambition of separating West Bengal from Bharat, merging it with Bangladesh and forming a huge Islamic state. Hasan is not alone in this; he is working with communist groups operating within Jadavpur University, Kolkata, Bharat. He has created several fake ids posing as a pro-Hindutva individual to collect information from various Hindu organizations.

Nayan Chatterjee alias Zia Hasan is presently living in Bharat to give shape to his plans of separating West Bengal from Bharat and merge it into Bangladesh. He has chalked out a long-term plan to work against the Hindus, and his association with the terror group Ansarullah Bangla Team, an organization with over a thousand individuals working towards forming Greater Bangladesh, advances his nefarious aspirations.

Language chauvinism i.e. repeated stress on the Bangla language is the first step to realize the plan of merging West Bengal with Bangladesh. In Bharat, Zia Hasan is also deriving assistance from Bengali organizations that are adamant on linguistic identity. Together with the secessionist organizations that hide their ulterior motives behind the promotion of the Bengali language and Bangla-speakers in West Bengal, they have started a language-based movement. The idea here is to segregate the Bengalis from other Bharatiyas and sow the idea of a “separate Bangla” in their minds.

On face value, it appears like a project for the dignity of the Bengali language. Hence, not many are able to see through the dubious motives of the Muslims who are running the propaganda from behind. It has been revealed that Hasan is getting massive assistance from the “secular” Hindus of the Bharatiya state.

Aware that West Bengal has a significant non-Bengali population that speaks other Bharatiya languages, Zia Hasan, along with his associates in West Bengal are trying to establish a Bengali-dominated ecosystem in the state. Following the principle of divide-and-rule, the strategy here is to create a rift between the Bengalis and the non-Bengalis that includes the Marwaris, Gujaratis, and Hindi-speaking population in West Bengal. The next step will be to side with the Bengalis, to convince them to demand a ‘free’ state which will eventually merge with Bangladesh.

It is apparent that the organization Zia Hasan is working with is following the separatist footsteps of Islamist terrorists operating in Jammu and Kashmir.

Note: Ansarullah Bangla Team (ABT) is also linked to Islami Chhatra Shibir, the student wing of Jamaat-e-Islami party in Bangladesh, a member of the Bangladesh National Party-led coalition under ex-PM Khaleda Zia. ABT was behind a string of brutal murders of atheist Muslim and Hindu bloggers from 2013-2015, and is also believed to be acting as a front group for Al-Qaeda in the Indian Subcontinent (AQIS).