Habitual offender and hyper Bengali sub-nationalist Garga Chatterjee has stirred a major controversy by making contentious tweets about Assam’s revered personality, Chaolung Sukaphaa. In a series of offensive tweets, he labeled Sukaphaa a ‘Chinese invader’, which has left the people of Assam enraged. 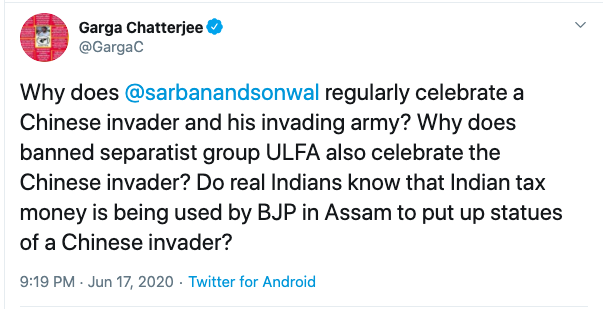 The political influencer from West Bengal slammed the BJP government in Assam for celebrating the “Chinese invader”. Assam celebrates December 2 as ‘Asom Diwas’ to commemorate the advent of Chaolung Sukaphaa, the first king of the Ahom kingdom in Assam, over the Patkai Hills from Yunnan, China.

An FIR was lodged against the TMC aide at the Dibrugarh police station, Assam, citing his objectionable remarks against Sukaphaa, the celebrated founder of the Ahom kingdom and Axomiya (Assamese) identity. Advocate Bhaskar Gogoi filed a detailed complaint on Thursday, 18th June 2020, a copy of which was subsequently shared on Twitter. Accusing Garga Chatterjee of indirectly terming Ahoms as ‘Chinese invaders’, advocate Gogoi claimed that, “These tweets coming in the wake of tense border standoff in Ladakh and general antagonism against the Chinese government at large, might lead to targeting of Assamese people in rest of India.”

He also highlighted that through his reprehensible attempt at maligning the Assamese people of having Chinese connections at a time when sentiments are running high and the country is facing escalations at the Line of Actual Control, the TMC supporter from Bengal was putting the entire Assamese community in harm’s way.  A resident of Dibrugarh, Gogoi also appealed to the government of Assam to approach the Twitter management demanding a suspension of Garga Chatterjee’s blue-ticked Twitter handle.

On June 19th, the official Twitter handle of the Chief Minister of Assam presented their strong objection at the derogatory language used for the state’s respected historical figure and its people. The CM called for stringent action to be taken against Chatterjee.

CM @sarbanandsonwal has called for stringent action as per law against one Garga Chatterjee of WB for making derogatory remarks against Swargadeo Chaolung Sukapha & Ahom community in SM platforms.

CP @GuwahatiPol has been directed to go to Kolkata today regarding the matter.

Not stopping at a mere tweet, the CM office directed the Commissionerate of Police, Guwahati to visit Kolkata immediately and arrest the accused.

Kolkata Police is not cooperating

Led by DCP Barun Purkayastha, a three-member team of Assam Police, arrived in Kolkata on Saturday with an arrest warrant against Garga Chatterjee but were held back by a huge crowd of demonstrators who chanted anti-Assam slogans, labeling Assam CM Sarbananda Sonowal as anti-Bengali. Members of Bangla Pokkho (a divisive organisation founded by Chatterjee) postured that their chief was targeted for lending his voice to the Bengalis residing in Assam.

On the other hand, a senior member of Assam Police has accused Kolkata Police of not cooperating with them. “The local authority is not supporting the team in spite of the arrest warrant. We have given the address proof and other evidence required to take the accused into custody but the local police are not cooperating,” he alleged.

Who is Garga Chatterjee?

Garga Chatterjee is a TMC troll who has appeared on several news debates to push TMC’s ideology on the national stage. He spearheads the Bengali Nationalist movement, Bongo Pokkho, in West Bengal, which surreptitiously nurtures a secessionist sentiment. He has abused Bhagwan Ram repeatedly on social media with absolute impunity. The political commentator noted for his extremist views, has flaunted his hate for non-Bengalis umpteen number of times, called Marwaris ‘dishonest’ and has made xenophobic and bigoted tweets suggesting Gujaratis, Marwaris, Biharis, and UPites must be restricted to their respective states. A visiting educationist at several Bangladeshi institutions, Chatterjee has never shied away from professing his hate for North Indians. His belligerent hatred for non-Bengalis has betrayed his hidden ambition of a ‘greater Bengal’.

Also known as Siu-Ka-Pha, Chaolung Swargadeo Chaolung Sukaphaa was the founder of the first Ahom kingdom in medieval Assam and his reign ran from 1228 to 1268.  Originally from Mong Mao in Yunnan, China, the Tai prince established a kingdom that existed for close to six hundred years and unified several indigenous ethnic groups in the process leaving a deep footprint on the region. 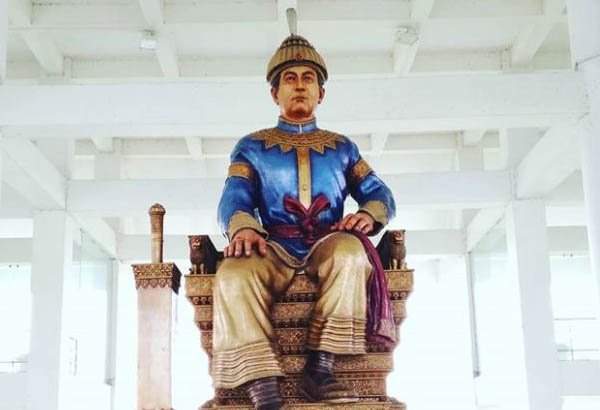 He enjoys a revered position in Assam’s history; the honorary term ‘Chaolung’ that translates to ‘Lord’ or ‘Great’ is prefixed to his name out of respect. Since 1996, December 2 is being celebrated in the state as Sukaphaa Day, Assam Day, or Asom Divas. The day commemorates his advent in Assam after his historic excursion over the Patkai Hills.

As many on social media pointed out, the Ahoms adopted and assimilated into the native culture, and formed a multi-ethnic and inclusive kingdom which ruled Assam for 600+ years and resisted genocidal invasions by Islamic rulers like Delhi Sultanate and Mughals.