West Bengal Violence Over Ram Navami – Is Display of Traditional Weapons During Processions & BJP to Blame? 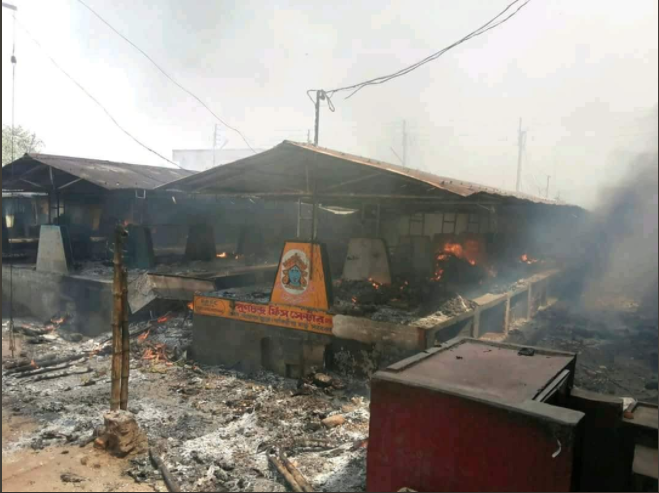 Several reports are pouring in about large-scale, organized Islamist violence against Ram Navami celebrations across Bengal, Bihar and other states. The violence in Ranjganj has been especially brutal with one person dead, a DSP’s hand chopped off, crude bombs thrown and shops belonging to Hindus burnt down. 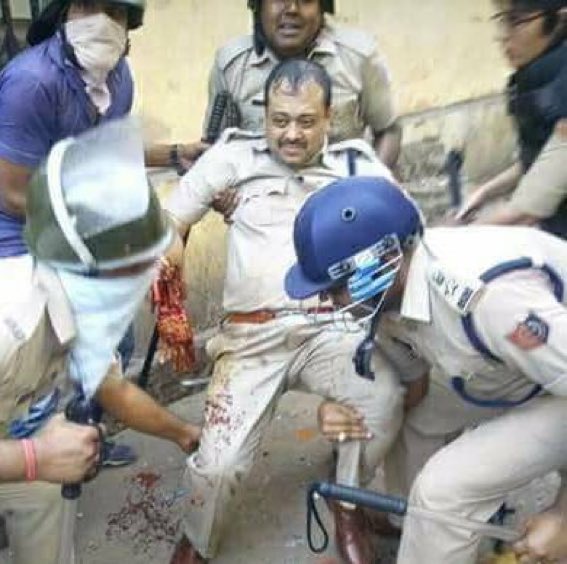 This photo of Senior IPS Officer and Deputy Commissioner of Police Arindam Dutta Chowdhury, with his hand chopped off, symbolizes the ferocity of the attackers and the helplessness of West Bengal police under a TMC administration which has given open license to Islamists organizations like Jamaat-e-Islami etc to do as they please.

As per this India Today report –

“Violence erupted on Monday morning when stones were pelted at a Ram Navami procession in Hill Bustee area.

Soon groups of people from two communities clashed with each other. Sounds of bomb blasts and shots fired have been reported as violence spread to other parts of the town.

There are reports of shops and houses being attacked and looted. Police had to resort to lathi charge and tear gas to disperse the mobs.

A number of people have been injured. Senior IPS Officer and Deputy Commissioner of Police Arindam Dutta Chowdhury has been seriously injured in the clash. A number of police vehicles were set ablaze. A contingent of Rapid Action Force was deployed to help the local police bring the situation under control.

Though violence had receded, Raniganj remained tense throughout Monday.”

The India Today report goes on to blame BJP for the violence, and indicts the carrying of arms during the Ram Navami procession for ‘provoking’ the other side. Other media establishments are also saturated with similar reports, with headlines & featured images that subliminally help the reader arrive at the editor’s desired conclusions – 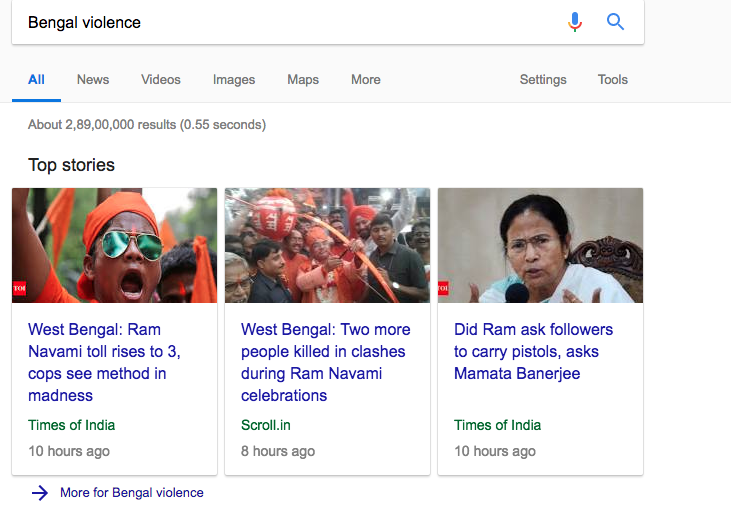 This strategy of projecting any attack on Hindus as an outcome of RSS/BJP ‘provocation’ is well-honed and something we analyzed at length while dissecting media coverage of the recent attack on a Hindu New Year procession in Bhagalpur, Bihar. The sub-text is always the same – if it were not for these ‘nasty, evil’ Sangh outfits, communal harmony & peace would reign all over Bharat.

But before we drink this secular kool-aid, lets note the following –

2.) The carrying of arms is symbolic. Hindu Dharma teaches that the goal of human life is self-realization, but it is not oblivious to the existence of Adharma, which can be loosely translated as evil. Ravana was such an Adharmic king, a highly learned Brahmin scholar and devotee of Bhagwan Shiva, yet arrogant and immoral – in the end, after all attempts to reason with him had failed, Bhagwan Ram had to use weapons to kill Ravana and end his oppressive rule.

If you look at murtis of our deities, many of them carry a weapon in one hand. Hence, the idea that weapons are required as a last resort to uphold Dharma and defend one’s way of life is integral to the Hindu worldview. Carrying the sacred trident or trishul, or other traditional weapons like mace, swords etc. during a religious procession does not make a Hindu a threat to society. Now, if those weapons are used to threaten or harm anyone, then the state is duty-bound to act.

Would our seculars use the same argument to ban the Shia Muharram procession where Muslim men, including young boys, don’t just carry knifes and swords, but actually use them to cut themselves?

Or would they object to the Sikh Khalsa tradition of carrying weapons during religious ceremonies?

3.) Many liberals are claiming that the devotees shouted ‘provocative slogans’ in front of mosques, thus ‘inviting trouble’. But no one has specified what slogans were so provocative that the they had to be responded with bombs, firearms and mob violence? Is a ‘Jai Shree Ram’ or ‘Har Har Mahadev’ provocative? By that token, the standard Islamic cries of  ‘Allah-o-Akbar’ (Allah or God is Great), or Sunday sermons which preach that idol-worshippers are hell-bound are far more provocative to non-Muslims and non-Christians respectively.

4.) Yes, Hindus were not taking out such mass processions in Bengal during Ram Navami before. But what has triggered this resurgence is not RSS mobilization – but a far deeper survival instinct.

First, lets disabuse ourselves of the notion that West Bengal had an “exemplary record of public and political harmony” before May 2014 as this Firstpost columnist Suhit K Sen, would have you believe. The 34-year-long Communist rule saw over 50,000 death due to ‘political violence’. And the TMC has mastered the same Communist methods of electoral violence & intimidation to storm to power. Islamo-fascism was always strong in West Bengal with violent protests in Kolkata, for various Islamist causes such as demands to expel Taslima Nasreen or protests against Bangladesh’s decision to hang Jamaat-e-Islami leaders for war crimes, being the norm both under CPM and TMC rule. Unchecked illegal immigration of Bangladeshi Muslim and now Rohingyas has only increased the pressure on Bengali Hindus who now have to approach courts just to get permission to celebrate their most important festival, Durga Puja.

The reality is that so oppressive has the situation become for the ordinary Hindu under the Islamist-pandering rule of TMC, that many are trying to voice their desperation and disillusionment with the brand of politics that has become normalized in West Bengal. The poor Hindu of Bengal is brandishing weapons during religious processions not out of a desire to threaten or dominate – but to warn his oppressors that enough is enough, if the State doesn’t protect me, I will stand up and defend myself.

Those who might be wondering why Muslims don’t take out similar religious processions brandishing weapons need to understand that Muslims are not on the defensive in Bharat today – the Islamists know that they can gather a mob of thousands within hours, as we saw in the mass country-wide protests to ‘hang Kamlesh Tiwari’. Muslims of Bharat are constantly fed a diet of victimhood and Islamic supremacism by their local maulvis and leaders, who work cohesively under leadership of their national bodies like JeI, JuH etc and international Saudi Wahhabi paymasters. The communal Muslim leadership is also far more savvy when it comes to managing the message and they work on a common goal along with liberal media, academics, politicians and NGO lobby. A friendly media means you will never see the same kind of audio-visual coverage of Muslim mobs that are seen right now of saffron-wearing Hindus brandishing weapons and shouting ‘Jai Shree Ram’.

Also, it is not just BJP workers who are sharing photos & videos of what is happening in Bengal. Hindu human rights organization Hindu Samhati, no ally of BJP, is also reporting the same ground situation –

This is how makeshift chariot of Shri Ram was vandalized at Raniganj. A peaceful procession came under attack without any instigation. What else to be blamed except demographic changes? pic.twitter.com/YP6A2zCmnh

Meanwhile, apart from Raniganj, clashes during Ram Navami processions have also been reported from other parts causing 2 more deaths – 1 in Purulia on Sunday, and 1 in Kakinara on Monday – and injuring more policemen.

Also, 4 people were injured after a Ram Navami pandal was attacked & burnt by miscreants in Bardhaman on Saturday night.