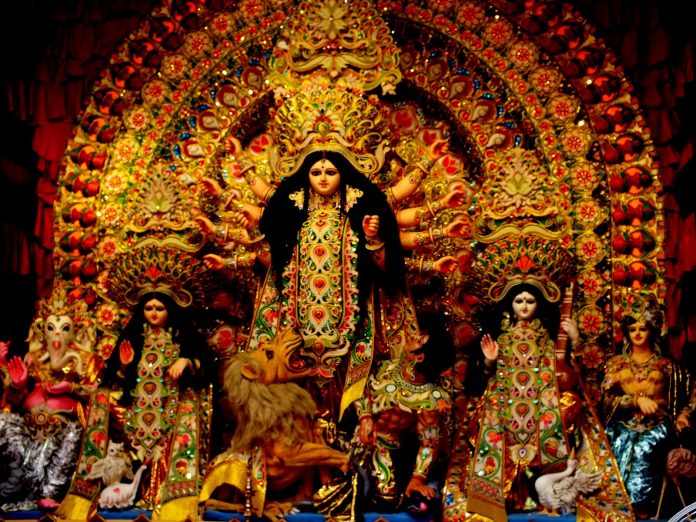 The 300 Hindu families of Kanglapahari village have a reason to smile – after four years of repeated disappointment, they will finally get to celebrate Durga Puja in their own village this year.

Denied permission to organise Durga Puja since 2012 by the district administration authorities following objections by about 25 Muslim families in the village, Hindus of the village along with rights group Hindu Samhati had filed a petition in Calcutta High Court. Today, the court passed orders overturning the Durga Puja ban imposed by the TMC Government.

This year, there will be Durga Puja at Kanglapahari village- Hindu Samhati ensured through order of Calcutta HC.

After running from pillar to post and despite the issue being highlighted in national media since last year, it finally required litigation for Hindus of Kanglapahari to exercise their fundamental right of freedom of religion.

As always, any violation of Hindu human rights always has a ‘secular’ argument explaining why the alleged violation is perfectly legal and justified. Left-liberal propaganda site Scroll.in did not disappoint with this Nov 2015 piece ‘Was Durga Pujo really banned in a West Bengal village?‘

In this article, the writer, Shoaib Daniyal, claims that Hindus of Kanglapahari have not suffered any discrimination. He starts off by informing us about the demography of the village-

“Kangla contains 200 households, around half being adivasi. The rest are split almost equally between Hindus and Muslims.”

So at the outset, by claiming tribals (adivasis) as non-Hindus, he has seeded the thought in the reader’s mind that Hindus and Muslims have equal numbers in the village and hence there is no case of ‘minority appeasement’.

For the secularists like Daniyal, counting non-Christian tribals (about 5% of Bharat’s total population) as Hindus or not depends on the context. When they want to guilt trip Hindus for rising ‘majoritarian intolerance’ despite constituting ‘80%’ of the population, tribals are counted as Hindus. Otherwise they are not, and in that case, Hindu discourse treating tribals as Hindus is decried as ‘assimilative communalism’.

But the fact remains that tribal religions of Bharat have a deep kinship with mainstream Hindu religion, while being completely alien to Abrahamic religions like Islam and Christianity, as this paper by Dr. Koenraad Elst argues.

Thus, despite Daniyal’s attempts to drive a wedge between the tribal & non-tribal Hindus of Kanglapahari, most likely all of those villagers would be participants in Durga Puja festivities.

Next, Daniyal uses a standard technique of secularist writers – he hints at rising BJP presence in a locality as the driving force behind ‘communalization’ of Hindus :

“One thatched mud storeroom has an incomplete idol of Durga barricaded behind a bamboo screen. Facing this is a billboard, pitched into the ground, on which the faces of Atal Bihari Vajpayee, Narendra Modi and Anil Singh, the Bharatiya Janata Party representative for the administrative block. Chandan Shaw is a local BJP worker and the leader of the efforts to organise Durga Pujo in the village.”

This is a very effective technique using which any report of persecution of Hindus can be dismissed as BJP-Sangh propaganda. Unfortunately, in the digital age, it is increasingly difficult to hide the reality of growing Islamic radicalism in states like Tamil Nadu, West Bengal, Kerala etc. where RSS-BJP have negligible presence. The frequent rioting involving Muslim fanatics and other communities like Hindus (Jats, Dalits etc), Jains and Sikhs in Western UP also pokes holes in the secularist projection of RSS-BJP as the sole cause of  the ‘communal problem’ in the country.

Daniyal, then goes on to add –

“The Muslims (of the village) agree with the version that Scroll had heard till now via news reports – they were opposed to the pujo. But they also added another crucial piece of information: not only Durga Pujo, the Eid sacrifice is banned in the village as well; and for much longer than the pujo.

In 2003, some local Hindus complained to the police about cow slaughter in the village during Bakr Eid. As a result, the police came in, made arrests and slapped a case on the people involved in the sacrifice. Since then, the administration has prohibited the Eid sacrifice in Kangla Pahadi.”

Voila – Durga Puja ban is justified in Kanglapahari since Muslims too are not allowed to sacrifice cows for Eid. So, to celebrate Eid, it is necessary for Muslims of Kangla Pahadi to slaughter a cow – sacrificing other animals like goat, sheep will not do. If they are not allowed to publicly sacrifice a cow (West Bengal is one of the few states where cow slaughter is legal), they will not allow any Hindu festivity on Durga Puja – and this is perfectly valid reasoning for our seculars. A similar issue is seen with Muslim fundamentalists’ objection to use of temple loudspeakers during the month of Ramzan – the fact that mosque loudspeakers are used 5 times a day the entire year (even during Hindu festival season) is deemed ‘irrelevant’.

Now that courts have overturned the administration’s ban on Durga Puja, we can be sure there will be a secular response – Mamta’s administration & the left-liberal cabal in Delhi will be sure to ensure that cow sacrifice takes place in next year’s Eid, if that indeed is the reason behind the resistance to Durga Puja in Kanglapahari.

But for now, the villagers of Kanglapahari can rejoice – they have won a rare legal respite from the courts to practice Hindu Dharma in time-honored tradition.