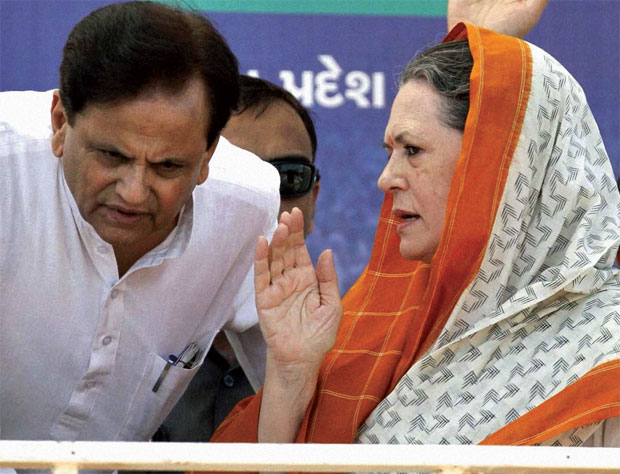 The skeletons in Sonia Gandhi’s cupboard are tumbling out fast and thick now. In a stunning expose of her role in the $451 million deal for 12 VVIP AugustaWestland helicopters where kickbacks were paid by middlemen to Congress politicians, bureaucrats, and Air Force officers, an Italian court judgement convicting AugustaWestland chopper company chief Giuseppe Orsi has named Sonia Gandhi, her secretary Ahmed Patel and other Congress luminaries as recipients of those kickbacks. As per this report in PerformanceGurus website (emphasis added)-

“The Italian court’s judgment exposes the role of Sonia Gandhi, Manmohan Singh in AgustaWestland Chopper Deal. The 225-page judgment also reveals that Sonia’s Political Secretary accepted the commission of €15 to 16 million ($17 – 18 million) from the middlemen. The judgment of the appeal court in Milan convicting AgustaWestland chopper company chief Giuseppe Orsi described how the firm paid bribes to top Congress leaders in India and lobbied with them to bag the Rs 3600-crore ($451 million) deal. Reproducing the handwritten notes seized from middlemen, the judgment says that the political leaders accepted the commission of 15 to 16 million Euros (around Rs.120 to 125 crores) in the controversial purchase of 12 VVIP chopper deal. It also names the role of Sonia Gandhi’s trusted aide and AICC General Secretary Oscar Fernandes and the then National Security Advisor MK Narayanan (Page 193).”

This handwritten note exchanged between the middlemen shows how the total commission of Euro 30 million was divided between Congress leaders(€ 15/16 million), bureaucracy (€ 8.4 million), and Air Force officials (€ 6 million).

A letter dated March 15, 2008, seized by investigators shows the main middleman Christian Michel, who is still a fugitive, writing to Peter Hulet, then India region sales and liaison head of the helicopter company. The letter states that Sonia is the main driving force behind this deal and she will no longer fly in the existing MI- 8 choppers. The letter is quoted verbatim in the judgment. Details of lobbying and corruption of Congress leadership, writing to the then British High Commissioner in India that he should target top Congress leadership for clinching the deal are clearly explained.”

“The judgment also says Haschke had identified all the Congress leaders including Sonia Gandhi and Ahmed Patel on the court when their photos were shown to him during the trial by the Italian prosecution.”

“In Page 163, the Judgment produces a hand-written note by Orsi from jail in July 2013 asking his people to contact then Italian Prime Minister Monti or Ambassador Terracciano to call Manmohan Singh”

Was Ahmed Patel more influential than even Manmohan Singh during UPA rule?

In his book The Accidental Prime Minister: The Making and Unmaking of Manmohan Singh, Sanjaya Baru, who was former PM Manmohan Singh’s media adviser, unveils several facts about Congress president Sonia Gandhi’s political secretary, 65-year-old Ahmed Patel, and his role in the party as well as the UPA government. Baru reveals that all political messages between Sonia and Manmohan Singh used to be routed through Patel. An increase in the frequency of his visits to the PM signalled an impending Cabinet reshuffle, writes Baru. Patel had the power to influence decision-making until the very end of the UPA regime.

Patel had been a close aide of Sonia even before she stepped into politics. Often referred to as Sonia’s “crisis manager”, he is considered the most influential person in the party after the Gandhi family. “All roads to Sonia Gandhi pass through Ahmed Patel,” it is said.

Omerta is a mafia code of silence about criminal activity and a refusal to give evidence to the police. While media in Italy was busy reporting the Congress links in the corrupt AugustaWestland deal , such details were conspicuously absent from Bharat’s media, and remain so to this day!

This appeared in Italian newspapers during UPA. Not one daredevil patrakar or media house dared to follow the story. pic.twitter.com/dXSjYwzyDS

While authorities in Italy were busy investigating the shady chopper deal from the moment the scam broke in 2010, their counterparts in Bharat were busy in stalling and obstructing the probe, despite a CAG report tabled in Parliament in 2013 which charged former national security advisor M K Narayanan and former IAF chiefs S P Tyagi and Fali H Major as key officials who tweaked various specifications that finally resulted in the 12 VVIP helicopters deal with AgustaWestland.

In a token gesture, in 2013 CBI had registered a first information report (FIR) naming 13 accused including including S P Tyagi, his three cousins Julie, Docsa and Sandeep Tyagi, brother of former Union minister Santosh Bagrodia – Satish Bagrodia, European middlemen Carlo Gerosa, Christian Michel and Guido Haschke and companies linked with the payments. But there was no real intent or direction to the investigation.  The Italian prosecution’s statements recorded in the court judegement clearly show that they never received the desired support from Bharat. This not surprising, given that the top-most powerful figures in UPA-2 were involved in this scam – Sonia Gandhi & Ahmed Patel – the Manmohan Singh Government effectively scuttled the probe from Bharat’s end.

It was only after the new NDA govt was sworn in on May 2014 that our investigative agencies like CBI, ED etc seem to have woken up. As per this news report from Oct 2015 –

“A source said the CBI, which is also investigating the case, has already moved a request for a red corner notice against (key middleman) Michel for his arrest in connection with irregularities in the Rs 3,700 crore chopper deal.

Officials investigating the case are confident that Michel’s arrest will help the agency crack and arrest the actual beneficiaries in the deal.

The ED had registered a case under Prevention of Money Laundering Act (PMLA) last year against the accused. Later, in a property attachment order, the agency had alleged that bribes were paid by Michel, Gerosa and Haschke to Indians to swing the deal in favour of AgustaWestland of UK, a subsidiary of Finmeccanica of Italy.

The ED has already attached five properties in Delhi and the national capital region*, some of which belong to Tyagi’s cousins who are also being investigated under PMLA. Earlier, the agency had arrested businessman-lawyer Gautam Khaitan in the case. He is currently out on bail after ED filed first chargesheet in the case.“

Do Media and Politicians Lack the Will to expose Sonia Gandhi?

Despite the good work investigative agencies are doing in the background, it is vitally important to publically expose the true face of Sonia Gandhi and the thoroughly corrupt, inefficient and dangerous (see this) regime she ran for 10 years. The credibility of our media is at an all time low, and plumbing new depths with each passing day. Their extreme reluctance to air any negative news around Sonia Gandhi is well known – this self-imposed censorship is explained by the well entrenched Congress ecosystem of graft which has benefited many a senior journalist, liberal ideological leaning of many media houses in which Sonia is seen as a savior, or just outright fear of her vindictive ruthlessness. So it will be foolish to expect our national media to take Sonia to task. Which leaves us only with politicians, especially the ruling BJP party – but the signs emanating from that quarter are also puzzling –

Yes, we will expose Sonia –

BJP’s Meenakshi Lekhi gives notice for discussion under rule 193 on the issue of AgustaWestland in Lok Sabha.

But certain other ‘media-friendly’ & ‘classy’ BJP leaders who find favour with our anglicized media seem to suggest otherwise! Are these the motor-mouths BJP should worry about, rather than the likes of Sadhvi Niranjan Jyoti who are bashed by media elites for their earthy truisms?