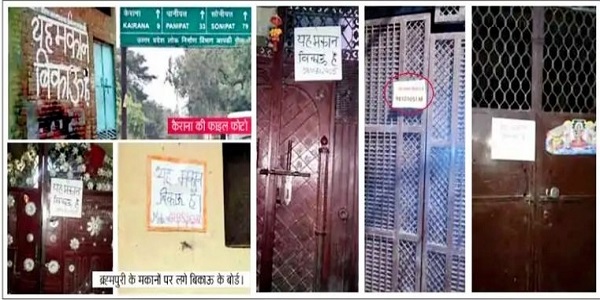 Many Hindu families in North East Delhi’s Brahmpuri area are planning to sell their houses and move out after a dispute with their Muslim neighbours over building of a mosque turned ugly. As reported in Hindi dailies like Navbharat Times & Punjab Kesari, this dispute began when a building housing a factory in the colony was turned into a mosque. When Hindus of the area opposed the move, they were harassed in a targeted manner due to which people have now installed ‘House For Sale’ boards outside their homes.

The issue occurred in street number 8 of Brahmpuri colony, Shahdara, which is part of Seelampur Assembly constituency. In this lane, around thirty Hindu families and a dozen Muslim families live. Sometime back, locals got to know that a building in the area which used to operate as a factory is being converted into a mosque. Suresh Kumar, who lives in the house opposite this building, called the police, who calmed the situation and locked the factory.

The situation was on the verge of becoming normal, but some members of the Muslim community became adamant that mosque will be built on that site only and Muslims will read namaz there, Punjab Kesari reports.

On the night of 9th August, around 1000 to 1500 Muslims gathered here and shouted slogans for the mosque to be built. The terrified Hindu families could not dare to come outside their homes. Police arrived in the nick of time and ensured that no one got hurt.

The very next day, on Friday 10 August, Seelampur’s AAP MLA Mohammed Ishraque (also known as Haji Ishraq Khan) reached the site to read namaz. Locals are questioning why the MLA is inflaming the situation and politicising the matter. They say that on the one hand, Haji Ishraq Khan talks of Hindu-Muslim unity by visiting Shyamgiri Temple on the occasion of Eid, but on the other he is showing that he is first and foremost a Muslim by specifically reading namaz at the disputed site. 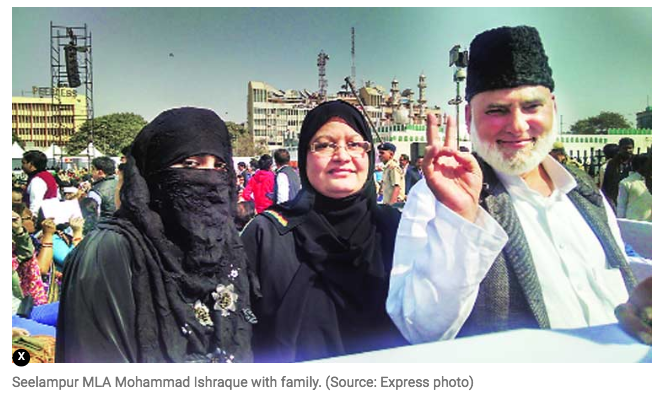 Incidentally, MLA Mohammed Ishraque has not received any formal education and has attended  madrassa till fifth grade.

Suresh Kumar’s family allege they have received threats of being blown up in a cylinder blast. Ram Niwas Sharma and family, who have been living here for two generations, have stopped moving about in the street. They say that the noise of motorcycles zooming around is a deliberate ploy to disturb the peace. Politicians of the area have failed to manage the situation and are making it worse. In such a situation, it is better to sell their house and leave, they say.

Another resident, Ashok Sharma, says, “People throw garbage outside our houses, sometimes even pieces of meat. Hindus are being forced to sell their homes and leave the area. We don’t have any option.”

Police force has been deployed to monitor the situation. DCP Atul Kumar Thakur said that the situation is ‘completely normal’ at the moment and those who have put ‘House For Sale’ boards outside their houses are all staying there right now. He said that strict action will be taken against anyone found spreading ‘rumours’.

MLA Haji Ishraque Khan told Punjab Kesari, “Muslims living in Street No. 8 of Brahmpuri have bought the plot to build a mosque. Yes, I performed the jumma (Friday) namaz there. Some Hindus have objectd to the building of a mosque, but we will talk to them and resolve the matter.”

Shifting of Hindu families from ‘sensitive’ areas of West UP & Delhi-NCR area has been talked about in whispers for many years now, but the issue first came to national limelight in 2016 after around 300 Hindu families fled Kairana in Shamli district due to fear of the members of a particular community (Muslims) which was in majority in the area.

Despite an NHRC (National Human Rights Commission) fact-finding team confirming the exodus as a reality, and listing reasons as persistent sexual crimes and murder/extortion/dacoity targeting the Hindu community, the Kairana exodus has been dismissed as ‘scaremongering’ by MSM and liberal intelligentsia.

A quick look at the map shows how North-East Delhi, where both Brahmpuri and Sundar Nagri fall, and which is just 30 km from the nation’s Parliament,  is gradually turning into an ‘unsafe’ zone for Hindus. 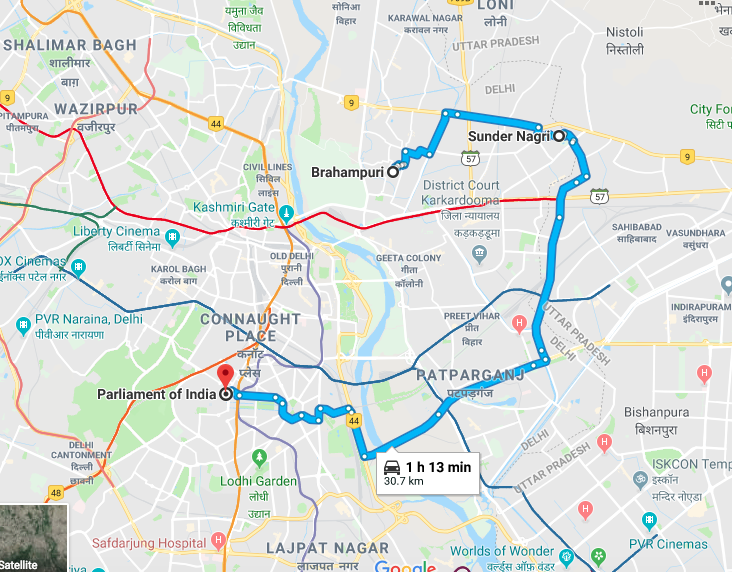 (h/t to @agg_garima for sharing this news; featured image Source)