Rinku gave blood for pregnant wife of man who lynched him, kept saying ‘Jai Sri Ram’ till the end Hospital lab technician Rinku Sharma who was brutally lynched and stabbed to death on Wednesday night had donated blood twice to the pregnant wife of one of the accused over an year back when she was in a critical condition.

The young man, known for his cheerful and helpful nature by locals, and his family were attacked inside their house by a neighbouring Muslim family that they knew well. 5 brothers of the accused family, some women and kids, and other associates – a mob of about 25 to 30 – gathered and barged into Rinku’s house and brutally assaulted and stabbed him, the Sharma family said. Rinku’s brothers were also assaulted and an attacker even grabbed his mother Radha Devi’s throat.

As per Radha Devi, Rinku kept raising ‘Jai Sri Ram’ slogans even while he was being mortally attacked.

The enmity that the Muslim family had for Rinku is connected to a donation drive for the Ram Mandir that was organised recently in the area in which Rinku and others had taken part. Even before that Rinku was involved in a small event organised for Ram Mandir last August. On that occasion, the accused had got into a spat with him and threatened to teach Rinku a lesson, but the matter was settled with intervention of others. The accused had even pleaded with Radha Devi not to file FIR back then claiming they are like her children. The accused also took offence at Rinku and his family’s support for PM Modi and BJP.

On Wednesday night, Rinku had gone for a birthday party where the accused picked an argument with him, and this time stormed into his house to assault him and leave him half-dead.

One can listen to the painful video testimony of Rinku’s mother, father and brother.

Incidentally, a police station and hospital are within a hundred metres of Rinku’s house, but that still did not help to save his life. Horrifically, the family says that some of the accused even tried to stop them as they were rushing a critically wounded Rinku to hospital, and even in the hospital they twisted the knife deeper into his back and slapped a barely conscious Rinku.

The accused family locked their house and left the area on Thursday morning, but the entire area is in terror and shock. The police have reportedly arrested four of the accused – Mohammad Islam, Danish Nasruddin, Dilshan and Dilshad Islam.

Police has claimed the murder was solely the result of a brawl during the birthday party, but locals say  police is just trying to divert attention from the case by papering over the real cause. Some have also alleged that a police informer (mukhbir) was part of the attackers. 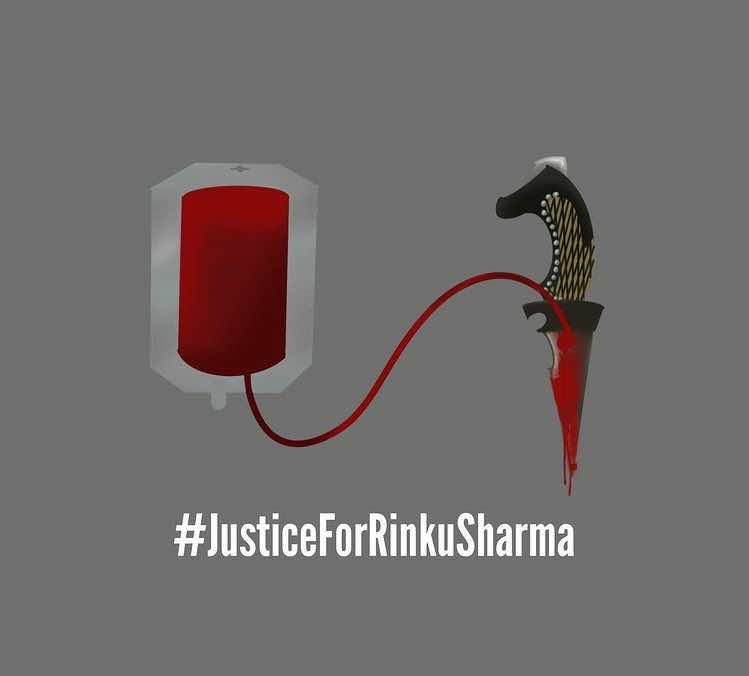 Almost all English-language mainstream media outlets are toeing the police version, ignoring the repeated pleas of Rinku’s family and locals about the real motive. Only the much maligned Sudarshan News, and Hindi newspapers like Dainik Jagran have provided honest reporting.

Murderous attacks on Hindus in Delhi have now become a norm, especially in mixed-population areas – Dr. Pankaj Narang, Dhruv Tyagi, Ankit Saxena, Shubham, Rahul Rajput …the list is endless. The reasons may vary, but the brutality of the crime is linked to the religious hate for the other, the kafir. In many cases, women are actively involved in assisting their male family members in committing the murder. If one looks at cases like this all over the country, the scale of the problem is truly frightening.

Those living in safe middle-class areas or gate societies may think all this doesn’t affect them, but rest assured its just a matter of time. As the residents of Nodia’s upscale Mahagun Moderne society found out, it doesn’t take much for this religious fanaticism to reach your doorstep.

Rinku is now survived by his mother Radha Devi, father Ajay Sharma and brothers Ankit and Manu Sharma. Will the party and organisation he laid down his life for ensure that they use their power to get rapid and harsh punishment for his murderers? Will Hindus move on from this tragedy too, or will Rinku’s death for a cause he passionately believed in and for which he worked as per the law of the land while respecting the humanity of others, finally trigger something in our dead hearts and minds?