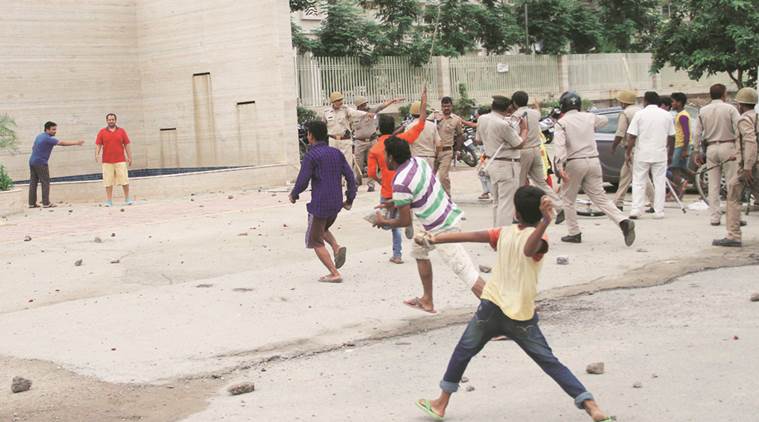 A Muslim mob attacked an upscale gated residential society Mahagun Moderne in Noida Sector 78 early on Wednesday morning, following rumors of a maid, Zohra Bibi, being assaulted/held captive after she was caught stealing by her employers on Tuesday evening. Zohra Bibi’s husband, Abdul Sattar, claims that his wife was assaulted & was confined the entire night, which is why he returned the next morning around 7 AM with other members of his community to ‘enquire’ about her whereabouts.

That ‘enquiry’ soon turned into full-blown rioting with stone pelting and vandalism with rods on the society where over 2000 families live – the attack continued even after police arrived and lasted for a total of 3 hours. A group of 30 people stormed into the house of Mitul Sethi, a Merchant Navy captain whose wife Harshu had reported the theft, and ransacked the entire house. The family consisting of husband, wife and their  7-year-old son – had to lock themselves in a bathroom to save themselves from the rampaging mob.

“Yesterday our Bangaladeshi maid who does cleaning was asked if she has stolen money as we had intuitions that she is doing that. We told her that we have a video of her stealing money from home. She thought that she got cought and she accepted that she had stolen Rs.10000 which she asked to adjust in her salary. We denied that and said that we will inform about her in facility as she can do this in other 12 houses of Mahagun too. She insisted not to inform in facility as she will loose work. But we chose to inform in facility and asked her to come to facility with us. When asked to come to facility she ran away and the same will be cptured in cctv too. She left her phone at my home in this incident. The time was around 5:30 in the evening and on the spot i went to facility, informed everything to Mr.Ramaswami in facility and submitted the phone to him. He said you don’t worry and he will take care of it as these Maids as they do this often. I went back to home.

Then at 9 pm 2 ladies from Mahagun came to my home along with the husband of the maid and 2 guards. They asked us that this Maid Zora dint came back home. I informed the whole incident but suddenly her husband asked me that you have taken her phone. I thought how his husband knows that the phone is with me if his wife dint reached back home. I came to know that they are making story and the same was analysed by the mahagun ladies who came with him.

Then around 10:30 her husband came again with 2 policemen at my home. He might had called on 100 number. He was asking me that where is his wife. I informed the whole incident again to police and also told them about the phone. Policeman shouted on his husband and asked him not to disturb us. They also told me and they do these things often and you don’t need to worry. They told her husband to search for his wife outside or file a complaint as she is not here and we do not have to do anything with her.

We slept assuming that the story is over pledging not to hire any Bangladeshi Maid in future..

But in the morning they came in groups and you all know the scenario. They entered in my house by breaking the door glass. It was terrifying. It’s about our life and I am afraid about the safety of my family and kid.
I believe if searched on cctv it can be found how, when and where this maid went out of Mahagun.

Below is a screenshot of a WhatsApp message from one of the society members which narrates the harrowing, near-death experience the Sethi family underwent – (note: HinduPost has not been able to independently verify this statement)

Residents of Mahagun Moderne and other societies in Noida are abuzz with discussions regarding the threat posed d by these Bangladeshi workers. But the fact is that non-Bengalis have no way of knowing for sure whether someone is Bangladeshi Muslim or a Muslim from West Bengal. In this case, media reports claim that the maid and her neighbors who attacked the housing society are from Cooch Behar in West Bengal. Police has said that the maid had all necessary documents and was not an illegal immigrant. But given the ease with which fake documents can be procured and sub-standard policing, such statements should be taken with a pinch of salt. Anyway, seeing the current situation in West Bengal, there is not much difference in behaviors & attitudes of Muslims on either side of the border.

What is the maid’s story? How is media spinning this news?

The mob led by Abdul Sattar, his brother Muzaffar and others was convinced that the maid was kept hostage entire night and physically assaulted. Some are even alleging sexual assault.

Below facts are clear, which even Abdul Sattar has confirmed in his multiple interactions with the media –

So despite two visits to the Sethi house, one of them being a police visit in which the house was searched, the husband was still convinced that his wife was kept hostage by the Sethis? In the middle of the night, this man rounded up an angry-mob and brutally attacked the residential society at the crack of dawn? And even after Zohra Bibi was found in a different house (the 25th floor flat where she spent the whole night of her own volition), the mob kept attacking the society in the presence of police, and are now playing victim by claiming that the woman was recovered from the Sethi house with “clothes torn, injury marks on her back, broken hand” and what not.

But CCTV footages have captured the woman walking out of the other apartment in the morning where her clothes were not torn.

“Every individual in the society is scared after Wednesday’s incident. There is no way they can trust the Bangladeshi domestic helps anymore. We will clear their dues and take the help of an agency that provides domestic helps. Children were frightened to see the ugly situation,” said Dr Amit Sachdeva.

“As a standard practice, we used to give forms to the maids and tell them to get them verified from the police. After verification, entry passes were issued. There is record of the entry and exit of society visitors and the helps. None of us knew such a situation would arise. Those who pelted stones work only in this society and it shows none of us are safe. It can happen to us also,” said Brijesh Singh, a resident.

“We want the police and administration should intervene into the matter. In future, this will become a culture in Noida and residents will have no say. From rape to assault, every allegation was levelled against the residents of our housing society. Every person on the side of the maid has their own version. This can turn dangerous,” said Vibhuti Chaudhary, a resident.

“The family locked themselves in the bathroom. There was heavy stone pelting and lathi charge. The maid was found in the morning in a nearby flat. I am yet to understand, how these people dare have the audacity to enter a residential complex and create such ruckus. Everything is recorded in the CCTV camera. Things will be very clear,” said the resident.

Here are some videos of the chilling incident –

Noida mayhem: Everybody had a free run in the upscale gated society. Only the cops looked like mute spectators.
Watch video! pic.twitter.com/IrZzHrAPbv

While reports of communal disturbance in places like Baduria, Muzaffarnagar, Dhulagarh, Kannur etc sound distant and even ‘exaggerated’ to the average mall-hopping urban Hindu, such incidents show that no one is truly safe from this menace. Real power rests in the hands of those who assert themselves and make themselves heard. Last year, we saw the brutal lynching of a dentist Pankaj Narang in West Delhi at the hands of a Muslim mob, and now we have this assault in Noida.

Will we continue to live in a fool’s paradise even now, swayed by #NotInMyName propagandists, or will we take cognizance of the ugly reality that stares us in the face and take corrective action? Will we understand to care for our own first, before indulging in useless virtue signalling of pseudo-secularism?