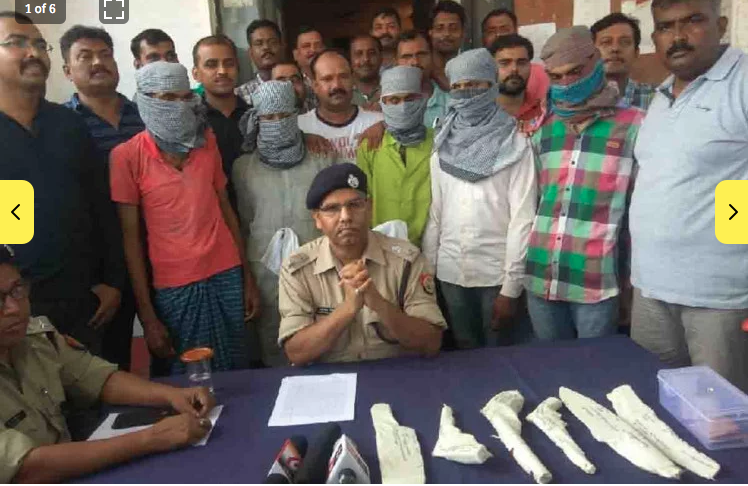 The UP police have arrested 5 cow butchers – Salman, Nadeem, Sehzaad, Majnu alias Nazim and Jabbar – for the gruesome torture and murder of two sadhus in Bhayaknath mandir, Auraiya district. Another sadhu was critically wounded in the attack and is struggling for life in hospital.

The attack was planned by 14 people involved in the illegal cow slaughter business – 9 accused are still on the run – as per a report in Amar Ujala. The five arrested men have confessed to murdering the sadhus because the victims opposed illegal cow slaughter by the accused, said police. Gaffar, Shahbaaz, Sahibe Alam, Chote, Bhole, Danish, Raja, Chaand, and Jabbar are the other 9 said to be involved in the heinous crime.

Dainik Jagran reports that the accused wanted to take revenge as the sadhus had got their relatives, also involved in the cow slaughter trade, arrested. Salman, Nadeem, Sehzaad, Majnu are also wanted in earlier cases of cow slaughter.  Police confiscated two bikes, three country revolvers, cartridges, 6 sharp weapons and Rs 1680 stolen from the temple’s donation box from the accused. It is suspected that they stole money and left the sadhus’ belongings in disarray to mislead the police and make it look like the murders were committed for loot.

The sadhus were tied down to their beds, limbs akimbo and subjected to painful torture – their tongues were cut out and bodies had multiple stab wounds – before their throats were slit. Kanpur range senior police officer Avinash Chandra said the priests were found lying in a pool of blood. The two murdered sadhus are Lajja Ram and Harbhajan (several English MSM outlets like NDTV appear to have incorrectly reported the 2nd murdered sadhu’s name as Halke Ram). The third sadhu, Ram Sharan, was critically injured and referred to a hospital at Saifai in Etawah.

People grew violent after the barbaric attack and some shops were attacked in protest while nearby areas witnessed a shut down. But things have now limped back to normal with heavy police presence.

Amar Ujala has reported that the BJP MLA of the area, Lakhan Singh Rajput, visited the temple 4 days after the incident along with other party leaders and assured the affected family members of strict action. There is no report of any other party visiting the area as yet. The critically wounded sadhu Ram Sharan’s son Sarvesh said that they are yet to receive any aid for his father’s treatment, as was promised by the administration.

UP Chief Minister, Yogi Adityanath, had ordered the police to probe the incident with highest priority and as a result seven police teams were formed to work the case. The CM also announced financial aid of Rs 5 lakh each to the kin of the two deceased sadhus and Rs 1 lakh for the injured.

Cow slaughter is banned in the majority of states of Bharat, and in Uttar Pradesh it is banned under the stringent U.P. Prevention of Cow Slaughter Act, 1955. Yet, illegal cow slaughter is rampant across UP, and indeed across the length & breadth of Bharat. The cattle smuggling mafia is well-armed and ruthless – they often get into shoot-outs with police, ram through barricades, or murder innocent villagers trying to protect their cattle. At times, huge mobs resort to mass violence when police enters ‘no-go’ areas to arrest those involved in the illegal trade.

Senior police officials have warned that cattle smuggling is a major organized crime which has cross-border ramifications and is also used to generate funds for terrorism. Regions like Western UP and Mewat have become hubs of this illegal trade.

Yet, the narrative in English language mainstream media and among the liberal intellectual and political class has been to project the beef mafia as innocent cattle traders, while those opposed to cattle slaughter are portrayed as evil vigilantes. Will the brutal murder of two sadhus finally awaken us to the actual ground reality?