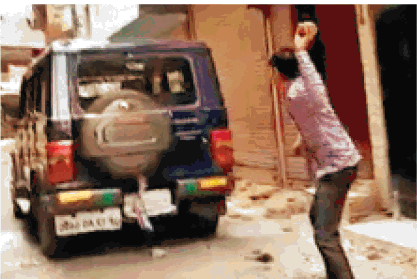 3 separate instances of illegal cow slaughter, two involving fierce attacks on police trying to arrest the criminals, have come to light from Muzaffarnagar, UP in a span of 4 days.

A police party that had gone to stop illegal cow slaughter out in the open in Khalapar locality of Muzaffarnagar, UP on Tuesday was savagely attacked by a mob with stones and firearms. 4 policemen were injured and the mob managed to free 3 accused who had been arrested by police.

After receiving a tip off, police found evidence of cow slaughter and arrested Mustakim, Mahan and Kala. As they were taking the accused in the police jeep, a crowd started pelting stones from all sides and, despite air firing by police, managed to free the accused. The police vehicle was badly damaged and 4 policemen were injured. The mob remained aggressive even after a large police contingent arrived to control the situation.

Later on, a UP 100 PRV (Police Response Vehicle) no. 2205 was going to Shamli bus-stand. As the vehicle entered Khalapar locality, some youth started attacking it ferociously – they ran after it for some 100s of metres and assaulted Constable Sompal. In a separate incident on Tuesday evening, police received information about cow slaughter in the jungle around Katka village, Jansath tehsil, Muzaffarnagar. On seeing the police, the criminals started fleeing but were surrounded. They then started firing on police and 4 policemen were injured. Police managed to arrest two – Bhura (a.k.a Israel) and Khaleel – while 8 persons managed to flee; they recovered one dead and one live bull, cow slaughter tools & weighing scale and two country revolvers. It was later found that the accused were pretending as farmers during the day and used the two bulls to plow a field – in evening, when the other farmers returned home, they started butchering the bulls. Last Saturday, police charged seven people and recovered around 100 kilo of beef when they intercepted seven smugglers who were butchering a stolen cow in the middle of the road in the Khalapar locality (same as in Case 1), Muzaffarnagar. The accused managed to flee but a case has been registered against Zulfikar, Gaffar, Dilshad, Farman, Usman, Chotu and Mehtab. Even a stolen bike was recovered from the scene of crime. The cow was stolen from farmer Dharamveer Saini’s house on 19 June. Police said that the cow trafficking gang supplied beef to Delhi, Haryana and Uttarakhand.

Even in the subdued reporting of these incidents by MSM, one India Today TV anchor couldn’t help but inject her agenda – “”cow vigilantes take law in own hands”.

What we are seeing in UP and in many pockets across the country is a low-intensity conflict – these are areas which are de facto no-go areas for police, leave alone other arms of the Bharatiya state. And this is the real battle for the soul of Bharat that our media and anglicized intelligentsia want to gloss over and divert attention elsewhere.