Yes, Let’s #TalkToAMuslim – About The Muslim Victims of Islamism 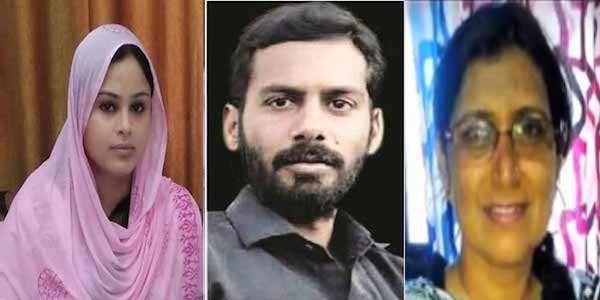 Bollywood and placard activism go hand-in-hand. This new trend of the Bollywood brigade manufacturing a issue when a movie is about to release has become very predictable. Just like fake liberals and so-called intellectuals, these Bollywood celebrities also believe in manufactured outrage aligned to their agenda.

Recently, the master of Bollywood placard activism, Swara Bhaskar, tweeted with a hashtag #TalkToAMuslim’. She, perhaps, wanted to sing the same old tune of ‘intolerance is on rise in Modi’s India’ again.

#India stands up for love and peace @BJP4India SO SHOULD YOU. It’s not a crime to #TalkToAMuslim @RahulGandhi pic.twitter.com/7ISbu20GUK

While many have exposed this phony #TalkToAMuslim campaign as peddling usual Muslim victimhood, creating a siege mentality that translates into a captive Muslim votebank for ‘secular’ parties, and designed to pre-empt an honest conversation on real threats facing Hindus in volatile areas like West Bengal, West UP, Kerala, Assam etc., there is another aspect which needs to be called out.

First and foremost, let us start talking to those ordinary Muslim men & women who are lynched, boycotted, or stifled by their own Muslim community for daring to challenge the Islamists and mullahs. These Muslims, who are the victims of this dangerous Muslim brotherhood, find no empathy or support among our eminent social thinkers, Bollywood placard activists, or civil society think tanks.

Here we list certain cases of Bharatiya Muslims who faced gross violation of human rights from radicals within their own community, but whose cause was not considered ‘secular’ enough for our so-called liberals & elite intellectuals to outrage over. As a consequence, the Islamists get emboldened and continue to exercise an iron grip over 200 million Bharatiya Muslims.

The recent case from UP’s Bareilly where the Imam of Bareilly’s Jama Masjid issued a fatwa, a ruling on a point of Islamic law, against a woman named Nida Khan, who had been opposing several Islamic practices, including Triple Talaq, Nikah Halala, polygamy and demonstrating against the same. As reported in ANI, apparently she was the wife of a relative of the Imam and was also a victim of Triple Talaq. She had been fighting for justice for many other victims of the laws that she had termed ‘Non-Islamic’. As reported in The Times Of India, the Fatwa issued against her says that nobody should greet her, eat with her, treat her if she falls ill and not even read last prayers if she dies. She is just one case but there are many such victims of Triple Talaq.

Now, where is the fake feminist brigade of Bharat who come up with placards to selectively outrage in cases where Hindus are accused? Is this case of a woman fighting against evils of Islamic society not strong enough to call for women empowerment? #TalkToAMuslim about Nida Khan.

H. Farook, a 31 year old Muslim in Coimbatore, Tamil Nadu, was killed by radical Islamists because he was considered an apostate. He was an atheist who often used to criticize Islam’s ill practices on social media. As reported in The Indian Express, a few days before his murder, he posted a photo of one of his children holding a placard with the handwritten slogan “Kadavul illai, Kadavul illai, Kadavul illai (No God, No God, No God)”. As per the arrests made by Coimbatore police, the main accused – Saddam Hussein, Abdul Munaf and Jaffer Ali – were all known to Farook.

So-called liberals blindly insult Hindu Dharma and get away with it. When corrected with facts, they accuse ‘intolerant’ Hindus of ‘trolling’. Will they raise their voice for H. Farook who was murdered because he had rejected the religion of Islam? #TalkToAMuslim about H. Farook

Shireen Dalvi, the Mumbai editor of Urdu daily Avadhnama reproduced one cartoon from French satirical magazine Charlie Hebdo after the deadly Islamic terror attack on the magazine’s office in Paris. As reported in Firstpost, soon after she had published the cartoon, she was arrested by the Thane police for offending religious sentiments. About six police complaints were registered against her. Even after being released on bail, she used to go around in a burkha to avoid being recognised by members of her angry community. Shireen is a Muslim herself, and a widow with two children. She is a professional journalist with over 20 years’ experience.

Where are the crusaders of Freedom of Expression (FoE)? When the MSM and so called eminent journalists cry ‘attack on FoE’, why is it that we didn’t find them take a stand for a fellow journalist? #TalkToAMuslim about Shireen Dalvi.

A 26 year old, young Muslim writer P Jimshar from Kerala was attacked by his own fanatical community members. Reason being, he allegedly insulted God (Allah) in the title of his new collection of short stories. He was assaulted in public by a man named Jaffar and 3 other unidentified men. He clarified that the story had nothing to do with God, and that the title for which he was assaulted was one of the nine stories in the book. He also told the police that there were a large number of threatening messages earlier through whatsapp, as per a report in The Indian Express.

Is the intolerance in the country so high that a young writer can be attacked just for mentioning ‘God’ in his works? No award wapasi in support of this young writer? #TalkToAMuslim about P Jimshar.

In the secular nation of Bharat, a 6 year old Muslim girl Firdosh secured the first position in Bhagavad Gita chanting competition in Kendrapara district, Odisha. This irked the neighbourhood Maulavi and he ordered her parents to pull the girl and her brother out from the school for committing this ‘sin’. As reported in The New Indian Express, Firdosh and her brother were the only Muslim students in that school. Firdosh stood first among 56 students in Bhagwad Gita chanting competition.

It seems like the secular forces only get worked up whenever a Hindu politician declines to wear a Muslim symbol. It is only ‘bigoted and fascist’ Hindus who are intolerant of Islam. But a 6 year old was forced to leave her school because she chanted Gita – how secular is that? #TalkToAMuslim about Firdosh.

Nasima was being forced by the village maulvi and village head to do Nikah Halala in order to ‘remarry’ her husband who had given her triple talaq, Bengali-language daily Anand Bazar Partrika reported. What’s appalling is that Nasima wasn’t even present when her husband uttered talaq 3 times and she only heard about it from other villagers. Yet she had to leave for her parent’s place along with her 2 children.

Why is it so easy for a Muslim man to divorce his wife, and on top of that to demand that she let herself be raped by another man (usually, a relative or the local maulvi) before he remarries her? Are there no constitutional rights for Nasima? #TalkToAMuslim about Nasima.

Neighbours and Samajwadi Party (SP) supporters thrashed Zahid, a Muslim BJP supporter and his family in Islamnagar, Bijnor. Post SP’s victory in the MLA by-election, he had objected to their loud celebrations in front of his house, as reported in Amar Ujala. SP supporters Saddique, Salim, Aabeed, Saleem, Zareef, Rahees, Haseenu, Shahid, Iqrar started abusing and beating him. Zahid’s wife , daughter-in-law, son and daughter were also beaten. The attackers also vandalized his house and stole his valuable possessions.

If a Muslim is a BJP supporter, brainwashed members of his own community get a free hand to beat him! #TalkToAMuslim about Zahid.

Nineteen-year-old Luqman Pasha was killed by his own radicalised Muslim friends because he refused to join the radical Islamist group, Tablighi Jamaat, which follows the Deobandi school of thought. But alas, Luqman’s case was not ‘news-worthy’ for our MSM, since his murderers were ideologically-motivated Muslims, unlike the murder of Junaid Khan by a Hindu following a disagreement over a train seat.  #TalkToAMuslim about Luqman Pasha.

These are just a few among many such cases that take place around Bharat. This is the real discussion that should be happening with Muslims, whose true enemy lurks within.