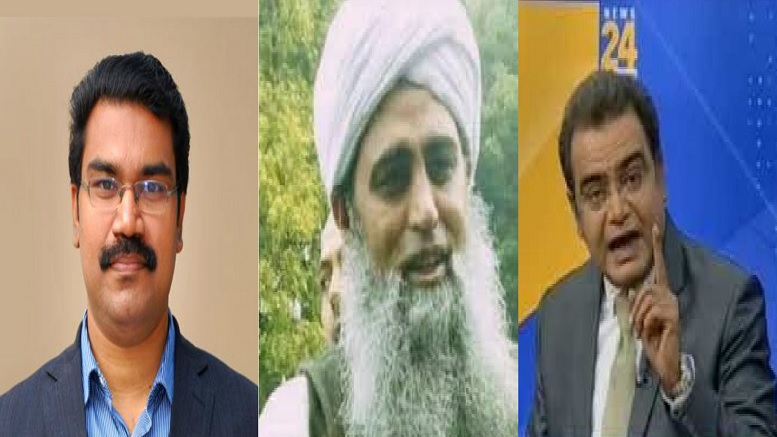 Jihadi penetration into what is called ‘unbiased journalism’ threatens media reporting in Bharat. It’s an open threat that if you publish, show or follow up on huge Jihadi crimes we will squeeze you of advertisements and ruin you gently. The fear of censorship has worked wonders and not a single media house cared to inform us masses about the suppression that their fellow journalists were facing.

The only report came from a UAE-based media house owned by a Pakistani national based out of Karachi. All media houses in most Arab countries are partnerships between the state (usually monarchs) and the investor. Most also will have at least one local resident close to the ruling regime and several of their cronies on the board and its editorial.

This local daily newspaper said that Tablighi Jamaat, the transnational Islamic missionary movement was branded the super spreader of Corona, at the outset of the viral outbreak in Bharat by these three TV news channels. More than the news they glorified the virtues of NBSA. They mentioned the NBSA as an Apex body but the only Apex body in Bharat, especially in such matters is the Supreme Court.

Incidentally, the original ‘complaint’ against these media houses filed with the NBSA was received from a shady Bangalore-based organization called Campaign Against Hate Speech (CAHS) in 2020. CAHS tried its best to whitewash the crimes of the Tablighis ever since it began. What made the ‘Apex’ NBSA decide in Tablighi favor should be debated.

NBSA is an ‘independent body’ filled with members from leftist journalist trade unions with anti-national or PFI agendas. For example, ‘rebel’ News24 ‘journalist’ Sandeep Chaudhary who in January, claimed on TV that he would not get vaccinated against Coronavirus with the made in Bharat Covaxin but by April cried foul when there were rumors of the vaccine being charged 400 per head adding that he wanted his for free.

Another one is Asianet News Prasanth PR (Prasanth Reghuvamsom) an active member of the Kerala Union of Working Journalists (KUWJ) headed by none other than the now infamous Siddique Kappan. Prasanth still cares for Kappan and flashes news as and when they happen in an otherwise dull life inside Tihar Jail. Prasanth also has a history of inciting riots by airing fake news of mosques being destroyed during the recent bout of Delhi violence.

The Press Club of India supports the demand of the Kerala Union of Working Journalist seeking proper and adequate treatment for Siddique Kappan, who is infected with Covid-19 in jail pic.twitter.com/O5Afti119Y

The NBSA in its ‘order’ said, “The tone, tenor and language [of the programs] was crass, prejudiced and disrespectful. The programs were prejudiced, inflammatory, and crossed all boundaries of good taste without concerns for feelings of a religious group. It was aimed at promoting and inciting hatred between communities.”

If one remembers the incident, the above-mentioned evils were all involved in the Tablighi jamaat incident, one that was responsible for carrying the virus to distant parts of Bharat by violent Muslim foreigners. All that the local media did was uniformly show the nation what these criminals were up to. All of them belonged to a specific religious group that disrespected the laws of the land and indulged in acts that were not entirely in good taste. More importantly, they had endangered our country’s safety.

Back in March 2020, the government of Bharat ordered total lockdown and that is when believing the sermons of their cult leader, Maulana Muhammad Saad Kandhlawi, these Jamaatis went berserk. He said that Allah’s true believers should not fear Coronavirus, that the pandemic is just a conspiracy to keep Muslims away from congregating and practicing Islam. He added that being kept in quarantine and isolation is a conspiracy against them by kafirs (non-believers).

All-male gangs of Tablighis saw the vulnerability of our nation and unleashed atrocities. They escaped from Delhi in their thousands and instead of going home, they traveled to distant places like Assam and Kerala, carrying and spreading the virus. They used foul language, physically manhandled lady nurses and sexually assaulted lady doctors, stabbed police personnel, and even shot dead a Hindu for criticizing such crass behavior.

They hid for months in mosques. Stories and visuals of them spitting and shitting shook the civilized world. 956 foreigners belonging to 36 different countries were booked in the Delhi Nizamuddin Markaz case where a congregation of 9000 Tablighi Jamaat members had assembled. What began in late March 2020 ended, but by then three months had passed. In June 2020, the Narendra Modi-led administration blacklisted over 2,500 Tablighi Jamaat members and banned their entry into Bharat for the next 10 years. By then the damage had been done.

The media by then had gone soft on the jihadis and later started excusing the Tablighis. The bulk of Saad’s mosque speech that started it all became forged as per our courts. He was summoned for questioning multiple times but refused to publicly appear even once, to date. This clearly shows why and who is winning this diplomatic battle connecting the media, PFI, NGOs paid for from overseas (often hostile) countries, and local courts against Bharat.

Delhi Courts started letting these foreigners leave our country after paying paltry amounts and started blaming the local police, the same ones who had borne a bulk of the atrocities at the hands of the very same Tablighi tormentors. Incidentally, the NBSA also has retired bureaucracy and judiciary amongst its ‘decision-makers.’