Delhi nurse recounts how she was assaulted, PPE kit torn by Tablighi Jamaatis 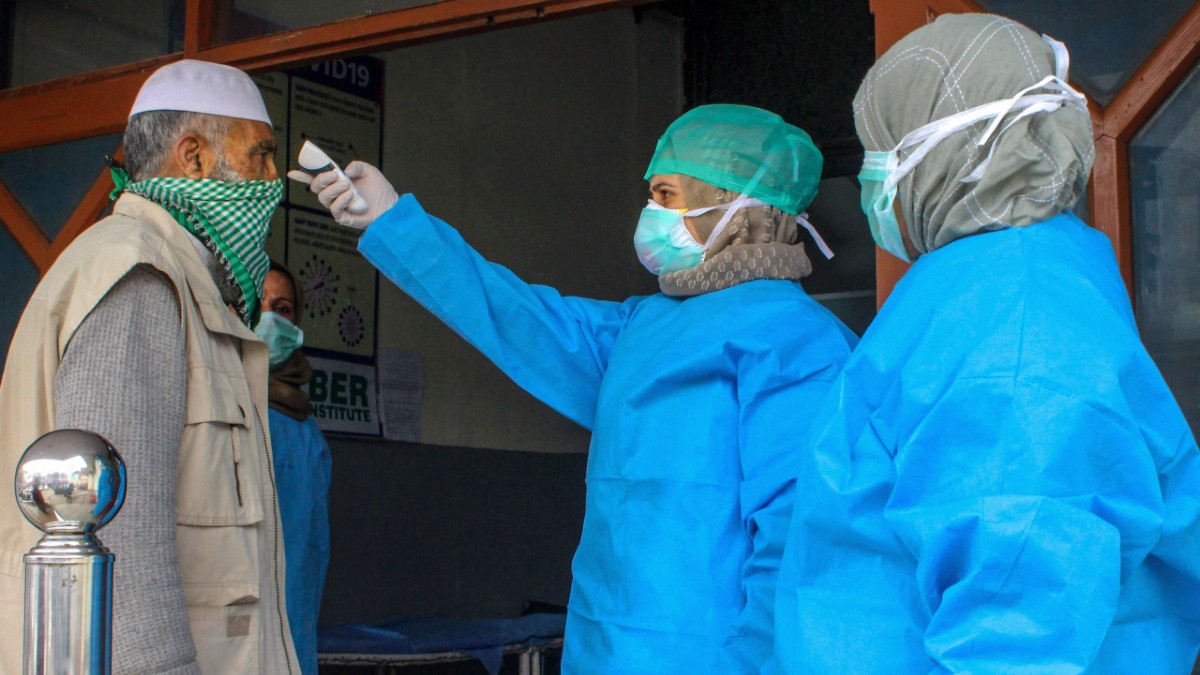 The incidents of harassment of medical staff by Tablighi Jamaat members are not something new, yet there is a strong sense of denial regarding this in certain section of people. They allege that all these stories are somehow cooked up by some media outlets or social media ‘trolls’ to incite hatred against Muslims and that Jamaatis are not at fault.

But this time, a medical nurse has come on camera and recorded her first-hand experience of dealing with Jamaatis under her care. The nurse who is posted in an isolation ward at LNJP hospital at New Delhi was interviewed by an India TV reporter and she described her ordeal with Jamaati patients in detail. Her testimony, based on her direct interaction, gives us a better insight into the problem.

English translation of Nurse’s interview (both of above videos) –

Nurse: They (the Jamaati patients) said this is bad food, it’s cold, they tried to force me to eat it, and tore my PPE kit.

Reporter: Which quarantine centre are you talking about? Tell us exactly what happened.

Nurse: I am talking about this (LNJP) hospital. They are all Mohammedans, from the Jamaat. But not the foreign Jamaatis. They did not like the food, and wanted me to first have it. 15-20 of them tried to catch  hold of me, and I pushed away the food cart and ran out of there. They caught hold of my kit from behind and tore it. I reached out to a doctor for help and lodged a formal complaint.

Reporter: Has any action been taken against those patients?

Nurse: Nothing has happened till now. I have complained to the CMO (Chief Medical Officer) as well. I am still feeling bad. I used to think earlier that they (media) are deliberately showing them (Jamaatis) in a bad light; it can’t be true. After all they are also human beings. But now I have realised that it is really true that they would have spat and would have urinated as well; these people are not trustworthy. At least I can not trust them any more.

Reporter: So did you feel bad when they started physically attacking you over food, and did they catch hold of your neck to force you to eat that food?

Nurse: Yes, they tried to catch hold of my neck and tried to force my head into the food. I somehow escaped but they caught hold of my back (and tore the PPE kit).

Reporter: Did you feel bad that people belonging to a Jamaat are behaving like this?

Nurse: Sir, I really felt very bad. I am a strong person and I am able to help myself but there could have been some other nurse. Do these Indian Muslims feel any shame? At least they could have thought that since we are eating for so many days, why to fight with a woman over such a thing. Or in case they did not like the food, they could have simply refused it.

Reporter: But you were taking good care of them. Isn’t that true?

Nurse: Sir, although its inappropriate to brag about the donations you make, God Almighty is watching it all. But apart from whatever food is available, I have helped them with my personal finances as well. There were a few Indonesian Jamaatis who said they are not able to get tea for quite some days. For them I purchased sugar, tea leaves and made arrangements for them to make tea for themselves in our (staff) room. They never said a bad word to me.

Reporter: Do you feel bad that the same Jamaatis who were being taken good care of by you were the people who behaved badly.

Nurse: You see. What can be done?

One thing that should be noted, lest someone accuses the nurse of “Islamophobia” or being biased against Jamaatis, is that she has not complained against Indonesian Jamaatis who are part of the same group of patients. She has pointed out only the local Jamaatis and it is as if local Jamaatis have been taught to be adamant and non-cooperative with authorities. There have been a number of cases where coordinated attacks with criminal intent have been used against health care workers across the country by Jamaatis or their supporters.

In the same LNJP hospital, one Jamaati patient started hurling abuses and passed vulgar comments on a female resident doctor on duty. And when the doctor accompanying her objected, the patient gathered other patients of the ward and started threatening the doctors and the staff on duty. In a Ghaziabad hospital, Jamaatis allegedly roamed around nude and made vulgar signs and misbehaved with nurses and medical staff. Some attendees of the Tablighi Jamaat event who are being held in a quarantine facility run by the railways are said to have spat at doctors and misbehaved.

The situation of health workers is grimmer outside the confines of hospital. Out there, they are being subjected to violent and potentially fatal resistance by Jamaat supporters.

Medical professionals, including two lady doctors were attacked in Indore with stones, while in Padarayanapura ward in Bengaluru, medical professionals and police were thrashed by a mob for quarantining Covid suspects as recently as 20 April. In Moradabad, where stones were pelted at doctors and policemen, SSP Muradabad has confirmed that the attack was a planned and coordinated one.

In view of such potentially catastrophic events, a common citizen is bound to ask why Jamaat members are attacking our ‘first line of defence’ against Corona pandemic. Is it just a series of knee-jerk reactions by individuals to the turmoil that corona has brought in its wake, or is it a much deeper malaise that is making such people systematically derail our system and administration, giving a window to chaos. Only time will tell.

Jawed Habib spits into woman’s hair during a training seminar, listen to the lady’s response