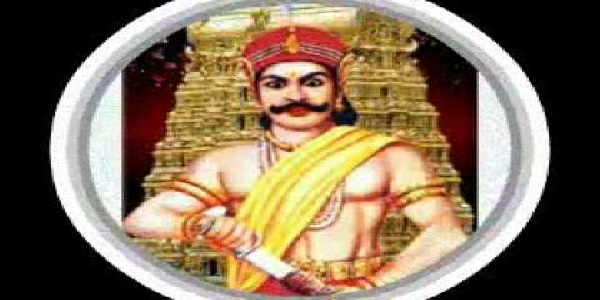 Veerapandya Kattabomman, one of the great freedom fighters and revolutionaries, who was a terror to the British, with his lightning raid tactics and stubborn resistance.

Panchalankurichi is a small village located in Tamil Nadu’s Thoothukudi district. It gets its name from the fact that 5 Pandya chieftains or Pancha Pandyas put up a brave resistance against the Madurai Nayaks in a valley (Kurichi) nearby. The place was founded by Jaga Veera Pandya, when he saw a hare giving chase to the hounds, and considered it a land of great valor. Known for their bravery, and resistance to invaders, this place would witness the birth of one of its greatest sons on January 3, 1760, who became an icon of resistance to British rule, and inspired a generation of freedom fighters. 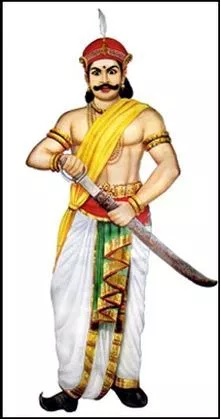 His ancestors originally belonged to Andhra Pradesh, and migrated to a village in Tamil Nadu called Salikulam.  Belonging to what was called the Thogalvar community, they were skilled fighters, known for their stubborn never say die attitude on the battlefield. Kattabommu, was a Chief Guard to then Pandya ruler Jaga Veera Pandian of Veerapandiyapuram (currently Ottapidaram), which also accounts for their name. Loyal, devoted and known for his bravery, Kattabommu gained the confidence of the Pandyan ruler.

With no male heir to succeed him, Jagaveera Pandyan, crowned Kattabommu as his succesor, who named himself as Jagaveera Pandya Kattabommu, and later founded the town of Panchalamkruchi.  He built a fort here with a 12 feet high wall, and 500 feet length, 300 feet breadth, made of black clay, mixed with straw or paddy. Surrounded by thorny bale bushes, the fort was considered quite impregnable and could withstand any form of attack.

Veerapandya Kattabomman, was the 47th in the line of Kattabomman dynasty rulers, the eldest son of Jagaveera Pandya and Arumugathammal. He had two younger brothers Omaithurai, Thuraisingam and two sisters Easuvaravadivy and Thuraikannu. Crowned as the ruler on February 2, 1790, when he was thirty years old, he proved himself to be a wise and capable ruler. Maintaining good relationship with the neighbouring chieftains, he was ably served by his generals Vellaiathevan and Sundaralingam. A devotee of Murugan of Tiruchendur and Jakamma, he had constructed 45 bell towers between Panchalamkurichi and Tiruchendur, that would convey the pooja time, in a relay system. Also a great patron of arts and music, he generously donated to many scholars, musicians, dancers.

During that time the East India Company had established itself at Fort St. George in Chennai, for trading. In reality they were slowly establishing their rule over Bharat, through a policy of divide and rule. More often they not struck deals with Bharatiya rulers, ensured they were in debt to them, and had to act as per their bidding. One such ruler was the Nawab of Arcot, who ruled over a larger amount of territory in Tamil Nadu.  With the Nawab in full debt to the British, during 1781, the British demanded the right to collect taxes from his domain. Though the Nawab opposed the demand, he was helpless, as the British gave themselves the right to collect taxes. The British took advantage of the fact that the Nawab did not have money to pay his soldiers either, and they shrewdly merged his army with theirs.

With the Nawab helplessly acceding to the British request, they slowly began to bring all the rulers of South under their control, using their standard divide and rule tactics. East India Company announced that the Nawab had no authority now, and the Southern rulers were under the direct control of the British. Restrictions were imposed on construction of new forts, or formation of army, in effect the rulers were reduced to plain contractors for the British. Kattabomman was furious at the British skulduggery, and took a pledge to oppose it till his end.

Soon he began to gather all his neighboring rulers- Nagalapuram, Kolarpatti, Kulathor, the Zamindars of Sivagiri , the Maruthu brothers of Sivaganga, a section of the Ramnad royal family, forming a union against the British. The British however successfully managed to wean away most of the rulers, who in turn advised Kattabomman to make peace with the British and abandon his revolt. The British took advantage of the petty differences between the rulers, turning one against each other.  They turned the Zamorin of Ettayapuram, Ettappa Naicker against Kattabomman, who in turn became one of their most trusted allies.

In spite of the repeated presssure, and the British weaning away his allies, Kattabomman stuck to his stand and refused to pay any tax to them. Matter of fact, he intensified his revolt against the British, and received support from the Maharaja of Ramnad.  When the Maharaja was arrested by the British in 1797, Kattabomman, along with his brother Oomathurai,  gathered forces to attack them at Sivagiri. The British took this as an opportunity to trap and capture Kattabomman.

Around the same time in 1798 Jackson took over charge as Collector of Tirunelveli, and he managed to win over most of the local Zamindars and Chieftains to his side. Except Kattabomman that is, who expected a formal invitation. Not surprisingly Jackson was annoyed by Kattabomman’s attitude, and in two letters to him during February-April, warned him that his territory would be seized, if he did not pay taxes. Kattabomman, however ignored those letters, and a furious Jackson ordered his arrest. He was, however advised by higher British authorities to call Kattabomman for talks.

Jackson asked Kattabomman to meet him at Ramanthapuram, which he accepted and proceeded to along with his forces. Jackson, however indicated he wanted to meet Kattabomman alone, more a trap to arrest him. Knowing fully well it was a trap, he nevertheless walked alone to meet Jackson, in the palace, leaving his guards outside. A war of words broke out between Kattabomman and Jackson, over paying taxes, which is when he uttered the famous words:

“Why do we need to pay tax to you? Have you planted the crops, have you watered them? Did you sow them?”

A heated battle ensured between the British forces and Kattabomman’s army in which a officer Clarke was killed, and his minister Thanapathi Pillai was captured by the British.  Kattabomman wrote a letter to the higher authorities asking them to release Pillai, and after an inquiry into Jackson’s high handed behavior, they released him. Jackson was dismissed and sent back to England, and in January 1799, Lousington took charge as the new Collector.

Lousington once again invited Kattabomman for talks, and he gave him permission for his guards to accompany him. He arrived at Ramanthapuram with his full army, and he refused to meet Lousington, unless given a formal invitation. The Collector insisted that Kattabomman must pay tax, through his revenue officer at least. To which he flatly refused and returned back to Panchalamkurichi .  Left with no option, Lousington, wrote to the authorities and recommended war as the only option against Kattabomman.

5th Sept, 1799, the British under Major Bannerman invaded Panchalamkurichi , at a time when all it’s subjects were celebrating a festival at Tiruchendur. Kattabomman, however had advance information of this attack, through his informers, and was ready. Bannerman had earlier asked Kattabomman to surrender to which he defiantly replied:

One of the most pitched and intense battles was fought, with neither side giving an inch. Facing strong resistance from Kattabomman, the British were forced to retreat, and Bannerman, bided his time, awaiting cannons from Palaymkottai to break down the fort. Once the cannons arrived, the fort could not withstand the assault and broke down. Kattabomman lost his able general Vellaiyathevan, while he himself killed many officers in the British Army.  On the last day, an injured Kattabomman was escorted from the battlefield by his aides, and took shelter in the home of the Kolarpatti Zamindar. However, the forces of  Etappa Naicker surrounded it, and once again Kattabomman had to escape. His minister Thanapathi Pillai though was captured, killed at Nagalapuram and his head was placed for display at Panchalamkurichi.

For some time Kattabomman and his men took refuge in the Thirukalampur forest, which came under the Rajah of Pudukottai. Knowing this, the British forced the Rajah to trace him and hand over to them, or else his kingdom would be destroyed. Under duress, the Rajah ordered a search and on Sept 24, 1799 Katabomman was traced out and arrested. Handed to the British, he was sent to Kayathar prison for custody.

The trial began on October 16, 1799 where the British invited all the local Zamindars, in what was essentially a fabricated trial. Kattabomman, refused to surrender, give up on his self respect, and accused the British of illegal, immoral occupation. When the British offered him amnesty, if he asked for a pardon, Kattabomman shot back :

“Do what you want to do, you cowards”.

Finally on October 16th, 1799, from a tamarind tree at Kayathar, Veerapandya Kattabomman was hanged to death. A great son of Bharat gave up his life, he would inspire a generation of freedom fighters and revolutionaries.

On the Punya Thithi (death anniversary) of Veera Pandya Kattabomman, Naman to a legendary warrior and freedom fighter.