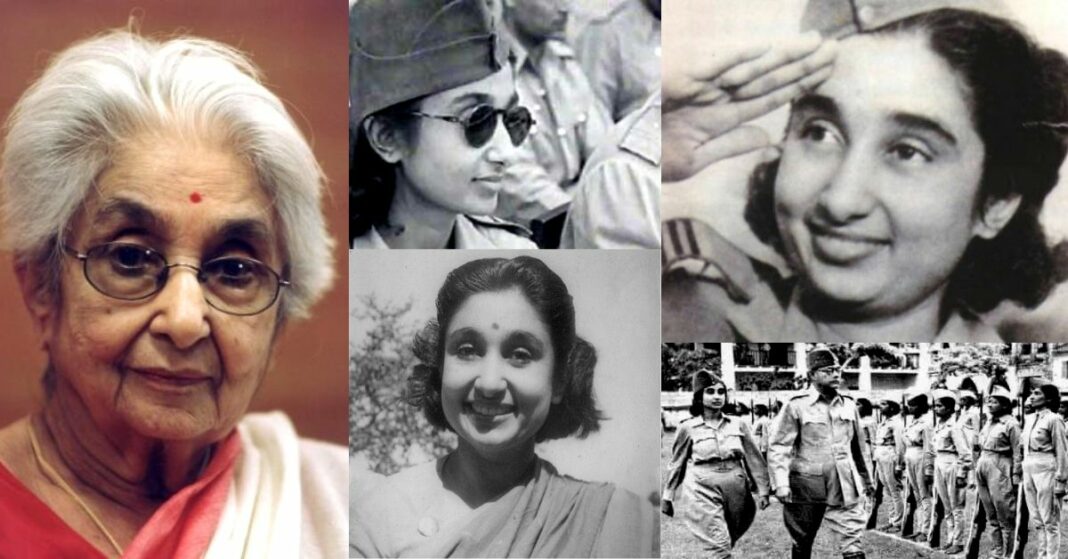 A woman who was the leader of Bharat’s first all-women regiment, a doctor, and a social activist, Captain (Dr.) Lakshmi Sahgal is an inspiration for women of all generations. She was born on 24 October 1914 in the Madras province of Bharat to father S. Swaminadhan, a talented lawyer, and mother A.V. Ammukutty, a social worker and freedom fighter. She passed away on this day, 23 July, in 2012.

Dr. Sahgal studied at Queen Mary College, Chennai, and later opted to study medicine and received an MBBS degree from Madras Medical College in 1938. A year later, she received a diploma in gynecology and obstetrics. She also worked as a doctor in the Government Kasturba Gandhi Hospital in Triplicane, Chennai.

She married Prem Sahgal in March 1947 in Lahore. After their marriage, they moved to Kanpur, where she continued her medical practices.  The Sahgals had two daughters,  Subhashini Ali and Anisa Puri.

“I came from a political family and was interested in the national movement, but I was determined to finish my studies first. I completed studying medicine at the Madras Medical College in 1940. By this time, the Second World War had broken out, and there was a move to recruit all doctors into the (British Indian) Army. I did not want to do that, so I went to Singapore, where I had close relatives. I started private medical practice there. I had quite a good practice. There were a large number of South Indians in Singapore. I had lots of Chinese and Malay patients as well.” Lakshmi Sahgal in My Days in the Indian National Army.

Dr. Sahgal met Netaji Subhash Chandra Bose when he visited Singapore in 1943. At the time, Lakshmi was serving injured people of war. When Subhash Chandra Bose expressed his idea of starting a female regiment, she nominated herself. Netaji took her into his Indian National Army (INA) and made Dr. Sahgal the commander of Rani of the Jhansi regiment.

The magic of Bose’s rallies and speeches awakened a desire among the masses to join the regiment. Captain Sahgal also used a door-to-door approach to convince parents to send their daughters. By 22 October 1943, 156 women and girls from among the Bharatiya communities in Singapore and Malaya from a wide range of ethnic, social, religious, and language backgrounds had joined the regiment, which was part of Bose’s plan to liberate Bharat from British domination.

Captain Sahgal’s contribution to the Bharatiya Independence movement was appreciated by President K. R. Narayanan in 1998 when she was awarded the prestigious Padma Vibhushan. In 2010, she was granted an honorary doctorate by the University of Calicut.

She became the first woman to run for President in Bharat. She contested the 2002 presidential election against Dr. A.P.J. Abdul Kalam as a member of the Communist Party of India (Marxist). Dr. Kalam won the election.

During the Bangladesh crisis, she was the one who called for medical aid for thousands of refugees from Bangladesh who came to Kolkata. She also led a medical team to tend to the catastrophic Bhopal Gas Tragedy victims and worked towards refurbishing peace during the anti-Sikh riots, both of which took place in 1984.

“The fight will go on,” said Captain Lakshmi Sahgal in 2006, sitting in her crowded Kanpur clinic where, at 92, she still saw patients every morning. She was speaking to a young filmmaker from America who was making a documentary on her life.

She died of a cardiac arrest, causing a brain stroke, on 23 July 2012 in Kanpur at the age of 97 after suffering from a prolonged sickness. In her final rites, tributes were paid by political leaders from various parties, activists, school children as well as students from colleges and universities amid revolutionary slogans.

Captain Sahgal’s life teaches us how we should make full use of the lives we get. We will be forever thankful for her contributions.