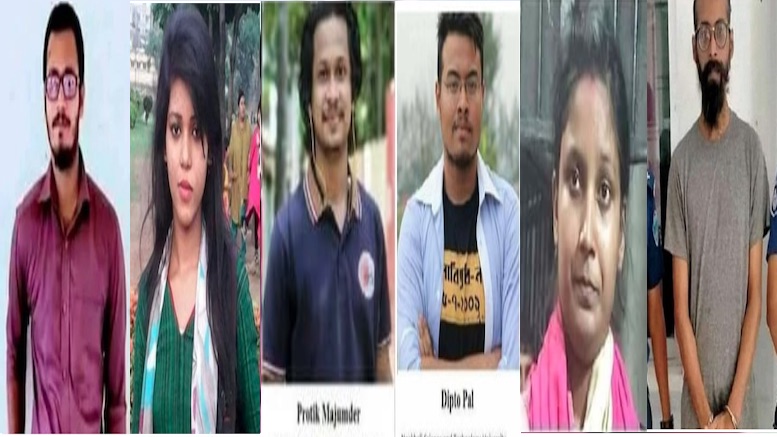 Attacks on Hindus and Hindu Dharma, both in Bharat and overseas, are frequent and unrelenting. In many regions of the world this persecution is like a genocide slowly unfolding before our eyes. For decades, the true depth and breadth of these attacks, driven by disturbing anti-Hindu bigotry, have been ignored by the world. From murders of Hindus to the desecration of temples and murtis, Hindus are facing an increasing assault on their very existence along with an unprecedented Hindu hatred.

In this weekly summary, we hope to provide a snapshot of such crimes and hopefully awaken more people around the world to this human rights crisis:

1) Migrant laborer Kaleem abducted and murdered the 12-year-old son of a former Dalit village head. The incident took place in UP’s Shravasti district. Kaleem’s parents Hasan and Ayesha and his relatives Rabia, Israr Khan, and Tahira were also held. Kaleem was arrested after he received injuries in a police encounter. Police have recovered a countrymade pistol, ammunition, the victim’s cycle, and school books.

2) In UP’s Firozabad, not only was a Hindu youth murdered by a Muslim mob in a pre-planned attack but the entire Hindu locality was threatened by a mob of 15-20 Islamists who threw petrol bombs and opened indiscriminate fire. The incident took place over a trivial issue when Sanjay Gupta, who got injured in the indiscriminate firing along with his son, intervened in an argument between an auto-rickshaw driver and Rizwan to broker peace.

3) In a heart-wrenching incident Kamal Sharma was shot dead outside the ISKCON Temple in Noida by YouTuber Nizamul Khan and two others. As per reports, Sharma was murdered by Khan as he prevented the later from meeting his sister.

4) A temple inscription was defaced by a fanatical Christian evangelist in Tamil Nadu’s Dindigul district who deliberately put up posters with verses from the Bible that degraded devatas of Sanatan Dharma.

5) An Islamist mob attacked and burnt down houses of Hindus in Korbanpur village of the Comilla district in Bangladesh because a Hindu man allegedly expressed solidarity with France in his Facebook post.

6) A Hindu student of Jagannath University Tithy Sarkar facing blasphemy charges due to a FB post and suspended by the university has been missing for close to two weeks now with no information forthcoming regarding her whereabouts and her phone also being untraceable. Apart from Tithy, 5 other students are facing similar charges of blasphemy against Islam based on alleged FB posts.

7) An ancient Hindu temple located in Pakistan’s Karachi was demolished and the murtis of Bhagwans were desecrated and thrown away. According to Pakistani activist Rahat Austin this was the third instance of Hindu temple desecration in a span of 20 days.

8) Houses of Bheel and Meghwal Hindu community members in Sindh, Pakistan had been set afire by Dost Mohammad and others. Pakistani human rights activist Rahat Austin said that these were pressure tactics used by Islamists to force minority Hindus to either trap them into slavery or convert them to Islam.

9) Many Bharatiya states are moving towards a complete ban on firecrackers during Diwali. Rajasthan, Odisha, West Bengal, Haryana, Delhi all have banned sale of crackers during November, citing Covid-19 health concerns. Odisha even restricted sale of diyas (earthern lamps) in temporary stalls to prevent ‘crowding’. Around 700 people have been arrested for bursting or selling crackers in Delhi-NCR during the last 2 years. This follows a pattern of similar restrictions or criticism of Hindu festivities during Dahi Handi, Holi, Durga Puja etc.

10.) 13-year-old Sonia Kumari was abducted by armed men and forcefully converted to Islam in the Sufi shrine of Bharchundi Sharif in Kashmore district, Sindh, Pakistan.

11.) A Hindu family was converted to Islam in Bahraich, UP through false promises of relief from health issues, and sustained brainwashing. The family was brought back into the Hindu fold through efforts of other family members and Hindu organisations.

12.) Andhra Pradesh social welfare department was pulled up the Union govt. for distributing disaster relief money to Christian pastors who were also found to be holding Hindu caste certificates. These pastors were thus illegally taking dual advantage of welfare schemes meant for Hindu SCs (Scheduled Caste) and OBCs (Other Backward Caste) by using their Hindu caste certificates, and government doles to Christians by switching over to their Christian identity.

We request all readers to share other anti-Hindu hate crimes that we might have missed in comments below or by dropping an email to [email protected]. We also solicit support in maintenance of the Hindu human rights tracker database started by us.