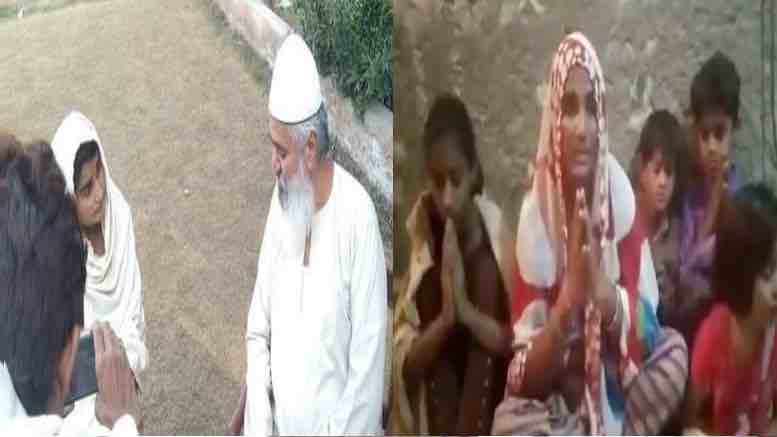 Yet another minor girl from Pakistan’s persecuted Hindu minority has been abducted by the state-sanctioned Islamist mafia that preys on such girls.

13-year-old Sonia Kumari was abducted by armed men a few days back and forcefully converted to Islam in the Sufi shrine of Bharchundi Sharif in Kashmore district, Sindh, as reported by Pakistani human rights activist Rahat Austin. Note: this shrine appears to be different from the Bharchundi Sharif dargah in adjacent Ghotki district managed by the notorious Mian Mithoo who is known for such abduction and forced conversions of Hindu girls.

Sonia’s poor mother, along with her other children, can be seen in a video pleading with Pakistan’s PM Imran Khan and the country’s Supreme Court to recover her daughter.

13-year-old Sonia Kumari is abduct and converted to Islam. Girl’s mother, seen appealing to Government to bring back her daughter.

A video can show you how they suffer.

I have no words what I should say. This is reprehensible

The mother appeals to SP, Kashmore, Wazir-e-Azam (PM) Imran, and the Supreme Court of Pakistan. But her appeals are likely to fall on dead ears, because the Islamist indoctrination of Pakistan is so deep that no politician or public official, in the odd chance that they care, would dare take on the mullahs, especially when it comes to protecting minorities.

Most Pakistanis look upon conversion to Islam as a favor to the non-Muslim being converted, as they believe that non-Muslims will burn in hellfire after death, and only Muslims will get saved by Allah on judgement day. For the same reason, even desecration and vandalism of mandirs, Gurudwaras and churches hardly bothers the Muslim majority, seeped as they are in the notion of Islam’s inherent superiority.

In the small percentage of cases where an FIR does get lodged, the template which follows is thus – the girl is sent to a shelter home; while her family is denied access to her, the abductors (rapists) manage to get through and further intimidate the girl; court hearings witness large mobs of armed men who ensure that the ‘right’ judgement is made; the terrorised girl usually surrenders to her fate and claims she converted to Islam and married her abductor of her own volition; if the girl somehow manages to return to her family, Islamic groups start demanding death penalty for the girl as she is deemed to have apostatised, i.e. left Islam.

In the past, Pakistani courts have ruled that a minor Christian girl’s marriage to a Muslim man was valid as the girl had reached puberty and started menstruating. Recently, the case of 13-year-old Christian girl, Arzoo Raja, ‘married’ to a 44-year-old man gained attention when the Sindh court granted the abductor custody of the minor, ruling that she had married the man of her own “free will”.

Such rulings come despite the ‘Sindh Child Marriage Restraint Act’ which prohibits marriage of those under 18. It is pertinent to note that Pakistan still has not been able to pass a law banning conversion of minors, with both attempts at introducing such a law in the Sindh assembly failing due to complicity of mainstream parties with the Islamist lobby.

A video of Arzoo’s mother wailing for her daughter outside what appears to be a court office, went viral –

In the Pure Land of Peacefuls
Rita trying to meet her 13-year-old daughter, Arzoo, in the court.

Converted to Islam, Arzoo being married to 44-year-old Azhar

Truly, the words of the grief-stricken mother of another Hindu girl, Nasiban (14), abducted in Sindh few months back hold true for Pakistan – “It is a curse to be born in an Islamic country.”