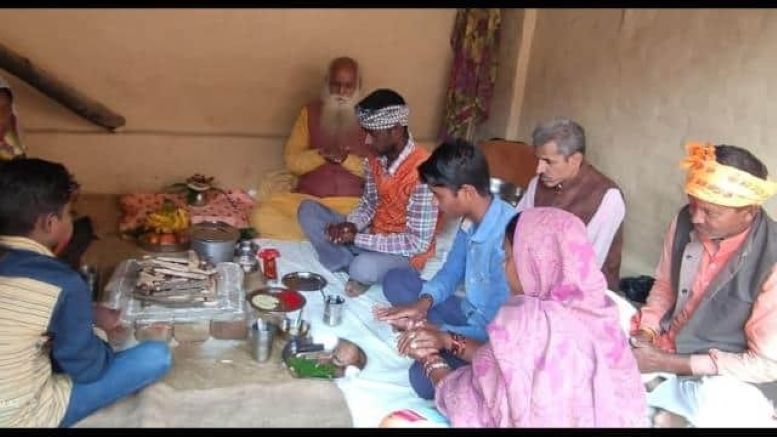 Hindu organizations in Bahraich have erupted in protests after learning that four Hindus have been forcibly converted to Islam in Manjhwa Bhulaura falling under the jurisdiction of Nanpara Police Station. The issue came to light when a senior citizen named Patiram registered a complaint regarding the forced conversion of his son, daughter-in-law, and two other family members.

The complainant has registered a complaint with the police against at least half a dozen villagers accusing them of brainwashing and converting his son, daughter-in-law, and grandson to Islam. He has further stated that initially, he did not suspect anything but since the last few days, he saw his son Subhash, grandson Dipak, and daughter-in-law Mira performing Islamic rituals such as namaz (Islamic prayer).

Patiram tried to reason with his son, however, the latter did not heed his advice and instead assaulted him. Subhash even began visiting the Islamic tomb (mazaar) located in Kamchiyara village along with his family.

The news about Subhash’s conversion spread throughout the village and Hindu organizations reached the village on learning of Patiram’s plight. RSS Dharm Jagran (anti-conversion vigil group) Chief Rohit Chaurasiya demanded action against those who had indulged in the conversion of Subhash and his family.

Subhash’s mother Savitri, sister-in-law Seema and Muna said that the entire family was devout Hindu and that they were distressed with the conversion of Subhash and his family. Police officer Harshvardhan Singh had stated that they were conducting an inquiry into the incident on the basis of Patiram’s complaint.

The family was brought back to the Hindu fold due to the efforts of members of various Hindu organizations including the Vishwa Hindu Parishad (VHP), Bajrang Dal (BD), and Gayatri Parivar in a ghar wapsi shuddhi ceremony this morning. Chaurasiya along with BD District Convenor Dipak Srivastav met Subhash and his family who expressed their wish to reconvert to Hindu Dharma. Accordingly, a ghar wapsi (reconversion) shuddhi (purification) ceremony was conducted by priests from the Gayatri Parivar on Saturday morning.

Speaking on the occasion, Chaurasiya said that they learned from Subhash and other members of his family that Subhash’s wife Mira and their son were lured into reading the namaz (Islamic prayer) and converting to Islam using with the promise of relief from health issues. Their family members and villagers learned that they were even being forced to consume meat.