Hindus under attack: weekly roundup of hate crimes, persecution, and discrimination against Hindus 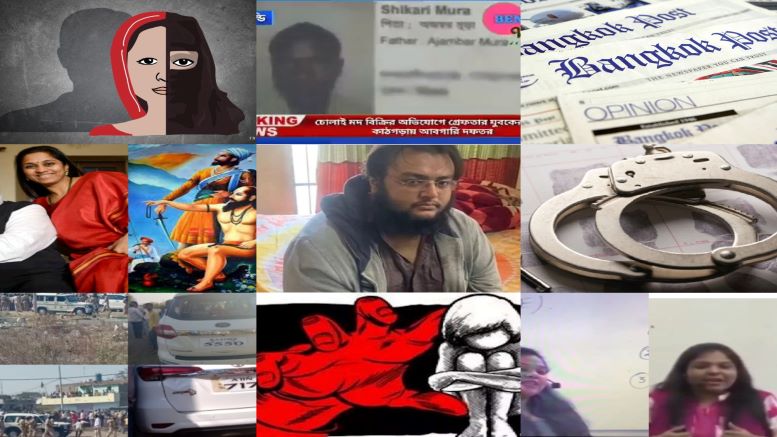 In this weekly summary for the period from 27 February to 5 March 2022, we hope to provide a snapshot of such crimes and hopefully awaken more people around the world to this human rights crisis:

1) As per a Bengali newspaper cutting shared by a Twitter user, three grooming jihadis were nabbed by the state police when they were lurking around the Polerhat High school in the Kashipur Thana area in South 24 Parganas district. The three men have been identified as Rohit Molla, Mahfuz Molla, and Rafikul Ali.

2) Three men hired by fraudster Anees Ali were held for shooting at Dr. Keshav Agarwal in UP.

3) We have seen time and again the insensitivity displayed by the IAS cadres towards Hindus and Hindu Dharma. The root cause of this problem is the training they receive. Earlier, we saw how the Drishti IAS coaching center preached Marxism to its students. Now, it has come to light that the faculty at Vision IAS has been spewing venom against Hindu Dharma and presenting factually incorrect information regarding the Bhakti movement.

5) ‘Secular’ politicians like Sharad Pawar and his daughter Supriya Sule among others have now indulged in new propaganda denying the role of Swami Samarth Ramdas as the Guru of Chhatrapati Shivaji Maharaj.

6) Sharif Sohail from Indore in Madhya Pradesh groomed a minor girl from another community, converted her to Islam, ‘married’ her, raped and impregnated her and their premature baby is now in the government Neonatal Intensive Care Unit (NICU). Astonishingly, Indore police arrested him on February 18, but he was granted bail and went absconding.

7) Reports have emerged of violence breaking out on Mahashivratri day at Ladle Mashak Dargah in Kalburgi District’s Aland. It has come to light that a Muslim mob pelted stones on Hindus and police personnel following which the Karnataka Police have arrested 167 persons, including 10 women in connection with the incident and the district administration has clamped prohibitory orders till Friday. Investigations have also revealed that the violence was planned.

1) A Hindu woman and her pregnant daughter were brutally stabbed to death on Tuesday, March 1, by a man named Al Jobayer in the Nitaiganj area of Narayangunj.

3) Charmonai Pir Syed Muhammad Rezaul Karim, who is a leader of Bangladeshi Deobandi and the second leader of Islami Andolan Bangladesh, converted a Hindu boy into Islam at his madrasa complex, Barishal.