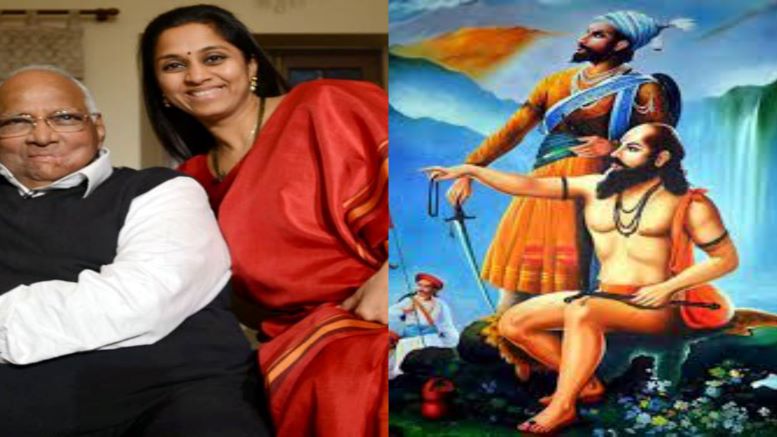 ‘Secular’ politicians like Sharad Pawar and his daughter Supriya Sule among others have now indulged in new propaganda denying the role of Swami Samarth Ramdas as the Guru of Chhatrapati Shivaji Maharaj.

Supriya Sule shared a video of NCP supremo Pawar where he says Swami Ramdas was never the Guru of Chhatrapati and only Rajmata Jijau was. While there is no dispute that Rajmata Jijau was his first teacher as is the case with most children, Swami Ramdas was his Guru – a fact that ‘liberals’ have always been denying in keeping with their agenda to present a ‘secularized’ version of Shivray.

Shivray was guided on several spiritual and political matters by the Sant which is proved by both contemporary records as well as official letters. The Chafal Sansthan received Shivray’s Sanad and the letter written in this regard is an apt reminder of the place that the Sant had in Maharaj’s life and heart.

Even if one were to assume that the respectful address is simply out of his devotion, one cannot discount the fact that there were several exchanges between Maharaj and Swami which shows guidance was sought and given on political and spiritual matters.

However, there has been a concerted effort from the ‘secular’ brigade to whitewash history. Just like ‘liberal’ historians glorify Islamic invaders, they either secularize or totally ignore (when they can’t de-saffronize them) Hindu kings as per their agenda/propaganda. Politicians like Pawar deny the Guru-Shishya relationship for their casteist and minority appeasing politics.

That Pawar is anti-Hindu is all too well-known but he needs Maharaj for his politics and where they fail to secularize, politicians resort to distorting history. What can be a better way of denying Shivaji Maharaj’s Hindu roots than Brahmin-bashing? This is exactly what Congress leader and NCP ally Nitin Raut did earlier when he insinuated that Peshwas caused the downfall of the Maratha empire.

The Maratha reservation politics that is being played out in and fanned by so-called secular parties is the worst form of casteist politics even though Pawar’s daughter claimed she learned caste politics in Delhi. While historically Marathas have been opposed to the caste-based reservation, the seeds for caste-based reservations were sown under the NCP-Congress regime in the run-up to the 2014 elections with the sole aim of drumming up electoral support. That this was a purely political ploy with electoral fortunes is clear from the fact that several commissions set up by the state as well as the central government rejected the demand.

The most important point to remember is these politicians often distort history to suit their purposes and their media and academic handmaidens as well as part footsoldiers leave no opportunity to turn those distortions into facts.