Hindu – all you need to know about its etymology! 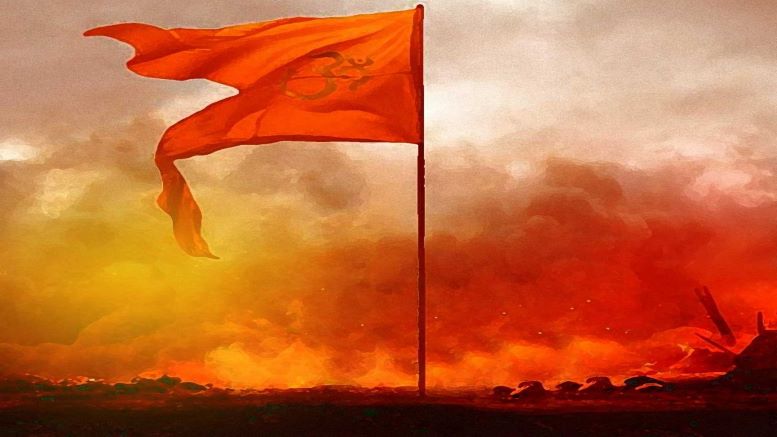 Nowadays there is a tendency to divorce the word Hindu from Bharat’s indigenous society and promote the use of Sanatan Dharma. However, a proper study indicates that this distortion came in due to Muslim intellectuals who twisted the meaning of the word which the Hindu society had been using with pride for several centuries before the advent of the Islamists.

Our ancestors had been using the word Hindu to identify themselves with respect and pride devoid of doubts and any kind of inferiority complex that came to scar the Hindu psyche after the advent of the Abrahamics in general and Islamists in particular.

Islamic distortions of the word Hindu

The distortion of the meaning by Indian Muslim scholars of Urdu and Persian of the term took place in the nineteenth century in the course of compiling Persian and Urdu dictionaries (Llugat). Gayasullugat, Saidullugat, Firozullugat, and  Kareemullugat were the dictionaries compiled in this period.

The Islamists with a biased attitude and crooked mind defined Hindus as Kala (black), chor (thief) and kaffir (non-believer of Islam) in their dictionaries thereby placing a negative connotation on the term that had thus far been used positively by Bharatiya natives.

These so-called scholars deliberately twisted the words of the Persian poet Hafiz who says “Agar aan Turke Siraji badast arad dile maara, va kaale Hindu ash vaksham Samarkand o Bukhara (If that girl of Siraj would bring back my heart to me I would give Samarkand and Bukhara in exchange for her black mole)”.

While the poetic meaning in Persian referred to Hindu as a black mole on a woman’s cheek, in other words, a beauty spot but the Islamists slyly chose only black leaving out reference to beauty. Similarly, the reference to one who steals one’s heart was purposely twisted out of context to mean thief.

That these distortions were the handiwork of Islamists who had nothing but contempt for Hindus and Hindu Dharma is crystal clear from the following pre-Islamic Persian and Arabic references and meaning assigned to the word.

The defensive stance of Hindus

The repeated criticism by Muslim and Christian intellectuals led Arya Samaj founder Swami Dayanand Saraswati to adopt a defensive stance. He was also disturbed by the demoralized and helpless state of the Hindu society in dealing with the Abrahamic assault. He, therefore, took refuge in the Vedas and began defending against the Abrahamic onslaught using his own rationale.

Here lies the seed of attributing the negative connotation given by Islamists to the word as Swami Dayanand had come across the derogatory meaning of Hindu. In the fourth and eighth of his 15 speeches delivered in Pune in 1875, registered his objection to using the word Hindu. He stated that this word meaning black, non-believer, a thief was given to us by Muslims and hence its use should be rejected.

Following this, several Arya Samajis resorted to using Vedic Dharma and Arya instead of Hindu Dharma and Hindu. Further confusion was caused in the society when they began referring to Murti Pujaks as Pauranic in a derogatory sense. The already demoralized Murti Pujak Hindu society then coined the term Sanatana Dharma to defend itself.

To add to this Sants, Sadhus, and Pandits/Acharyas also started distancing themselves from the word Hindu. The Islamists had succeeded in not just causing confusion among the natives but also compelled them to use a term (Sanatan Dharma) that actually has no history and discarding one that had been used with pride by their ancestors.

Additionally, the theories of the “foreign origin” of the word Hindu, and it being of recent origin having no place in the Vedas and Sanskrit literature were propagated to do away with its use.

Origin of the word Hindu

The Vedas state that language is created by the Devas and humans follow and use it. Bhagwan Manu reiterates the same when he says “At the beginning of creation all names and duties (Karma) were created from the Vedas and separated accordingly” (Manu Smriti 1/11).

Similarly, Maharishi Veda Vyas says in Mahabharat’s Shanti Parva “Compassionate Paramatma at the beginning of every Kalpa (creation) gives eternal Vedas which has no beginning and end. In the light of Vedic knowledge, the whole world follows and uses the knowledge of Veda in day-to-day life”.

According to Pandit Yudhishthir Mimansak, who wrote Sanskrit Vyakaran Shastra Ka Itihas, the shlokas of both Bhagwan Manu and Maharishi Vyas have their roots in Vedas (Rigveda 9/95/2 and 10/71/1). It can, thereby, be safely concluded that everything, including names, we use in our day-to-day life today has been sourced from the Vedas.

It has been undisputedly accepted by several scholars that the word Hindu has its origin in Vedic Sanskrit literature’s Sindhu word. Sindhu has been regularly used in the Vedas. The change from Sindhu to Hindu occurs on account of the change of Sa-kar to Ha-kar padadi. Bharatiya language tradition indicates that this change occurs a lot of times and in many places although there are no fixed rules for the same.

The following Mantras from the Yajurveda and Taittiriya Aranyaka are examples of the change from Sa-Kar to Ha-Kar:

As is evident, the Shri in the Yajurveda Mantra has changed to Hri in the same Mantra in Taittiriya Aranyaka. Such changes are based on Sanskrit grammar rules. According to Kasika, a commentary on Panini’s Ashtadhyayi, Nirvachan or changes occur in five ways. They are addition, interchange, by-product, use of words for a different meaning, and loss of letter.

The Sa-kar to Ha-kar change is also noticed in the Prakrit language:

The indigenous Assamese language that has remained untouched by Islamic invasion and the influence of Islamic languages is yet another proof of this change. In the Assamese language, Sanskrit Sa-kar is always pronounced as Ha-kar.

Similarly, people belonging to Rajasthan’s Mewar and Marwad pronounce Sa-kar as Ha-kar. Even in the Hindi poetries of Chatrasal, Surdas, and Tulsidas the padadi change is noticed. All of these provide ample confirmation of the fact that Sindhu is the source and originator of the word Hindu.

The simple answer to the question of why the word Hindu isn’t found in the Vedas and ancient Sanskrit scriptures is the loss of words that have occurred in the course of time. The table below should provide a fair insight into what has been lost.

Use of the term Hindu in pre-Islamic Bharat

Chinese traveler Hiuen Tsang who visited pre-Islamic Bharat used the word Hindu to refer to Bharatiyas. In this regard, Thomas Watters, who translated Hiuen Tsang’s Chinese memoirs into English, writes “We find that different counsels have confused the designations of T’ien-chu(India); the old names were Shen-tu and Sien (or Hien)-tou; now we must conform to the correct pronunciation and call it Yin-tu”.

“The names of India (T’ien Chu) are various and perplexing as to their authority. It was anciently called Shintu, also Hien-tu; but now, according to the right pronunciation, it is called In-tu. In Chinese, the name signifies the Moon so it is called In-tu”, notes Samuel Beal, another translator of Hiuen Tsang’s works.

This is yet another confirmation of the fact that Sindhu and Hindu were used in reference to Bharat. Not just foreign travelers but also Bharatiyas themselves used the word Hindu as seen in several ancient texts.

It cannot be emphasized enough that the word Hindu is a Swadeshi word that originated in Bharat and its use is pre-Islamic. As mentioned earlier its source is the Vedic word, Sindhu. Veer Savarkar explains the etymology beautifully.

It must be mentioned here that Mahabharat states that there are two Sindhu rivers and two Sindhu provinces – one in western Bharat and the other in eastern Bharat.

Maharana Pratap, Chhatrapati Shivaji, Guru Teg Bahadur, Guru Gobind Singh, and several others fought for Hindu Dharma, they defended Hindu Dharma and sacrificed their lives for Hindu Dharma. No one used Sanatan Dharma, Vedic Dharma, Bharatvarsh, and Bharat Mata in their course of fighting, defending, and sacrificing. In their understanding, in spirit, the word Hindu Dharma encompasses all.

In view of all these facts, it is time to let go of any apprehension and walk down the path shown by these great champions who fought for Hindu Dharma and identified themselves as proud Hindus. We must live as our ancestors did rather than react to distortions brought in by those with vested interests.

Let us take pride in being a Hindu and make our ancestors proud!