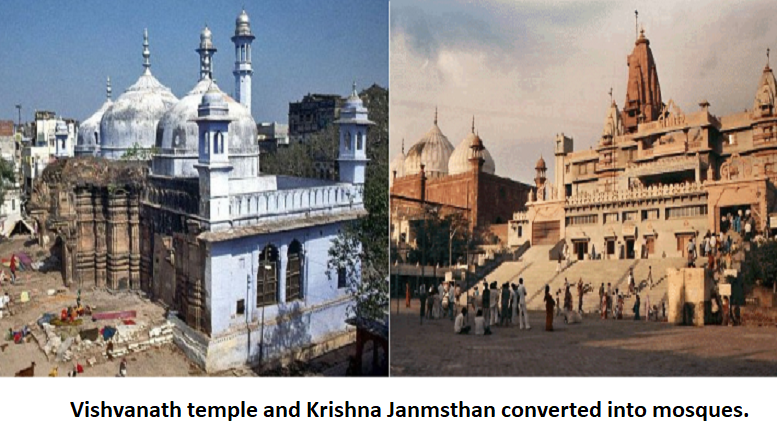 Last week, Turkey’s Islamist President Erdogan declared that Hagia Sophia had been converted into a mosque. A court ruling allowed the conversion of the site from museum to mosque.

Journey from Pagan site to Mosque

Almost all the narrative on Hagia Sofia is focused on how it was a Church built by Byzantine Empire, also known as Eastern Roman Empire, and appropriated by Muslim Ottoman Turks. All Christian leaders, including Pope, have issued statements to this effect.

According to this narrative Church of Hagia Sofia was built by Byzantine Christian Emperor Justinian in 537 CE. It is the epitome of Byzantine architecture. Before the Muslim Ottomans, it was also desecrated and looted by Roman Catholic Crusaders from Europe in 1204.  When the Ottomans conquered Constantinople in 1453, it was converted into a mosque. The Christian features like bells, altar, iconostasis, and other relics were destroyed and the mosaics depicting Jesus, his mother Mary, Christian saints, and angels were eventually destroyed or plastered over. Ottoman Turks also added the minarets for azaan.

After Mustafa Kemal Pasha captured power, it was converted into a museum in 1935 after Turkey was thoroughly secularized. Even today, it is one of Turkey’s most visited tourist sites.

What is not realized and mentioned is that Hagia Sophia was originally a pagan site.

Hagia Sophia- once a pagan worship, then a Roman, a Cathedral, & a mosque. Kamal Ataturk made it a museum in 1933. pic.twitter.com/G9Ck4Hf8TK

The first Hagia Sophia (meaning ‘Holy Wisdom’) church was built on the site of a Pagan Temple in 360 CE. It was destroyed and rebuilt many times and the current version was built during reign of Justinian in 537. For the construction of Hagia Sophia, old pagan idols and edifices were plundered and the remnants can still be seen there. Indeed, some of the architects of Hagia Sophia were also pagan.

To understand the gradual suppression and destruction of Europe’s pagan, polytheist religions, there can be no better book than Catherine Nixey’s “The Darkening Age: The Christian Destruction of the Classical World” which HinduPost has reviewed in an earlier article.

A Pagan holy site was thus converted into a holy site of first the Christians and then Muslims. Let us see what are the arguments of Muslims in converting Hagia Sophia into a mosque.

Despite angry statements from Eastern Orthodox Church authorities of Russia and Greece and disapproval from UNESCO, Islamists have argued that they are correct in this step. Their arguments are:-

Hagia Sophia is not the sole victim of Abrahamic imperialism. Thousands of Hindu temples in the Bharatiya subcontinent were destroyed by Islamic invaders in the period between years 712 to 1760s. The Christians also usurped Hindu temples, though in significantly lesser numbers. For example, the famous Mylapore St. Thomas Church was built on a Shiva Temple.

After 1720s, wholesale destruction of temples was stopped by Marathas. But such incidents continue to this day in Bangladesh and Pakistan. We have recently seen how an under construction Hindu Temple in Islamabad was defiled by Muslims and Hindus threatened with genocide just last week. The British colonials also generally refrained from destruction of temples and were more interested in control over them.

Unfortunately, Marxist historians have avoided discussion on this. One can read “Hindu Temples – What Happened to Them” by Sita Ram Goel, Arun Shourie, Harsh Narain, Jay Dubashi and Ram Swarup. This monumental effort details 2000+ temples, converted into mosques, with inscriptions and quotes from books of Muslim historians. By the writers’ admission, it is just the “tip of the iceberg” and thousands of more temples remain buried under mosques.

Indeed, barring a few minor exceptions, in the whole plains of UP and Bihar, there is not a single temple building older than 300 years, while in Tamil Nadu, Kerala, Andhra, and Karnataka, thousands of villages have thousand-year old temples. The credit goes to Vijayanagar Empire which protected and rebuilt many temples after conquering these lands from Muslims.

The most famous and venerated places of Hindus in north Bharat were repurposed as mosques. It includes sites of Kashi Vishvanath and Mathura Krishna Janmbhumi. Ram Janmbhumi was also destroyed, and Babri Masjid erected over it. They defiled Meenakshi-Sundereshwar temple in Madurai and Jagannath Temple in Puri too. In a moment of rare determination, Hindus took back Ram Janmbhumi and by the grace of God, a temple is being constructed there now.

The history of Christianity is rife with appropriating Pagan sites, concepts and festivals and incorporating the same in Christianity. Islam starts with capturing Kabba and removing/destroying the murtis from the temple to convert it into an Islamic site. They banned all non-Muslims from entering Mecca and the ban stays till date.

This pattern of capturing and converting sites of other religions to Abrahamic sites has remained a key feature of Christian and Muslim conquest everywhere. Pagan temples including Hagia Sophia, Temples of Mayans and Incas and Hindu temples all have been victims of this imperialism.

In Bharat, the holiest sites of Hindus, Kashi and Mathura are under occupation of Muslims. Even a casual visitor can see that these are built atop destroyed temples.

It is time that this Abrahamic imperialism be given a befitting reply. Hindus everywhere should now make efforts to reclaim the ‘lost temples’. All temples converted into mosques, for which proof are available, should be demanded back. After all, Islamists cannot have it both ways! They cannot say “We conquered Hagia Sophia and Hindu temples by sword, thus we own these places” and then cry victimhood when Hindus recover their places of worship by force!