“Kill all Hindus!” to “Power of Enemy”- Hinduphobia is real and growing 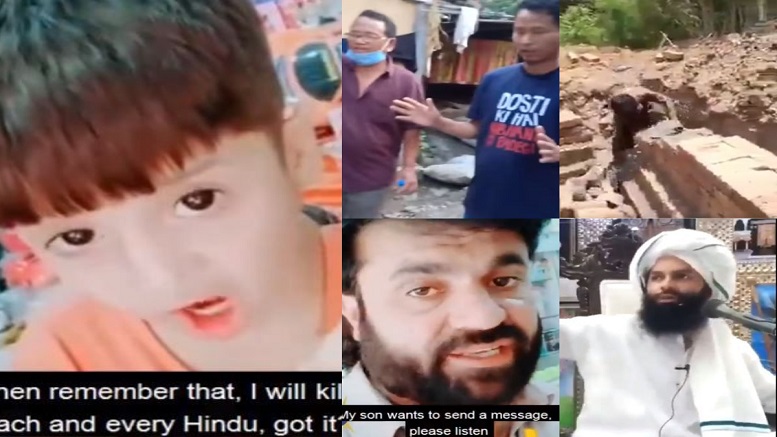 The events of this week have shed a new light on Hinduphobia ingrained in the Abrahmic religions of Islam and Christianity. While, in Pakistan, the issue of Islamabad Hindu Krishna temple, which included Islamist threat of “Kill all Hindus!”, exposed the bigotry of common Pakistani Muslims, in Bharat, a Christian Pastor in Arunachal again showed why Christianity is a big threat to culture of Bharat and indigenous religions of Bharat.

We have already discussed Islamabad temple issue in some detail, here and here

Since we wrote our last post about the issue, the inevitable has happened. Islamists have, in the meanwhile, destroyed the foundations of the under construction Hindu temple and declared that they will slaughter a cow there on the occasion of Bakrid. Needless to say, it is an ancient way of Islamists to show dominance and insult Hindus.

Muslims know that cow is sacred to Hindus and have used cow meat to desecrate Hindu temples since centuries. Indeed, this was used by Islamist invaders to humiliate Hindus. In the first Islamic invasion itself by Muhammad bin Kasim, in 712 CE, he destroyed all temples but let Surya Temple at Multan stand as it generated much revenue. But, he killed a cow and attached a piece of cow flesh on the neck of Murti of Lord Surya! This pattern was repeated countless times. The use of cow flesh to defile Hindu temples was used even by the ‘Great Secular’ King Akbar in Nagarkot(Kangra) Jwalamukhi temple!

Cougaratulations to all Pakistani Muslims who once again saved Islam by demolishing boundary wall of 1st and only Hindu temple in Islamabad. This wall was build with donation of Hindu community. A group have announced that they will slaughter cows on temple site on Eid-ul-Azha. pic.twitter.com/atwqeyhdjP

This act of vandalism was not the only one at the site. As we covered in this piece, Lal Chand Malhi, a Hindu member of the National Assembly of Pakistan has reported that there have been four different acts of robbery and vandalism at the site in last 1 week. Indeed, yesterday the miscreants stole about 1 ton of iron, for use as construction material, from the site. Read his tweet below:-

Even after suspension of construction work at #Kirshna #temple #Islamabad site and admin's assurance that #police has been posted there, unknown accused overpowered security guard and took away about a ton of iron last night. This is 4th time of trespass and vandalism/robbery. pic.twitter.com/ePuvlUUo3E

“Kill all Hindus !” -Maulvis to Muslim kids, the same slogan

The Hinduphobia in Pakistani Muslims can be seen from the way their religious heads and common men talk about Hindus. Not satisfied with vandalism and offering namaz at the site of temple, or even by threat of defiling it with cow slaughter, a Maulvi threatened that he will kill all those in support of Krishna Temple in an Islamic country and feed it to the dogs!

Muslims of India! Please listen, how your brothers are treating minorities under their jurisdiction. Feel previleged bcoz you are in India. Even factional Muslim minorities like Shias are too, not safe in 🍌Banana Republic 🇵🇰 pic.twitter.com/2uQowcrkVl

Such threats are not to be taken lightly in a country like Pakistan, which is the breeding ground of terrorists. Indeed, the shouts of approval from the audience confirms the level of dangerous Islamic radicalization in Pakistani society. As if this was not enough, a new video has come up in which a small child is heard making a threat to kill all Hindus if Hindu Temple is permitted in Islamabad.

Pakistani father makes his son utter hatred towards Hindus and threatens violence if a Hindu Temple permitted in Islamabad. Check out the pride in the father’s eyes. Shocking.
pic.twitter.com/Myy6Kh0aB4

It is to be remembered that similar videos of Hindu hate by children have often been released by Kashmiri terrorists. Many readers will recall the video in which a Muslim child is saying “I will kill Modi” at the airport, after Modi’s govt brought the family home! Of course, this is a result of deep seated Hinduphobia among Muslims, which is passed on to the next generation of the family.

If the Islamists are abusing, threatening and denigrating Hinduism in Pakistan, Christian fundamentalists are doing it in Bharat itself. The missionaries routinely abuse Hinduism and Hindus. Gandhiji described in his autobiography, My Experiments With Truth, : “In those days Christian missionaries used to stand in a corner near the high school and hold forth, pouring abuse on Hindus and their Gods.”

Swami Vivekanand asserted in the Parliament of religions : “If we Hindus dig out all the dirt from the bottom of the Pacific ocean and throw it in your faces, it will be but a speck compared to what your missionaries have done to our religion and culture.”

Clearly, abusing Hindus, declaring their Gods as demons, conversion through coercion and fraud and spreading rumors about Bhartiya culture and society is an old business of fundamentalist Christians.

The business continues even today. Watch a sample below:-

Andhra pastor abuses Hindu gods, Hindus calling them "you are leading neech life since 2000 years,cheating and telling lies.Congrats to all AP Hindus for screwing up your own dharma. You are power less,helpless. Sit back and suffer under Kingdom of God led by Jesus 😡😡 pic.twitter.com/iRIasmp7Jn

This is not an isolated event. Missionaries are now bold enough to enter our temples and target Hindus there. Has any Hindu ever gone to a Church and abused their God and asked them to convert?

When a local confronts as to why do they enter Hindu temple to preach Christianity, she says, "If you want you take, otherwise say NO"!

Of course, Christianity does not have problem only with Hindus. They oppose every native religion and try their best to erase any sign of that. They destroyed European Paganism, African, Australian and American religions and have been trying to destroy Hinduism since hundreds of years. A recent example from Arunachal Pradesh can be seen below.

The Christian pastor is abusing and burning the Murti of Mother Goddess, Ane Donyi of the indigenous Donyi Palo religion. He is calling it “Power of enemy”, and burning it in the name of Jesus. He was bold enough to post it on social media. It is to be noted that many areas in Bharat’s north east, including states of Nagaland, Meghalaya and Mizoram are now Christian majority. This has happened only in last 100 years. Consequently, local religious practices have now been destroyed.

As Professor P. A. Verguese says:-

Hinduism I am told believes in universal values and is not obsessed with God. It projects divinity within. No hatred to any religion. There is no Kafir or infidel & its scriptures don't demonize them. But Muslims & Christians do. Let us respect all regardless of their religion.

The respect and tolerance for other religions that is present in Hindu Dharma is a unique trait. Due to the invasive tendencies of Abrahmic religions, this trait will become less and less common. Maybe, that is necessary for our survival.

It is time that the expansionist designs of Islam and Christianty are exposed to every Hindu. The amount of Hinduphobia in these religions should be talked about in media, in stories, should be shown in movies and should be openly told in public conversation. Unless we win the narrative war, Hindus would continue to be portrayed as bigoted and our persecutors will continue to falsely show themselves as persecuted, while continuously preying on us.

Did you like this article? We’re a non-profit. Make a donation and help pay for our journalism. HinduPost is now on Telegram. For the best reports & opinion on issues concerning Hindu society, subscribe to HinduPost on Telegram, Facebook and Twitter.