Attack on temples continues- Murtis vandalised for the fourth time in Perambalur, TN 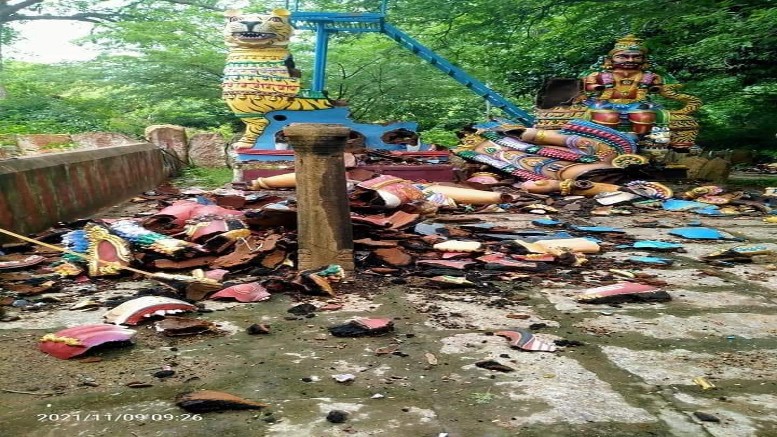 After three consecutive attacks on temples in Perambalur, Tamil Nadu, the deities in a temple have been vandalised once again. Despite the continuous attacks police have failed to nab the culprits and the atheist DMK government has turned a blind eye.

The murtis in different temples in Siruvachur, Perambalur are being vandalised by some anti-Hindu elements repeatedly. Karthik Gopinath, a YouTuber who had visited the affected temples and ran a fundraiser revealed that the temples have been attacked once again. On October 5, the murtis of Periya Swamy temple were found to have been vandalised with their heads and hands chopped off.

Some other murtis of the same temple were found in a vandalised state on October 27 as well. In the second incident more than 10 murtis were mutilated including the 20 feet tall murti of the main deity Periya Swamy. On October 7 another temple, Periyandavar temple in the village was also attacked and the stone murtis were vandalised. The temple had been renovated with Rs.10 lakh fund pooled in by the devotees only a few days ago.

All the temples that came under attack are under the control of TNHRCE and are the sub temples of the famous Madura Kaliamman temple in Siruvachur. Perambalur is a hotbed of evangelist activities with VCK, a so-called Dalit party, having hold over the ideological leaning of majority of the district.

Recently another prominent temple in the district faced difficulties from Muslim neighbours. The temple’s chariots were set on fire by a Muslim man. He was later let off by the police with the claim that he is mentally ill. Hindu organisations have been continuously protesting against the government inaction. One such protest received threats from a functionary of VCK. One Natarajan @ Nathan was arrested in connection with the incidents.

DMK owned media Kalaignar TV reported that he confessed to have vandalised the murtis for panchaloha yantras placed under them. He allegedly said that he believed it would bring luck to him. However he was later let off. It is unclear whether he was the real culprit. But the incidents of temple attacks are continuing with no responsible action being taken to stop them.