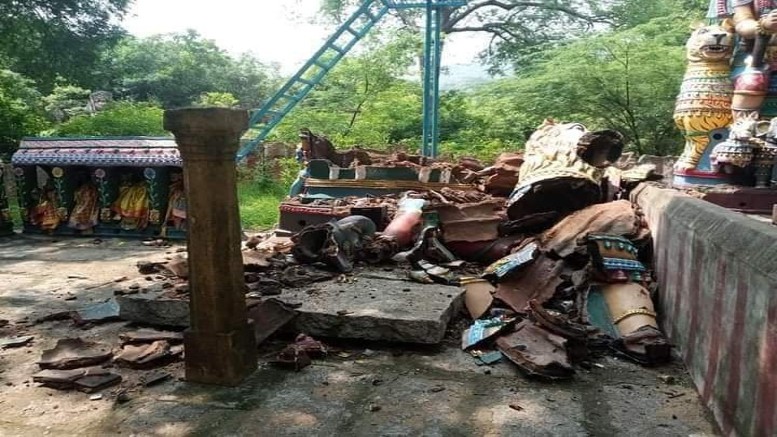 Murtis of Hindu deities have been vandalised for the third time in a row in Perambalur,Tamil Nadu. The murtis of the hill temple in Siruvachur were vandalised in the first week of October earlier. Hindu organisations and devotees condemned the indifference of HRCE and demanded security for the temples.

On October 5, the clay murtis of Periya Swamy temple were found in a beheaded state with their hands chopped off. One Natarajan alias Nathan was arrested but let off on bail after 4 days. Now, other murtis of the same temple have been found in a vandalised state on October 27. More than 10 murtis have been mutilated including the 20 feet tall murti of the main deity Periya Swamy.

Another temple in the village was attacked and its stone murtis were vandalised on October 7. Peria Andavar temple which came under attack was only recently renovated with Rs.10 lakh fund pooled in by the devotees. All these temples are under the control of TNHRCE. Another prominent temple in Perambalur district had also faced difficulties from Muslim neighbours. The temple’s chariots were set on fire by a Muslim man who was let off by the police. They claimed him to be mentally ill.

Despite the repeated attacks HRCE had not taken any action whatsoever to protect the temples. Devotees have been demanding that proper security measures be provided for these temples for a long time. But HRCE hadn’t even installed CCTV cameras even after vandalism. Local devotees and Hindu organisations took a march condemning this indifference and laid siege to the HRCE office. They demanded electricity, night watchman and CCTV facilities for the temples.

Earlier Hindu Munnani had organised a protest condemning the repeated attacks on temples and demanding immediate action to nab the culprits and protect the temples. Before the protest was held Hindu Munnani Trichy in-charge Gunasekaran, the organiser of the protest, received a threatening call from a Viduthalai Chiruthaigal Katchi (VCK) party cadre. He had threatened to hurl petrol bombs at the protesting crowd if it wasn’t cancelled. Gunasekaran had lodged a complaint against him and he was arrested.

Even though the protest was held peacefully, unfortunately the temple was attacked again. The anti-Hindu politics of VCK, a so-called Dalit party is prominent in Perambalur. The chief of VCK, Thol.Thirumavalavan has denigrated Hindu beliefs many times. He even organised a conference titled “Uproot Sanatana Dharma” in 2020 in which the current CM MK Stalin took part and pledged to uproot Sanatana Dharma. Thirumavalavan had also called for destruction of prominent temples like Tirupati Balaji, Chidambaram Natarajar, etc claiming that they were originally Buddha Vihars.