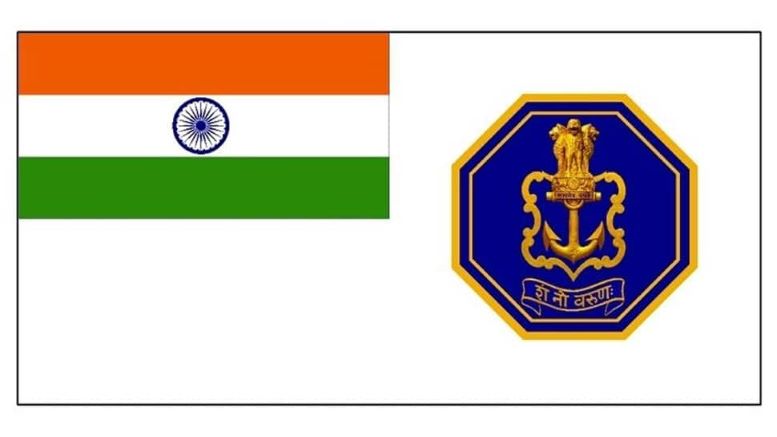 PM Modi unveiled the new insignia (flag/emblem) of the Indian Navy that completely sheds colonial baggage. The new insignia is also a tribute to the country’s rich maritime heritage. “Today on September 2, 2022, we have finally discarded a colonial burden”, the PM said in his address while inaugurating the flag while commissioning the INS Vikrant, Bharat’s first indigenous aircraft carrier. The change is in keeping with PM Modi’s vision of decolonizing Bharat as emphasized in his Independence Day speech.

What is the new naval insignia?

The evolution of the Indian Navy’s insignia

The naval services date back to the colonial era and were renamed the Royal Indian Navy on October 2, 1934. The first ensign of the Indian Navy carried the UK flag on a blue background and carried the symbol of the UK’s Imperial Legislative Council. The prefix Royal was dropped after the country became a republic on January 26, 1950. The flags of Bharatiya defence forces earlier carried the Union Jack which was replaced with the tricolour after Bharat became a republic.

The fourth change took place in 2004 when the Sonia Gandhi-controlled Manmohan Singh government returned to power. The St. George’s Cross was brought back with the national emblem engraved inside the cross.

The St George’s Cross is a Red Cross on a white background that not only has colonial origins but also deep Christian roots. It is named after Christian Saint George who was a crusader in the third crusade.

Earlier, the Christian hymn ‘Abide With Me’ played during the Beating the Retreat ceremony was dropped and replaced with a suitable Bharatiya tune. The change in insignia is in keeping with Bharatiya military’s policy of bringing decolonization through changes in military band tunes, pre-independence war honours, mess procedures, and emphasis on Bharatiya war heroes in military studies thereby indigenizing the armed forces and ensuring a connection with Bharat’s pre-colonial era.

Even though it took eight long years for the Modi government to bring the change, it is appreciable that the country is shedding its colonial baggage and taking pride in its civilization. Bharat has a rich maritime heritage and several dynasties have maintained naval fleets.

Chhatrapati Shivaji Maharaj was one of the few emperors to possess a naval fleet. His navy set forth to encounter the Abyssinians under the command of Mainaik Bhandari and one ‘Daryasarang’ identified by his title alone. In the course of arranging safe anchorages for his navy, Raje strengthened several maritime forts along the Konkan coast.

Mauryas, Pallavas, Cholas, Cheras, Vatapi Chalukyas, and Palas were some other dynasties that had well-developed navies. Raja Bhoja’s Yuktikalpataru is an ancient Bharatiya work that deals with the subject of shipping in detail. Arthashastra mentions large boats with a captain, steersman and servants to hold sickle and ropes and pour out the water.

The naval legacy of Bharat requires a detailed series in itself but suffice here to say that several dynasties have contributed to the country’s rich maritime heritage.