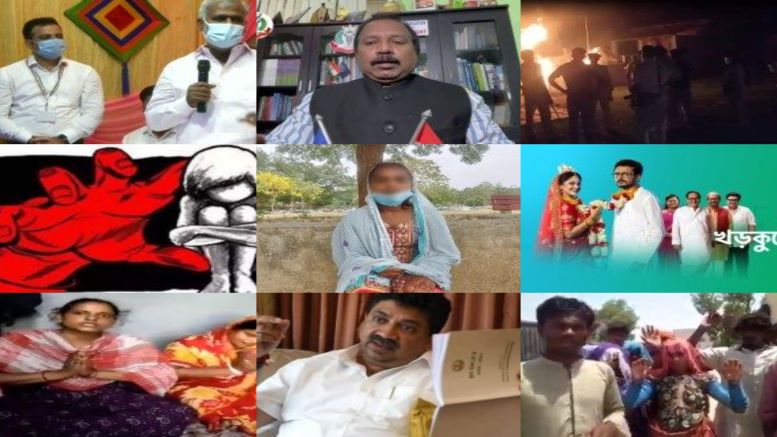 In this weekly summary for the period from 23 May 2021 to 29 May 2021, we hope to provide a snapshot of such crimes and hopefully awaken more people around the world to this human rights crisis:

1) A large Muslim mob attacked a Hindu Mahadalit Basti (colony) in Bihar’s Purnia district on Wednesday night. One man, Newalal Rai, was lynched to death. The mob assaulted women and children as well, leaving at least 10 women injured who had to be taken to hospital. 13 houses were burnt to ashes. A three-year-old child is said to be still missing.

2) Popular Bengali soap ‘Khorkuto’ which garners top TRP is now flowing with a narrative-driven with Love Jihad and legitimizing dhimmitude and Islamic values on Bengali Hindu ethos. Earlier this used to be just another daily serial revolving around joint family relationships.

4) A 15-year-old Hindu girl, belonging to the Jatav scheduled caste community, was targeted by a 20-year-old Muslim youth named Ismail Hussain, who went by the Hindu-sounding moniker Babul, in Dwarka, Delhi. Ismail told the girl he is a kabadiwala (scrap dealer). He kidnapped the minor and took her to Assam in mid-April, during the ‘holy’ month of Ramzan. The real brain behind the crime is said to be a dairy operator named Mehboob Khan who went by the alias Dinesh Chikara in the Dwarka area. The girl’s father Satpal worked as an employee of Khan, and Ismail also worked at the dairy briefly in the past.

5) “Send your wife Pinki to me for few days, then only we will allow you back in the village”, were the words of a local TMC leader, Muzaffar, to the husband of a Hindu Dalit BJP worker in Minakhan assembly constituency area, district North 24 Parganas, West Bengal.

6) After desperately campaigning that DMK isn’t an anti-Hindu party, their leaders are exhibiting their hatred towards specific communities of Hindus for countering their narrative and not voting for them. HRCE minister PK. Sekar Babu’s veiled threat to North Indians living in Chennai for generations is the latest in the list. His speech shaming them for voting for the BJP candidate is on the lines of how Islamists threatened Marwaris in Trichy for funding BJP.

7) IMA has come under fire for its President’s unethical evangelism and anti-Hindu bigotry as well as dubious endorsements. Advocacy organization Legal Rights Protection Forum has filed a complaint with the Ministry of Health and Family Welfare(MoHWF) seeking to revoke the medical practitioner license granted to the Indian Medical Association’s President Johnrose Austin Jayalal who openly confessed his intentions to convert non-Christians in Bharat. It has also sent a complaint to the Home Ministry seeking to cancel IMA’s FCRA license as Jayalal has made it clear that he has been using the organization to further his agenda.

8) Another gang rape of a minor Hindu Dalit girl by Muslim youth has been reported, this time from Chilkana village in the Saharanpur district of UP. Having raped her they feared that she might reveal their names, so they killed her by forcing poison down her throat.

1) In another brutal attack on the Hindus of Pakistan, several families of the Kohli community have been driven out of their homes in Kaho, Khipro taluka of Sanghar district in Sindh province, Pakistan. Even women and children were not spared in the assault by Islamists. When the persecuted people went to the Kaho police station, they were turned away.

2) “We are helpless Hindus, we don’t have power. Our minor girls are abducted for sex-slavery in name of Islam. We requested to government, courts & Army but no one helping us”. A 13-year-old Hindu girl Fooli daughter of Mano Meghwar abducted, raped & converted to Islam in Tando Jan Muhammad.

3) In the Islamic Republic of Pakistan, Non-Muslims are considered as a curse/filth to wipe out. Muhammad Liaqat & others beat & sexually harrassed Hindu women of the Bheel community, forcing them to leave the area if they don’t want to die or raped. Village Khai, Khipro, Sanghar, Sindh-Pakistan.

4) “No God for Hindus in Pakistan”. homes of Hindus attacked, men, women & children beaten, driven out of their homes in Kaho, Khipro, Sanghar Sindh-Pakistan. They are afraid to return home & sitting outside the Khai police station but the police even refused to listen.

5) A human rights activist, Hindu youth Gardhari Lal, younger brother of Vishram Kacchi is attacked & severely injured by a group of people. He was taken to Government hospital Naukot, Mirpurkhas, Sindh-Pakistan & is in critical condition on May 27.

2) Locals Muslims attacked a Hindu temple at Haziganj P.S Chandpur on May 23.

4) Mohammad Emdad, Miraz, Reyaz grabbed homes and lands of Hindus and tried to kick out Hindu families at Batajur, Gournadi Upazila of Barishal district of Barishal Division on May 24.

5) Hindu temple in Mahishakundu village of Mominpur in Parbatipur P.S Rangpur district was attacked by Mohammad Hafazul, Mominul & others.

6) Muslim gangs led by Mohammad Mamun brutally attacked a Hindu family and Hindu women were humiliated by Muslims. Women were injured in the attack at Mehendhiganj Sadar P.S. Netrokona district on May 26.