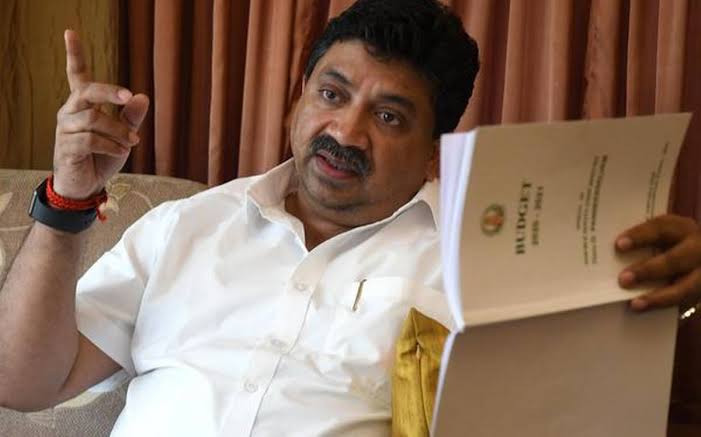 Even as the second wave of Covid-19 infections rage in the state, the Finance Minister of the newly sworn-in DMK government is on a rant against everyone who points out his flaws, and his latest target is renowned investor Mohandas Pai.

Despite many of his own well wishers’ advice to hold his tongue, Dr. P Thiaga Rajan (aka PTR) used unparliamentary language containing the most bigoted abuses to target Mohandas Pai for sharing a YouTube news video, containing some criticism of PTR, accompanied with sharp words for the minister.

The problem with dung-for-brains cultists, is they can not READ🤦‍♂️

‘Dung-for-brain cultist’ is a variant of the ‘cow piss drinker’ slur which is used to smear Hindus by Hinduphobes. This slur, which dehumanizes Hindus by denigrating their belief of the cow as a sacred animal, is used by the likes of Pulwama suicide bomber Adil Ahmad Dar, other Islamists, leftists, liberal-seculars like Sagarika Ghose, Khalistanis and others of their ilk. ‘Genetically bigoted’ can only be read as a slur targeting Pai for his ‘upper caste’ roots, as anti-Brahmin hate is the bedrock of the Dravidian ideology propagated by EV Ramasamy (aka Periyar) which DMK subscribes to.

Even before gracing the chair of FM, Dr. Palanivel Thiaga Rajan, the MLA of Madurai Central  constituency, has been displaying his arrogant and self-centred nature while targeting Isha Yoga Centre and its founder Sadhguru Jaggi Vasudev. The abuses and attacks began after Jaggi launched a campaign to free the temples in TN from government control. From then on he has been calling Jaggi names to provoke him, including publishing creatives describing him as a ‘howling hyena’.

The minister likes to take pride in the fact that he was born into a well-off land-owning family and never fails to list what his grandfather and father, HRCE minister in M. Karunanidhi’s cabinet, did for temples as ‘people of eminence’. He also claims that he is a great devotee of Madurai Meenakshi Amman and so there can never be anyone better to talk about the matters regarding temple administration than him, citing his ancestors’ deeds.

In an interview to The Hindu titled ‘Demand for freeing temples from HR&CE dept. is nonsense’, he called Jaggi a ‘publicity hound’ and accused him of being a commercial operator earning money in the name of god.

In reply to this, Isha volunteers sent a rejoinder listing out the service Jaggi and Isha foundation have rendered to the society which was simply quoted by Malini Parthasarathi (a Hinduphobe in her own right, by the way), director of editorial strategy, The Hindu, in her tweet. However the high and mighty minister took offence to it and advised Malini to seek counselling so that ‘The Hindu brand isn’t destroyed’.

It is pertinent to note here that for a party hailed as progressive and democratic by the Lutyens’ Delhi establishment, DMK has a horrible record of physically and verbally attacking media outlets and journalists which are deemed critical of it.

Thiagarajan also assured his followers that Jaggi ‘will pay sooner or later’. It is to be remembered that in his interview, he claimed that HRCE minister Sekar Babu was looking into Isha’s ‘violations’ cited in the Environmental Impact Assessment report. However the HRCE minister when asked about this didn’t confirm the same and merely said that if there are any violations he will take action, whoever it may be.

Many pointed out how minister Thiagarajan was giving interviews instead of working on things concerning his ministry and repeatedly talked about Isha and temples, when neither came under the purview of his department.

While we don’t know what transpired behind the doors, two days later he tweeted that he had to ‘focus’ on his own department and restrained himself from entertaining the press for a month. He also released a statement saying ‘I will make no statements related to Jaggi Vasudev until any new information or further developments come to light’. The statement also said that he will share the ‘evidence’ he has against Jaggi and Isha to relevant authorities. This exposed his earlier diatribe on how Jaggi has ‘violated law and will be punished’, as he made such claims even before sharing so-called evidence with the authorities.

His statement saying that he’ll abstain from making anymore comments about Jaggi was taken as an apology and many online media platforms reported it that way. One such YouTube report on the issue was shared by Mohandas Pai which invited the wrath of the minister, an alumni of the MIT university in US and ex-employee of investment bank Lehman Brothers, and led to his abusive rant.

The minister called Mr. Pai a ‘Dung-for-brain cultist, Capitation-thieving, Genetically-Bigoted, Biggest-Global-Beef-Merchant Hypocrite who rode the Narayanmurthy train to undeserved fortune’. This behavior by a public representative shocked many, as the first and foremost thing that is expected of such people is to show decorum even when criticized by members of the public. And while Mohandas Pai’s criticism of the minister was limited to his public style of working, PTR just lost all sense of proportion and revealed his virulent bigotry while lashing out.

After this even many of his supporters started asking him to concentrate on his job as the FM instead of giving in to such ‘provocations’ to ‘divert’ him from fulfilling his responsibility. While the minister is getting triggered by every other post on Social Media, nurses and lab technicians are protesting and going as far as to self immolate to get help from the government.