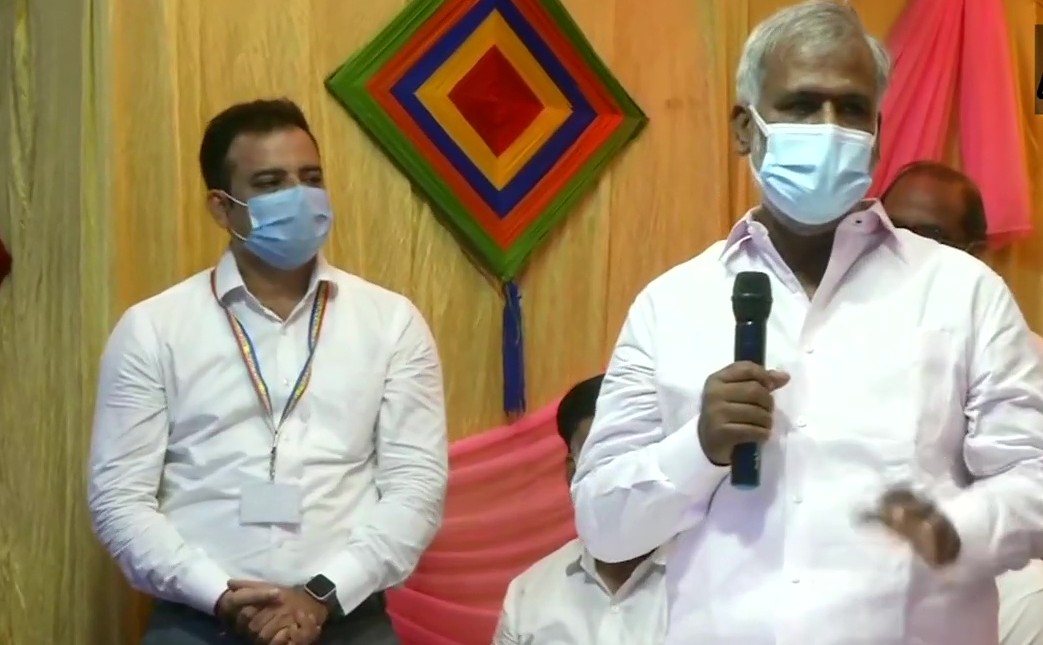 After desperately campaigning that DMK isn’t an anti Hindu party, their leaders are exhibiting their hatred towards specific communities of Hindus for countering their narrative and not voting them. HRCE minister PK.Sekar Babu’s veiled threat to North Indians living in Chennai for generations is the latest in the list. His speech shaming them for voting for the BJP candidate is on the lines of how Islamists threatened Marwaris in Trichy for funding BJP.

A Chennai based NGO Mahavir International Chennai Metro had invited the minister for an event to inaugurate the Foodbank founded by the NGO. While talking at the event the minister took a dig at North Indians settled in Chennai for choosing BJP over DMK. The transcript of his speech follows. “I have been living here for nearly 40 years. The status of North Indian friends has changed over these years and they have grown richer. It is because of Dravidian parties that you have grown rich. It was not the BJP that let you live, improved your standard of living and helped you grow rich. It was the Dravidian parties. But you’re trapped in some illusion and keep supporting that party (BJP) only.”

Video of my speech with English Translation at the event to give food on behalf of Mahavir International Chennai Metro. pic.twitter.com/lNTvDXmE4R

“Even our Loksabha MP(Dayanidhi Maran, cousin of CM MK.Stalin) often asks me why are you working for them when they didn’t even vote for us. But I would tell him “they are also sons of this soil”. An MLA is common for both those who did and didn’t vote for him. On that basis I work for you. I worked for Dayanidhi Maran in 2014 Loksabha elections but you (He singles out voters of Harbor assembly constituency where the BJP candidate polled, 32,043 votes, a respectable number as it is a DMK stronghold) didn’t vote for us in large numbers back then..and then in 2016 I myself contested for the assembly seat but even then we couldn’t tap into your vote bank. I worked for you after I was elected as an MLA in 2016.”

“I have resolved issues regarding construction of your houses without any expectations. In 2019 Dayanidhi Maran was again elected as an MP from here. But then also we didn’t get enough votes from the areas where you live in majority. It’s okay.. even after that both myself and our MP worked for your welfare. While campaigning for the latest elections I explained all of this to you that you didn’t vote for us in the 2014, 2016 and 2019 elections. I implored you to vote for us at least in this election. But let me tell you frankly, we polled only 50 votes from where you live in majority while BJP polled nearly 300-350 votes.”

“When I asked all of you in private whom you voted for you said that you cast your vote for me. Earlier when we were using ballots, papers were mixed up so we couldn’t decipher which party polled more votes in a specific area. But now everything has changed and if you tap a button on the EVM you can see how many votes a party polled in a specific area.”

When we saw this time(how many votes were polled for DMK) the party whose MLA and MP worked for your welfare didn’t get your votes. But we won’t boycott you even though you have been boycotting us and DMK is there to work for you. We don’t think of you as outsiders. We think of you as one of us”. He went on to quote a famous Thirukkural implying the meaning that ‘even if someone does harm to you, do them good and make them feel ashamed’. But the original meaning of the couplet is ,’even if someone does you harm and you feel righteous anger to harm them in revenge, overcome that anger to do them good instead and make them feel ashamed of their behaviour’.

This veiled threat of how they can identify which group is not voting for them and indirectly implying that even though they have been working for the group, they can in future target them for not voting. The speech makes it clear that if the minister and his party didn’t mind working for those who didn’t vote for them, they wouldn’t have talked about it this transparently in the first place. The minister’s words also term voting for a specific political party, BJP in this case, a ‘harm’. Every voter has a different need and voting based on them is their right. But the minister’s remarks deride those who don’t vote for the winning party and puts in question the process of election and democracy itself. Whether or not someone votes for an individual or party, it is the responsibility of the government representatives to work for the welfare of everyone.

Imagine if it was a BJP minister saying that Tamils haven’t voted for them in many elections and yet the BJP government at centre has been working for the welfare of TN. DMK trolls including so-called journalists would have descended on that minister calling him racist. One might ask aren’t North Indians settled in TN and Tamils are different to be compared like this. But PK.Sekar Babu himself is of Telugu origin and has settled in TN only a few decades before. There is a part of the Telugu community, albeit a small number, who vote for BJP. Would the minister question the allegiance of his own community then?

The minister’s remark also needs to be seen in line with Islamists demanding that Marwaris go back to their natives because they fund BJP and threatening them with violence. Apart from this, DMK functionaries have a notorious name for meddling in property disputes and threatening people with violence for money. They also have a reputation when it comes to land grabbing. The minister mentioning how he helped the North Indian community regarding construction of houses needs to be seen in this perspective as well.

How Dayanidhi Maran, an MP representing his constituents at the national level, questioned the minister why he would help those who didn’t vote for him raises doubts about how fairly the MP would treat those who seek his help. This exposes the nature of those follow Dravidian ideology on how they propagate ‘social justice’ but actually practice ‘discrimination’. While DMK supporters and office bearers argue that when the minister said they will work for the community regardless of whether they vote for them it cannot be termed as a threat, it was nevertheless a very demeaning and condescending statement, as he says ‘Dravidian parties made your prosperous’ and makes voting for BJP sound like a social crime. But we cannot ignore the suggestions of a veiled threat either seeing recent events in Bengal, and the earlier Islamist threats to Marwaris in TN.