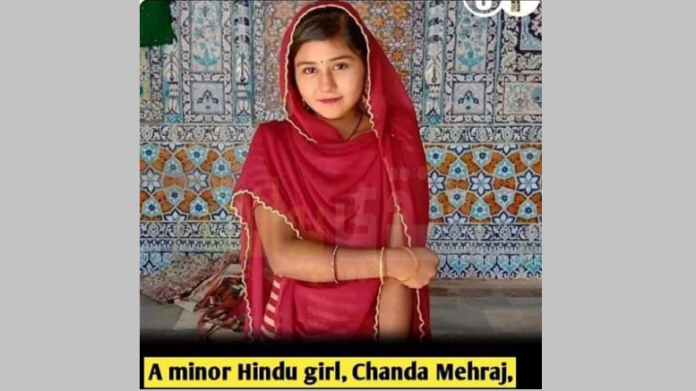 Hindus are protesting for Chanda Maharaj (Mehraj) to be returned to her parents. The 15-year-old girl was abducted on Tuesday from the Fateh Chowk area of Hyderabad, Sindh, Pakistan when she was on her way back home.

The Hindu Sindh Foundation and other human rights activists have asked the Hindu community in Sindh and across the world to support the protest taking place today in Hyderabad, Sindh for Chanda to be recovered by authorities & reunited with her parents.

Chanda’s father Ammar and her sisters said that she was forcibly abducted by people riding in a white car while coming home from the mill area of Fateh Chowk. The accused is Shaman Magsi, who always used to harass her on the way. A complaint was filed with the police, however, no recovery has been made yet.

According to activist group Voice of Sindh, they have lodged the FIR with the police and SSP Hyderabad is not ready to take action. Chanda’s parents don’t know whether their daughter is alive or has been killed.

The situation of Hindus, Christians and other religious minorities, especially that of women, is worsening in Pakistan, reported International Forum for Rights and Security (IFFRAS).

Women from Hindu and other minority communities are the worst victims of discriminatory attitudes of the authorities, political groups, religious parties, the feudal structure and the Muslim majority. These women and girls are abducted, forcibly converted, forcibly married and abused, and their families are unsuccessful in their attempts to challenge these crimes using legal avenues, reported IFFRAS.

While the abductions, forced conversions, forced marriages and abuse are perpetrated by individuals, the fate of religious minority women and girls is often sealed as the existing laws or handling of such cases deem any legal recourse unavailable or ineffective. Human rights groups have documented the plight of Pakistan’s religious minorities for years, but it is only recently that these minorities have become the focus of popular discourse because of revelations on social media regarding their treatment, reported IFFRAS.

Abducting for the purpose of forced conversion and marriage is a major issue in Pakistan. Most of the victims are Christian and Hindu girls and young women, forced to wed against their will to much older Muslim men.

Here is one such case, in which the victim was ‘lucky enough’ to escape after a hellish experience – “Earlier in August 2021, a young Masih girl named Anita was abducted by a Muslim man Muhammad Waseem From Yazman City, Bahawalpur. She said he forcibly converted her to Islam by taking her thumb impression on a paper and forcing her to accept him as her husband. He kept the victim in a locked room and repeatedly raped her, reported local media.

In September this year after more than a year of torture, the victim Anita fled from her abductors and filed a petition in the Family Court at Bahawalpur seeking annulment of the False/Forced marriage, according to local media.The father of the victim said he is very poor and the abductor is a Muslim and very influential. The abductor restricted the victim’s family from filing any complaint regarding the kidnapping of their girl by giving them death threats and they are seeking protection from the court.”

Chanda’s case has been covered by some Bharatiya news outlets; see this Hindi news report about her abduction, which says it is the ‘4th case in just 15 days’, including both minor girls and married women. But abduction and rape of Hindu girls occurs each day in Pakistan, and most of these cases barely make it to media. Here are some more recent cases – this, this, this.