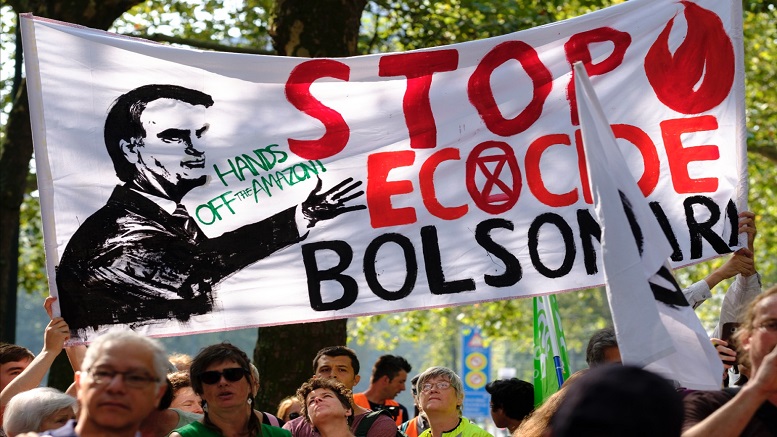 Sadly, the cultural genocide of indigenous communities in the Americas by Christian missionaries which we discussed in a previous post is an ongoing project that continues even today. Brazil is just one more example of this.

Back in 2018, The Atlantic had reported a marked rightward shift in religious, political, and social views in Brazil. The shift coincided with the massive “growth in the country’s Evangelical Protestant and Pentecostal churches.” Per the report, Evangelicals grew from 6.6% in 1980 to 22.2% in 2010.

According to Brazil’s Commission to Combat Religious Intolerance, over 100 Afro-Brazilian religious facilities nationwide were attacked by drug trafficking groups in 2019, an increase on previous years.

… Persecution of these Afro-Brazilian religions, whose adherents are largely poor black Brazilians, has been around since at least the 19th century.

The increase in these hate crimes is directly proportional to the increase in the clout of Evangelicals in Brazil. The fastest growing Christian denominations in Brazil are the Pentecostal and Neo-Pentecostal churches including the ‘Assembly of God’ and the ‘Universal Church of the Kingdom of God’.

Bharat too is familiar with missionary activity mainly targeting tribal indigenous communities. The North East is today a den of strife and conflict, thanks to such proselytization.

In Brazil, cashing in on poverty and selling the “prosperity doctrine” to lure the poor indigenous communities, the missionaries have been able to make rapid inroads. As stated by Muggah, between 2000 and 2010, the followers of the Afro-Brazilian religions Candomblé and Umbanda declined 23%.

A previous post provides a background on Brazil’s indigenous communities:

Brazil, a nation which was brutally overrun and conquered by Portuguese colonisers, has a very small indigenous population who still follow their ancestral belief systems and lifestyle. Only 900,000 indigenous people, or 0.4% of Brazil’s population, spread across 300-odd tribes survive in Brazil today. The government has recognized 690 territories for its indigenous population, covering about 13% of Brazil’s land mass. Nearly all of this reserved land (98.5%) lies in the Amazon. 87% of the country is Christian (65% Catholic and 22% Evangelical Protestant).

Muggah says that the Afro-Brazilian faiths are presented as “evil” much like the vilification of African traditional faiths including Voodoo. In a book called “Orixás, Caboclos and False Gods or Demons,” Macedo, a Bishop from Brazil’s ‘Universal Church of the Kingdom of God’ wrote that the Afro-Brazilian faiths aim to “keep us from God,” and are “enemies of Him and the human race.”

The calls for a holy war to cleanse the world of “evil” practitioners of Candomblé and Umbanda –have translated into gang violence against indigenous community members who are adherents of these Afro-Brazilian faiths.

That includes a handful of drug kingpins, who prohibit adherents of Afro-Brazilian religions from practicing their faith in gang-controlled neighbourhoods. Residents caught wearing the religious garb of Candomblé and Umbanda may be expelled from the community.

And, making matters worse, the Evangelical faith groups control the running of social programmes in Brazil’s overcrowded prisons, thus spreading Charismatic Christianity in the criminal system. Prisons are dominated by drug trafficking groups that then take on the task of persecuting and terrorizing indigenous adherents of Afro-Brazilian faiths. In other words, the Evangelical church system is using criminals to promote its faith and to persecute indigenous groups which continue to follow their traditional faith.

In February 2020, the plight of indigenous communities was made worse when the Brazilian government, under their far-right President Jair Bolsonaro, appointed a former Evangelical missionary Ricardo Lopes Dias as in charge of its isolated indigenous tribes. Critics of the move said it would give Dias access to information “on 107 isolated tribes including on their location,” thus paving the way for missionaries to infiltrate these areas to persecute the indigenous people.

A UN special rapporteur said “This is a dangerous decision that may have the potential to cause genocide among isolated indigenous people.” The report also mentions Bolsonaro’s racist credentials:

Bolsonaro has frequently made racist remarks about the country’s indigenous people, recently commenting that they were “increasingly becoming human beings just like us”.

Under Bolsonaro, many have expressed fears of Brazil becoming an Evangelical Theocracy. A recent report states that Evangelicals in Brazil are stronger today than ever before.

The apprehensions expressed by indigenous experts on Dias’s appointment proved correct and Evangelical missionaries initiated contact with remote tribes for conversion. Further, a July 2020 legislation allowed missionaries to remain in these remote areas. Groups representing the indigenous communities went to court to contest the contact with isolated communities. A Mongabay report quotes Eliésio Marubo, one of the opponents of missionary overtures:

The culture of our people is also weakened because certain practices are forbidden [by the missionaries], like traditional medicine…The relationship with the territory also changes. Before, we used to move around a lot, but the missionaries want us to stay in one place only.

Another opponent Aparecida Vilaça called it cultural destruction. She said:

They do a very deep process of humiliation of the traditional practices, by saying their dances and beliefs are things of the devil…

Christian missionary activity provides a foothold to spread colonialism which aims at profiteering at the cost of indigenous groups. Like always, this is again confirmed in the case of Brazil, where, in June 2021, groups protested against Bolsonaro saying his state policy is plunder and deforestation of the Amazon, what they term as ‘ecocide.’ The protests were sparked after five Guajajara tribesmen in Brazil were killed by gunmen in a five-month period.

Indigenous chiefs and human rights organizations have linked such killings to a “state policy” implemented by Brazilian President Jair Bolsonaro to “plunder the wealth of the Amazon,” and asked the International Criminal Court to open an investigation into whether the actions of the far-right leader and other top Brazilian officials constitute crimes against humanity.

The experience of indigenous people all over the world shows us that wherever European colonialism spread, missionaries were at the forefront and often worked hand-in-glove with colonial rulers. They provided the religious justification for the ‘civilizing mission’ that colonial powers used to cloak their genocide and loot.

…And America is the hub of these global missionary supremacists, although European countries like UK, Germany, Holland, Denmark etc also fund them in a big way, including through government grants.

… the mainstream view in Western society is that missionaries are working for the ‘greater good’. Even those Westerners who claim to be ‘left-wing progressives’ or atheists do not oppose missionary activity, because ultimately they believe in the superiority of Western civilization and in Western Universalism. Also, missionaries are a good way to meddle in the internal affairs of ‘developing’ countries. They provide a useful stick to beat nations like Bharat in the name of ‘religious freedom’ and ‘human rights’.

The missionary sponsorship from the West poses a threat to all traditional and benign spiritual faiths and ways of life worldwide. This calls for the world’s traditional spiritual systems and so-called pagan faiths to unite to combat this menace.

The non-Christian and non-Muslim world must come together to ban these global Abrahamic missionary networks which are threatening the harmony and religious-cultural diversity of the entire world. Mutual Respect and not just tolerance must be our motto for the 21st century.

Say no to conversion