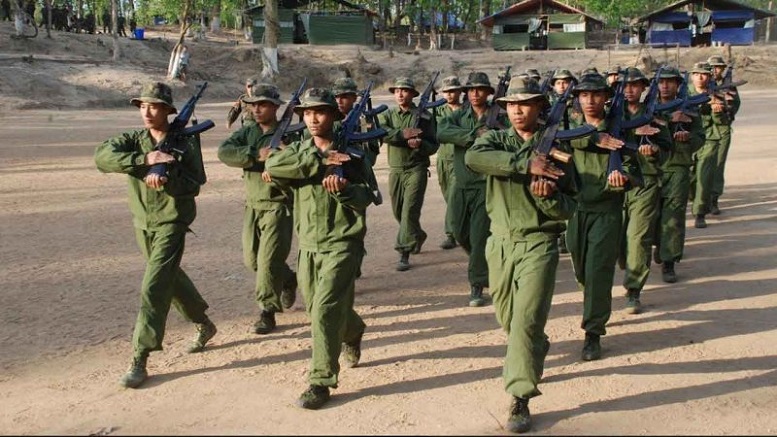 The terrorist insurgency landscape in the region is the outcome of an interplay of these factors.

As described in this study by Bhaumik:

After partition, the 225,000-square-kilometer region remains sandwiched between Chinese-Tibet, Burma, Bangladesh and Bhutan, linked to the Indian mainland by a tenuous 21-kilometer wide “Siliguri Corridor.” It is a polyglot region, its ethnic mosaic as diverse as the rest of the country.

It has 213 out of 635 tribal categories and 175 out of 325 languages listed in the “People of India” project. The languages are from the Tibeto-Burman and MonKhmer family. Among the tribes in the region, Manipur has the Khaplang, Isak-Muivah, Meitei, Hmar, Pangal, Paite, Vaiphe, Kuki, and Zomi. Meghalaya has the Khasi-Jaintia, Synteng, and Garo tribes. Assam and Arunachal Pradesh have the Tani tribe, (also called Mising in Assam and Adi, Nyishi, Galo, Apatani, and Tangin in Arunachal Pradesh, and Lhoba on the Indo-China border).  The Hmar tribe is spread over Assam, Manipur, Mizoram, Tripura, and Meghalaya.

Different tribal groups assert claims over geographical territory ranging back to the British period and even earlier. The recent Assam Mizoram border issue exemplifies conflicts of this nature.

Porous borders shared with Bangladesh, Bhutan, and Myanmar led to a post-partition increase in the inflow of migrants mainly from Bangladesh leading to demographic changes and tensions between the local and illegal immigrants. Bhaumik’s paper says:

Tripura’s demography changed qualitatively in two decades, with the Bengalis becoming a clear majority. The pace of demographic change was slightly slower in Assam than in Tripura, but it was pronounced enough to upset the “sons of the soil,” provoking both armed and unarmed protest movements. The fear that other north-eastern states would “go the Tripura way” has weighed heavily on indigenous peoples and early settlers throughout the north-east and provoked the more militant of them to take arms.

Due to missionary activity and Christianization of the tribes, religion has become another major factor in the insurgency problem.

Along with tribal identity, Christianity has introduced a major fault-line in the North-East insurgency landscape.

The Bhaumik paper describes the impact of Christianity on insurgency.

Religious distinctiveness, when coterminous with ethnicity, exacerbated the sense of otherness in the Naga and the Mizo hills. Since the tribes people in both these former head-hunting hill regions had been largely converted to Christianity since the last quarter of the nineteenth century, they felt emotionally alienated from the Indian cultural ethos, which was often equated with the “Hindu entity.” Christianity reinforced and complemented, rather than supplanted, the sense of distinct ethnicity and otherness among the Nagas and Mizos.

Separatist groups such as the Naga National Council (NNC) and the MNF laced their separatist rhetoric with free use of Biblical imageries—and the MNF even christened its military operations (e.g., its first uprising on 28 February 1966 was referred to as “Operation Jericho”). When the NNC decided to send the first batch of Naga rebels to China, the powerful Baptist Church was upset with the rebel leaders. The NNC as well as the NSCN, which is led by the China-trained Thuingaleng Muivah (who continues to revere Mao Zedong and Zhou Enlai as the “greatest leaders of the century”), have subsequently made conscious efforts to appease the church.

“Nagaland for Christ” is the NCSN slogan:

This writer found the “Nagaland for Christ” slogan boldly hanging over the churches in the NSCN camps where Sunday services were regularly performed by the NSCN’s “Chaplain Kilonser” (religious affairs minister) Vedai Chakesang and his team. Though personally attracted by Marxism-Leninism and Mao Zedong thought, Muivah was quick to see that most of his leaders and fighters were devout Christians, and that religion and ethnicity could complement each other to foment separatism among the Nagas.

The MNF was much more serious about its Christian identity and much more particular about fostering religiosity. Senior leaders … personally conducted church services in the rebel camps…

About another Christian outfit, the National Liberation Front of Tripura (NLFT), Bhaumik says that it “not only pursues violent ethnic cleansing against Bengalis and smaller tribes such as the Reangs and the Chakmas, but also declares “evangelization” of the tribes of Tripura as a key objective.”

On evangelization in Tripura:

… first-generation Christian converts constituted a large percentage of the leadership and the fighters of the Tribal National Volunteers (TNV). Its chairman, Bijoy Hrangkhawl, remains a devout Christian. Non-Christian tribesmen who joined the TNV were encouraged, though not forced, to convert. But the state’s strongest rebel group now, the NLFT, insists on conversion of non-Christian recruits.

… Even after the NLFT “banned” the worship of Durga (Goddess of Power), Saraswati (Goddess of Learning) and Laxmi (Goddess of Wealth) in the hills, the spiritual head of the Jamatia tribe, “Hada Okrah” Bikram Bahadur Jamatia performed the Pujas (worship). But his followers had to face attacks and Bikram Bahadur  Jamatia escaped two assassination attempts. Some leading tribal priests, such as Shanti Kali, were killed by the NLFT; even their womenfolk were raped by the rebels. On 7 August 1999, the NLFT kidnapped four senior leaders of the Hindu nationalist Rashtriya Swayamsevak Sangh (RSS). All four are said to be dead. The NLFT allegedly enjoys the support of the Tripura Baptist Christian Union (TBCU). According to TBCU sources, both voluntary and forced conversions to Christianity have increased among the tribes people in Tripura since the TNV, and then the NLFT, intensified its activity.

The Reang and Chakma tribes complain of ethnic and religious persecution and allege that the dominant Mizos, almost wholly Christian, want to convert them to Christianity and the Mizo way of life.

The converted tribes have been made to believe that they can only co-exist with fellow Christians. As mentioned in an earlier post, in Mizoram, the Hindu Reangs/Bru and Buddhist Chakmas have been driven out, but the state’s Christian administration is eager to accommodate Myanmarese Christians who entered the region illegally.

Since the 1980s, Pakistan’s Inter-Services Intelligence (ISI) has also used Bangladesh to establish contact with some of the rebel groups from Northeast India. A few of them have received weapons, specialized training in explosives and sabotage, and even funds. Surrendered insurgents have said the ISI has encouraged them to take on economic targets such as oil refineries and depots, gas pipelines, rail tracks and road bridges.11 Burma and Bhutan have also been used as sanctuaries by some of these rebel groups but there is little evidence of official patronage from governments of those countries. There are some unconfirmed reports of Chinese assistance to the NSCN, the Meitei rebel groups and the United Liberation Front of Assam (ULFA).

…The PLA’s core leadership was trained in China…Thuingaleng Muivah, the present general secretary of the NSCN. Muivah says he had some exposure to Marxist-Leninist ideology before he led the first batch of Naga rebels to China in 1966 at the beginning of the Cultural Revolution.

…China, which trained and armed several batches of Naga, Mizo and Meitei since 1966, had stopped help by the early 1980s. By then, however, Bangladesh’s military rulers…had revived the Pakistani policy of sheltering, arming and training rebel groups from northeast India. Almost all the separatist groups in the Northeast—Nagas, Mizos, Meiteis, Tripuris, and now even those from Meghalaya—have subsequently received shelter and support in Bangladesh.

As the table shows, many foreign powers have played a role: Until 1971, the US aided insurgency in the region through the ULFA; China played a role in the earlier years; and Pakistan and Bangladesh are actively involved now. But Christianization of indigenous groups is one leading factor driving the call for separation from the Bharatiya state. Additionally, Islamist insurgent groups have come up after massive illegal immigration from Bangladesh. The most notable factor is the nexus between these break-India forces: the Christian and Islamist outfits, neighbouring Islamic nations, Pakistan’s ISI, and the church in the background

Meeting with an educated Hindu who had converted to Christianity