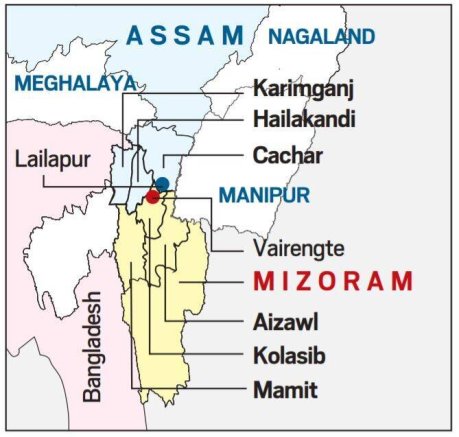 On July 26, five policemen and a civilian from Assam were killed in border clashes between Assam and Mizoram. The clashes took place in Mizoram’s border town of Vairengte and involved Mizoram police. The names of the Assam policemen who were killed are: SI Swapan Roy and constables Liton Suklabaidya, MH Barbhuyia, N Hussain, and S Barbhuiya.

The disputed border lies between the Kolasib district of Mizoram and the Cachar district of Assam. The Vairengte town is located in Kolasib. In October last year, there were skirmishes between residents of these two districts. The two states share a 165-km border which covers Cachar, Hailakandi, and Karimganj districts of Assam and the Kolasib, Aizawl, and Mamit districts of Mizoram. The Cachar district also shares a border with Manipur, Tripura, and Bangladesh.

Assam is ruled by BJP while Mizoram is ruled by the Mizo National Front which is said to be an ally of the BJP and both parties are members of the North-East Democratic Alliance (NEDA). Assam’s CM Himant Biswa Sharma is the founder convenor of the NEDA. The two CMs had only recently met with the Home Minister Mr Amit Shah for resolving the inter-state border dispute.

The Assam-Mizoram border dispute dates back to the British period. The present day Assam districts of Cachar, Hailakandi, and Karimganj constitute the Cachar plains and Barak valley where British tea plantations were created in the mid-19th century. Expanding the area under the plantations led to problems with the Mizo occupants of Lushai hills.

In 1875, an exercise for demarcating Lushai Hills (in present day Mizoram) from Assam’s Cachar plains was conducted. According to the Mizos, the August 1875 demarcation was the fifth time that a boundary line between the Lushai Hills and Cachar plains was drawn and this was the only time when Mizo chiefs were consulted. This demarcation became the basis of the Inner Line Reserve Forest demarcation that was published in the Assam Gazette two years later.

Once again in 1933, the British made demarcations based on linguistic, cultural, and tribal criteria during which a part of Lushai Hills went to Manipur. The Manipur boundary began from the tri-junction of Lushai Hills, Cachar district, and Manipur state. The Mizos do not accept the 1933 demarcation and consider the 1875 one made in consultation with their chiefs as the acceptable one.

During Independence, the North East was composed of only Assam and the two princely states of Tripura and Manipur. It was only in 1963 that the other four states, Nagaland, Meghalaya, Arunachal Pradesh, and Mizoram were carved out of Assam. States were created based on cultural identities. Nagaland was created in 1963, and Arunachal Pradesh, Meghalaya, and Mizoram as Union Territories in 1972.  Subsequently these Union Territories were given statehood. Mizoram got its present day identity of full statehood in 1987.

For carrying out the 1875 demarcation, the British issued a regulation in 1873 called the Bengal Eastern Frontier Regulation (BEFR) defining the Inner Line Permit (ILP) Systems. This regulation was done away by Assam and other states of the North East but the states of Mizoram and Nagaland have continued with the BEFR. Based on the BEFR, Mizoram claims a 1318-square-km Inner Line Reserve (ILR) forest area which Assam is not willing to give up. Mizoram in fact backed the BEFR notification with a 1993 Inner Line of Lushai Hills notification. Since the 1993 notification, many attempts to solve the border dispute were made but there was no resolution.

In 2005, the Supreme Court asked the centre to create a boundary commission for resolution of the dispute.

Assam and Mizoram had an agreement whereby status quo was to be maintained in the no-man’s land in the border area. The status quo was first disturbed in 2018 when the Mizo Zirlai Pawl (MZP), a students’ union, built a wooden rest house on land claimed by Assam. This was demolished by Assam police.

The July 26 clashes were the culmination of events that began in June, the same month when Assam was also in a border row with Meghalaya. During the same month, Mizoram and Assam both exchanged accusations with Mizoram saying that Assam had encroached on its lands in Kolasib and Assam accusing Mizoram of carrying out plantation activities 10 km inside Assam’s Hailakandi district. Heightened tensions led to a grenade being flung at the Assam government team on July 10. On July 25, 5 farmer huts belonging to Mizo farmers were burnt down culminating in the July 26 violence.

Mizoram is almost completely a Christian state and some revelations have come up regarding its history which show how  the original inhabitants of the region–the Hindu Reang and the Buddhist Chakma–were ousted from the region.

The Mizo tribe that originated from a part of China was mass converted to Christianity. Mizoram was also in the news a few months ago for wanting to settle Myanmarese Chin Christians in the state while it has thrown out the Hindu Bru/Reang tribals.

Regarding the current border skirmish, those on the Mizoram side claim that the border they share with Assam is occupied by Bengali Muslims who could be undocumented illegals, leading to distrust on the part of Mizoram. After the current skirmish, the MZP blamed illegal Bangladeshis on the Assam side for the row. “Illegal Bangladeshis are creating all this trouble. They come and destroy our huts, cut our plants and this time pelted stones on our policemen,” MZP President B. Vanlaltana said.

Another explanation given for the border conflict is that the border between the two neighbouring states is fuzzy due to the topography composed of rivers, hills, valleys, and forests. The lack of clarity makes people cross over to the other side as they are not fully aware of the demarcation.

Political commentator Kham Khan Suan Hausing in an Indian Express op-ed said that Assam CM Sarma’s decision to deploy additional paramilitary battalions at the border may secure transient peace but CM Sarma and the Mizoram CM Zoramthanga would at some stage need to sit down and negotiate a solution that resolves the issue for good. Hausing also said that the top-down approach to fixing borders through political mediation does not work and the process needs to be people centred. Would such a solution also consider the fate of the Bru/Reang and Chakma tribals ousted by the Mizos?