Another Hindu temple vandalised in USA, ‘Jesus is the only God’ graffiti painted In a hate crime, a Hindu temple has been vandalised in the US state of Kentucky by miscreants who sprayed black paint on the deity, wrote graffiti like ‘Jesus is the only Lord’, and left a knife stabbed into a chair in the main hall.

The incident happened between Sunday night and Tuesday morning at the Swaminarayan Temple in Louisville city, news agency PTI has reported.

The vandalism resulted in deity image sprayed with black paint, broken windows, walls spray-painted with inappropriate messages and graffiti. A knife was stabbed in the chair, and cabinets were emptied.

While the PTI report is silent about the exact content of the ‘inappropriate messages’, local US media outlet wave3.com informs us that the majority of the messages were different variations of the phrase “Jesus is the only God.” There were also expletives spray painted in another room. Another Kentucky news portal wdrb.com tells us that spray-paint on a bulletin board labels the Hindu community as “foreign b*****s.”

The Christian cross was also spray pointed on various walls. A children’s playroom in the temple premises was also not spared. 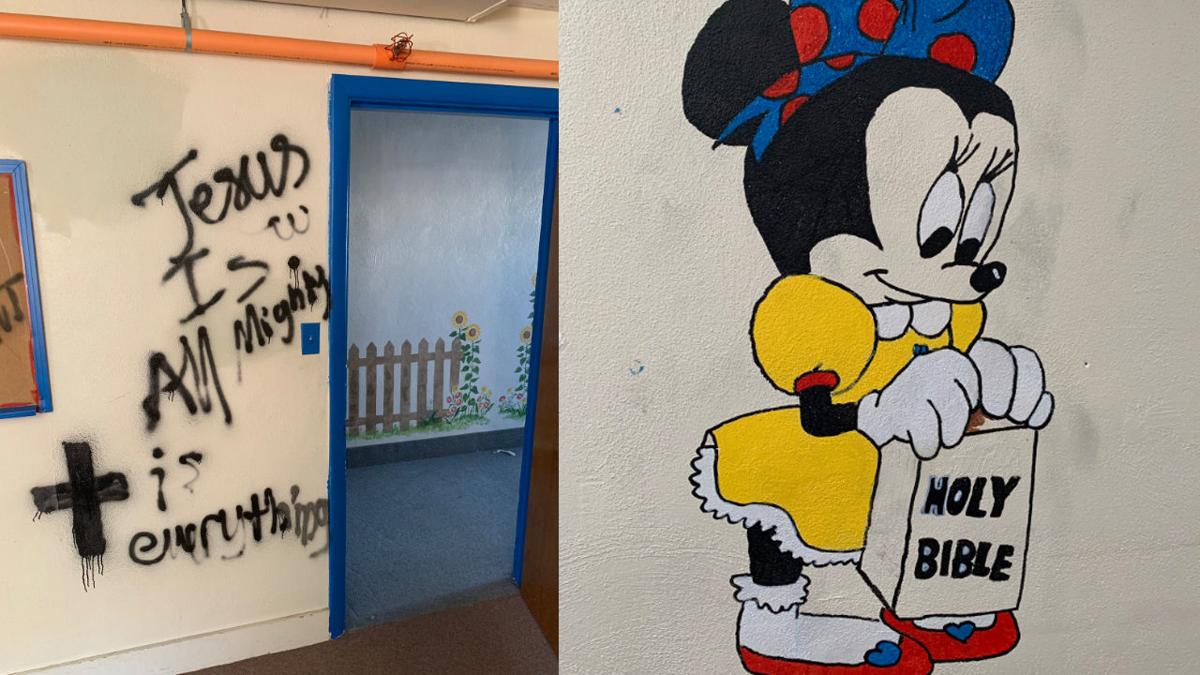 The incident has sent shock waves through the Indian-American community in Louisville Kentucky. Authorities are investigating the incident as a hate crime. Condemning the incident of vandalism, Louisville Mayor Greg Fischer called upon the city residents to stand up against this hatred.

“Anytime we see hatred or bigotry we will stand against it. The cowards who did this have only given our community more fuel and determination to embrace compassion, understanding, and each other,” Fischer said as he visited the vandalised temple Wednesday.

The vandalism of this temple, Fischer said is another example of the work “we still have to do as a city and a nation to make sure we live to our ideals of equality, of a country where everyone is treated with the respect we all deserve.”

“Regardless of what religion you are, this should not happen,” Raj Patel from the Swaminarayan temple said. “We come here to worship. We should not have to turn our backs to see who is behind us, but we should be happy to come here and worship in peace,” he added.

Commenting on the messages proclaiming ‘Jesus is Lord’, Patel said “Jesus is Lord. Which is fine. We were OK with that message.” But he’s not OK with everything else. A vandal defaced a poster of his god with paint and sacked part of the sanctuary too. In that most sacred part of the temple, Patel said a vandal tampered with a safe and lodged a knife into a chair. But most concerning is a profane message directed at those who worship at the temple. Spray-paint on a bulletin board labels them as “foreign b*****s.”

“Now, it’s not about just a god,” Patel said. “It’s about a race or someone’s skin color.”

Kentucky State Representative Nima Kulkarni, the first Indian-American elected to the Kentucky General Assembly, said the vandalism was an “act of intimidation designed to weaken our faith and community”.

There has been a number of such incidents across the US in previous years. In April 2015, a Hindu temple in north Texas has been vandalised with nasty images spray-painted on its walls. In February 2015, Hindu temples in Kent and the Seattle Metropolitan area were also vandalised.

Defilement of Hindu temples and breaking of murtis (incorrectly termed ‘idols’ by Abrahamic supremacists such as Christian evangelicals and Islamists) is a common occurrence across the world, with such incidents being reported from places as wide apart as Fiji, Australia, Bangladesh, Pakistan, Bharat, Mauritius.

For fundamentalist adherents of Abrahamic faiths like Christianity and Islam, there is possibly no greater sin than ‘idol worship’ and hence Hindu temples are an easy target for their hate and bigotry. They believe that as per the tenets of their religion, non-believers are bound to burn for eternity in hell, and hence they are doing a favor to ‘heathens’ like Hindus by proselytizing and bringing them ‘good news’ from the Bible.

It is not surprising that this religious hate crime took place in a state like Kentucky, which is considered part of the ‘Bible belt’, a region in the Southern United States where evangelical Protestantism plays a strong role in society and politics. 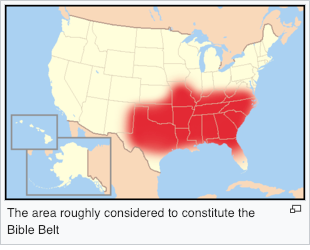 Evangelical Protestant denominations like Pentecostals are some of the most aggressive missionaries who use every means possible to convert non-Christian indigenous populations by denigrating their traditional beliefs, in a well co-ordinated, well-funded international mission that uses modern management techniques like the theory of the ‘10/40 window‘ to achieve their end goal.

Yet, if one reads the influential Western media, one will scarcely hear about this sustained campaign of hate and bigotry directed against Hindus, who ironically are one of the most well-educated, integrated, hard-working and peaceful communities wherever they have settled in the world.

In 2015, a few random incidents at churches in Delhi involving short-circuit, drunkards breaking a window pane, petty theft were blown up to drive mass hysteria of ‘Christians under attack’. The propaganda was instantly picked up the Christian news network and even made it to mainstream media in the West. Even the then US President Barack Obama weighed in, claiming that ‘Mahatma Gandhi would have been shocked at the acts of intolerance in the country famed for its diversity’.

But while the US Government is quick to take up cudgels for any perceived or actual persecution of Christians, and Islamic countries do the same for Muslims, whether anyone in a position of power speaks up for this assault on the Hindus of Louisville, remains to be seen. Most Hindus have internalized their second-class global position to such an extent that they are reluctant even to condemn the message “Jesus is Lord” spray-painted on their temple wall, fearful that this will offend the majority Christians in their adopted country. Unless we rediscover our self-respect and start asserting our right to equality and a dignified existence, things are unlikely to change.