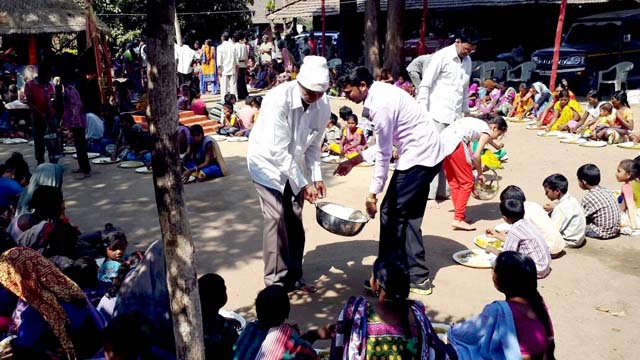 A traditional bhandara, i.e. community prayer and meal, during the festival of Ram Navami in the town of Jalgaon Jamod, Buldhana district Maharashtra, was attacked by Muslim fanatics on Saturday night. Members of the ‘majority’ community were assaulted, a temple wall was brought down, murtis vandalized, prasad (divinely blessed food) spilled on the ground, Hindu houses, shops and other property to the tune of lakhs of rupees looted or destroyed. When police arrived, even they were attacked leaving 6 policemen injured, before tear gas and air firing was used to finally bring the situation under control.

Police have arrested 87 people and imposed curfew in troubled parts of the town. The administration has severed all telecommunications links and media is also not being allowed inside the town.

The incident occurred around 8 PM at night when devotees were collecting eatables (Bhakri) from households for their distribution as prasad marking the culmination of Ram Navmi festival. “Trouble started when a tractor collecting food was stopped by some people,” police inspector Vijay Patkar said.

While a highly sanitized and watered down versions of the violence has appeared in English media outlets, this Saamna report gives the details –

“As devotees were collecting the prasad in a tractor, local Islamists started arguing and toppled the tractor upside down in which Bhakri was collected. Prominent in the group were SIMI leader Asif Iqbal, Alim Babbu, Aziz Babbu Nimkadiwale, and Urdu school teacher Sharif Master. After this they brutally assaulted the volunteers doing the food collection – Haridas Dhage, Ram Wankhede, and Nandu Dalal. Soon a large mob started assaulting nearby Hindus and panic spread through the town. They attempted to assault Hindu ladies preparing food for the bhandara but were prevented from doing so.

As local police authorities arrived on the site, they were pelted with stones which left several police personnel injured – Subhash Waghmare, Bhushan Solanke, Gajanan Narote, Kailash Pandit, Deepak Sapkal, and Inspector Salunke. Finally, police had to burst tear gas shells and do air firing to bring the situation under control.”

Administration tries to hush up the matter

Overnight, the police authorities repaired the destroyed wall of the Bembleshwar mandir and also cleaned the other vandalized temples to suppress the extent of damage caused. Media persons have also been barred from entering Jalgaon Jamod town. One can only hope that crucial evidence from the crime scene was not destroyed in the haste to do the clean up.

As per HinduPost sources, details of damage caused are as below –

Similar to the violence in Jamod, Jharkhand also witnessed pelting of stones, violence and arson during Ram Navami celebrations. Violence occurred at multiple spots in Bokaro and Hazaribagh districts, killing 3 (although police are claiming that these deaths are unrelated), injuring many and destroying property.

Such violent attacks during Hindu celebrations is a common feature of life across Bharat – whether it is Ram Navami, or Ganesh Chaturthi in Tamil Nadu or Karnataka, or Durga Puja in West Bengal, or Hanuman Jayanti in MP, or  just a regular Hindu wedding procession in Gujarat. This is the real face of intolerance which the so-called ‘majority’ faces daily on the ground. But of course, debating this real intolerance is taboo for our elites in media, politics and civil society. They reserve their outrage and breast beating op-eds for short-circuit fires in Delhi churches.

The first step in tackling a problem is acknowledging that it exists – our elites will never acknowledge this as it will undermine the highfalutin and dangerously flawed liberal-secular theories they have decided to impose on the nation, but it is high time that the Hindu masses woke up to this deadly reality.

The earlier version of the article incorrectly mentioned Prakash Bhutad’s shop that was looted as a chappal shop, whereas it was actually a seed and fertilizer shop. The error is regretted.