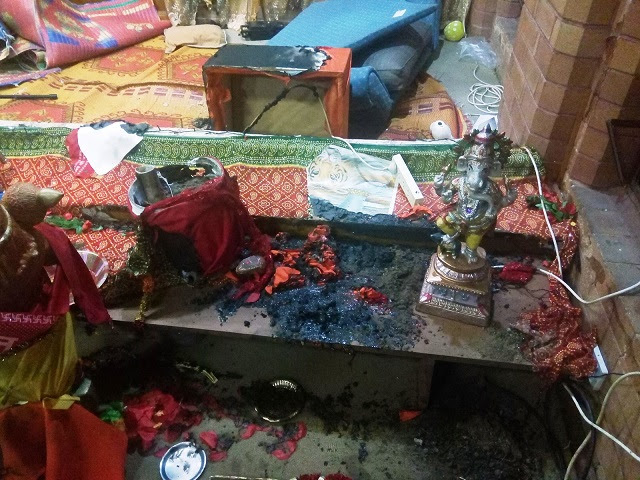 A Hindu Temple situated at Regents Park in Sydney, Australia has been set on fire and all murtis (embodiment of a diety) and icons of Hindu Gods have been smashed and left in ruins. Locals do not know who has done it but it has caused a lot of pain and anguish to devotees celebrating the festival of NavRatri or nine nights dedicated to worship of God in female form. Popularity of the NavRatri period for Hindus can be compared to popularity of Christmas to Christians, but it continues for a period of nine days to worship nine different form of female Shakti or source of power, or God manifest as and in this world. The Regent Parks temple has been there for about twenty years and, but for an incident of stone throwing ten years ago, the Fiji Hindu community has not had any problems until now. During the period of nine days of NavRatri, Hindus hold regular prayer sessions in the evening. When devotees came at 6pm to open the temple on Sunday evening, 14th October 2018, they found smoke coming from inside their temple. Upon investigation, they found some people inside and when challenged, the miscreants jumped out of the window and vanished. The head priest of the temple Pandit Paras Ram Maharaj was in tears on seeing his Gods broken and strewn all over the floor. The vandals had not only desecrated the murtis and icons but had also thrown prayer material around. They had even set the altar on fire. Luckily, the fire was quickly brought under control before it could do any further damage to the temple and the building. The temple is visited regularly by about 250 devotees who come from all over Sydney including from places as far away as Penrith.

After serial coups in Fiji, a large number of Fijians of Bharatiya (Indian) descent had migrated to Australia. About twenty years ago, some of them collected funds while others put their homes on mortgage to raise funds and purchased an old Anglican church building. The devotees were all Hindus and brought their own Hindu icons to install in their new temple. Being an old church building, the building has a typical church architecture with lead glass colored tinted windows and a wooden cross which is almost a part of the wall.

Although as owners of the building, they could have removed previous faith symbols, the temple committee decided not to remove or dismantle old christian symbols. They placed their Gods beside these symbols and started their worship in their new temple. There is only one God and different people worship HIM in different forms believe Hindus. So, how could these Hindus show any disrespect for the symbols of God worshiped by earlier and different devotees?

A young Hindu girl broke in tears and asked me, when we respect their symbols of God so much, why have they desecrated our forms of God? This sobbing young girl had spent countless hours in decorating the temple which has now become a crime scene with broken glass strewn all over.

Her mother who had come to the temple with her other friends ready to do the prayer on the fifth day of the nine day long NavRatri celebration was in a state of shock. NavRatri prayers are done together communally and now there was no place left to conduct prayers. Quickly, the kitchen building next door was vacated and converted into a make-shift temple to continue the most important rituals of the day. The police came and did their forensic work and left at 2 AM next morning.

The big worry we have now, said the temple president, is to restore the temple building back to its earlier glory. We will rebuild the temple he said with determination, we are not going to go away, this is our home too. Australia is a fair society. It has given us freedom to practice our religion. A few miscreants among them can not scare us away. Other committee members had more pressing thoughts and were discussing practical matters like how shall we raise funds to restore our place of worship.

Donations to reestablish the previous glory of the temple can be made at https://bhartiyemandirsydney.org/donations/

It is time that Australians of all walks of life show their solidarity with us Australian Hindus.

It is time for leaders of all faiths to come in our support and condemn this criminal act by a few vandals who do not represent ‘fair dinkum’ Australia.

It is time for elected local, state and federal representatives to come and wipe the tears of that young girl and assure her that you are also a valuable part of our society and are free to practice your faith.

It is time that state and federal Parliaments pass a resolution condemning this disgraceful act.

If it has happened to one temple today, it may happen to other places of worship tomorrow.